Utah Jazz Forward Josh Howard will miss the remained of the season after an MRI identified a chip in his femoral cartilage. This is sad news because you do not want to see a player go down with an injury -- but the silver lining suggests that this is not the worst news ever. Howard is going to still be able to walk, he'll be repaired and still be able to find work playing basketball after rehab. This is not a career ender. Second, he was having a bad season - no matter how much you may over-value rebounding from the SF spot when you already have Al Jefferson, Paul Millsap, Enes Kanter, and Derrick Favors on the team. I'll go into the stats a little bit later. Third, this makes playing the 'better players' easier for Head Coach Tyrone Corbin. The 'better players' are also the younger players, and politically, this makes life so much easier for Ty. 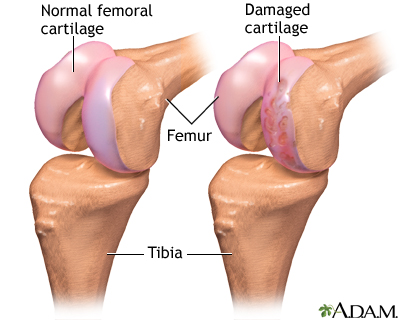 This is not the exact injury, however it is a good place to start to see the difference in a healthy cart, and one that has some tears in it. There are a number of things you can do about this; but because this is a basketball board let me get to the chase and say that he'll be healthy enough to fight for a contract by the time next year rolls around. This isn't going to take food off his table. He's still going to get paid all $2.15 million the Jazz "owe" him this year for his 8.7 ppg (39.7 fg%), and 3.7 rpg, while getting a 10.5 PER rating and letting his man own him in opponents points per possessions (#256 in the league).

What he brought to the table:

He was a veteran who came to Utah to play with his buddy Devin Harris so he could resurrect his career and get another contract out of it, most likely on another team. He's still going to achieve that. But this is not a huge blow to the team. He wasn't the glue guy that made everything work. He's the guy who broke plays, didn't pass the ball to a PG, hogged the ball on fast breaks, and took a lot of bad shots. He did have that ONE block on LeBron James in the Miami game -- but people forget that in that same game his man SCORED ON HIM 8 out of 15 times. And he shot like 11% in that game.

But people are allowed to remember things in the way that makes them most happy. This season he was averaging near career lows per 36 mins, and his advanced stats were deplorable. He wasn't a team player, or held some esoteric wisdom that made him a better player. He had the second worst AST% of his career this year. We couldn't even move him at the deadline despite showcasing him for months.

If you watched him play, he played poorly. If you look at the stats, he played poorly. The only place where he seems to have been a success is in the hearts of our front office, and in the words of the state-sponsored media they control.

And he played 959 minutes this year. He's not in our future. He wasn't playing well. And he took minutes away from guys who were both playing well and part of our future. This was like sitting guys like Brewer and CJ for Derek Fisher again. A one and done who we only ended up renting. Glad to know we love to make the same mistakes over and over again. At least 300 of those wing minutes should have gone to Alec "The Leper" Burks. Instead, he's 300 real, never recoverable, actual NBA minutes behind where he actually SHOULD be this year.

But hey, he was "cheap" (cost nearly as much as Gordon Hayward, and more than guys like Earl Watson), he was a vet (who never passed to played team ball, even fundamental things like passing on fast breaks), and he had the right attitude (at least he never swore at our head coach?).

Thank you Josh Howard for your invaluable service to the Utah Jazz this season. We hope you get well as soon as possible (and you will, this isn't a big injured), and wish you all the best for the rest of your NBA career.