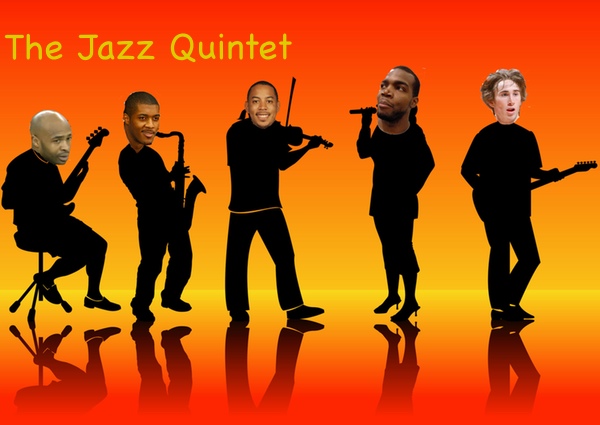 We played around with a format for the recaps, and in the end the original Jazz Quintet idea was the most popular. They certainly got the most comments, so this is what I'm planning on doing. Which is fine, since they take WAY less time than all those video analyses.

Before I start into the recap, here's an explanation for the Jazz Quintet:

In a small Jazz band like this, you usually have two headliners, and then the more anonymous background players. In this case the headliners are the singer and the fiddler. The background are the bass, guitar, and sax. It's a fun way to look at a game, because you get to highlight both the guys who were the Main Dudes (Millsap and Devin in this case), and the guys with lesser stats, but whose work held the team and game together.

It's a way to give some credit to the glue guys—the rhythm section who nobody knows by name, but keep the band together for the gig.

So, with that explained ... on to the recap and quintet ... after the jump!

A Review of the Gig:

What can I say? Four wins in a row. Lakers and Thunder going down in back-to-back games. The Jazz actually looking like they have a shot at the playoffs.

The key, to me, is this: they've stopped pretending to be something they're not, and they've played like they accept who they are.

They're not a team built around a superstar. They have nobody who can carry the team on his back. Despite the early company line to the contrary, the vets were not going to make this a playoff team on their own. Nobody should have ever began the play the vets and win vs. play the kids and tank debate. Because that didn't really fit this team.

The Jazz have gone back to some basics: Solid team defense—balanced attack on offense—depth, including playing the kids some major minutes in major roles. There is one play that shows perfectly what our team can be if it capitalizes its unique mix of good-but-not-superstar vets and oozing-with-potential-but-inexperienced kids:

Yes, ladies and gents, the Jazz ran actual plays with passes, cuts, screens, and spot-ups in crunch time. And they won. But the most important thing is this. Look at that pass again. Notice specifically where Ibaka is compared to Millsap when Hayward throws the pass, and then where Ibaka is when the pass reaches Millsap. 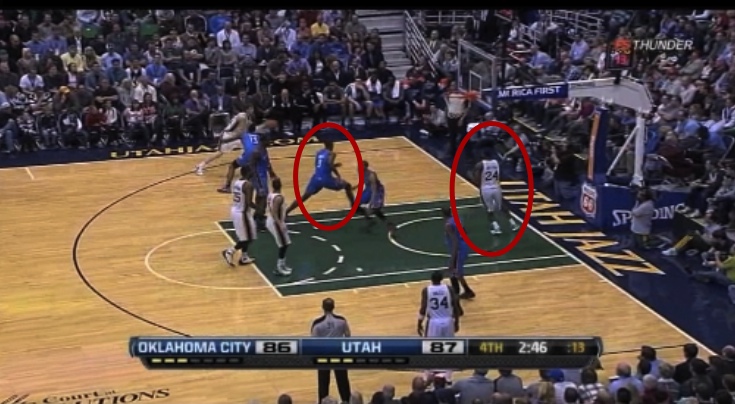 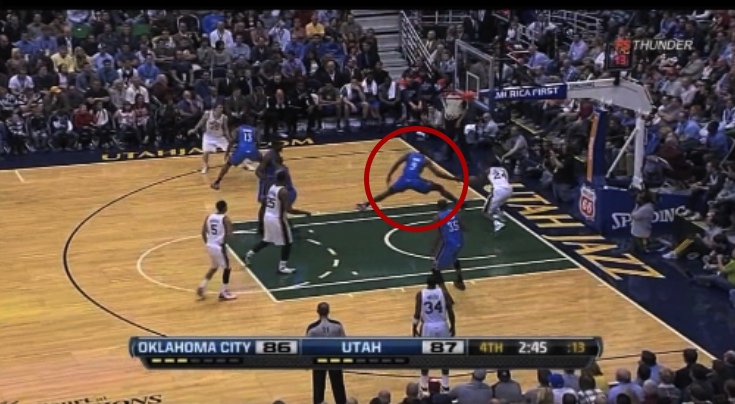 There are exactly two guys on the team who could make that pass without turning it over: Hayward and Burks.

There is also exactly one guy who could catch that pass without muffing it up, and then dunking before any defenders can react: Millsap.

No, the winning streak and the win last night are not about kids vs. vets, tanking vs. competing, or anything else. They were about playing the right guys and actually using their talents correctly.

* I know the singer silhouette in the pic is female. I'm sorry if it offends. It was by far my favorite legally available Jazz Quintet pic I could find. But that's okay. The greatest Jazz singer of all time was a woman—Ella Fitzgerald. So that's just how it is.

Millsap was the Mansap. He shot a great percentage, he scored 20 points to go with 5 rebounds, 2 assists, and a block. He hit the clutch shots. He gave one of the best defensive PF's in the league (Ibaka) fits.

The Fiddler, the number two, the guy whose improv ditties were almost worth admission by itself ... Devin Harris

15 points, and 4 assists (tied for team high with Big Al). But that's not why he's here. He's here for the three 3's in the 3rd. I'm not sure I want him taking shots like that again. I'm sure I didn't like the way they inspired CJ to say "Hey, I can chuck up wild jumpers too." I'm also sure that those shots were HUGE, and the Jazz probably wouldn't have won without them.

The Sax, the Guitar, and the Bass ... Derrick Favors, Gordon Hayward, and Jamaal Tinsley

Favors for anchoring the defense. He's not going to get huge minutes when both Al and Millsap are here. He's not going to be the offensive force when they're playing either. But twice Favors came in for ten minute stretches, and twice his defense stopped Thunder rolls.

Hayward for Durant's 6-22 shooting. It wasn't a case of missing good shots—Durant could get nothing with Hayward smothering him. Add in the two clutch assists and the F-you block at the end, and you have a great night for the rhythm guitar.

Tinsley for the street-ball fun. Seriously, passing to yourself through the defender's legs? That was awesome.