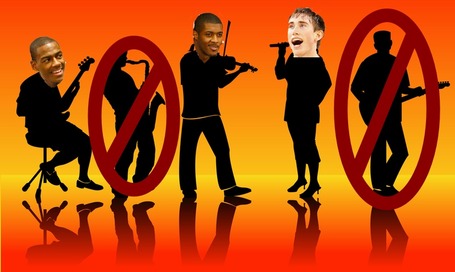 I'm going to get some flak for this, but that's okay.

There are some things that really annoy me. One is obsession with scoring lotsa points, as if the leading scorer had the best and most notable performance. This isn't helped by how news agencies recap games. It also isn't helped by Basketball Drivel you see in sites like DIME or SLAM. Actual quote from DIME:

If you [like] DeMarcus you have to like what he did tonight. Twenty-two points, 18 boards (10 offensive) for the big fella, but still a loss for Sacramento to Utah.

Aside from mention of Tinsley's inbounds pass off his defender's backside, that's the entire recap of the game. They don't even mention that DMC was 9-28 (31%) and a freaking idiot the entire game.

Or we can look at ESPN: 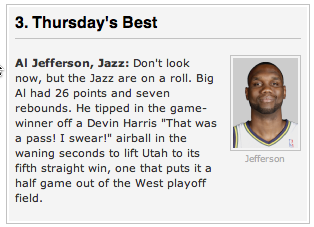 You read this stuff and think a) Al single-handedly led the team to victory and b) obviously nobody else showed up because Cousins and Thompson almost led the Kings to victory (the only other Jazzman mentioned pretends his airball was a pass).

More after the jump.

Well, I don't suppose it matters much. The big media will continue to write as they do, and casual fans will see things through those big-scorer-tinted sunglasses. And everyone who comes here has more than casual interest—we obsess about the team, and we know what happened in the game. We don't look to ESPN to explain what happened.

But I'm not going to be part of this. This is my recap. And my favorite players—barely mentioned anywhere—saved the team's butt last night. And some of my least favorite players—including the apparent best dude in the entire NBA last night—were part of the problem that almost blew the game.

We all know I'm biased. I've tried to keep it off the site as much as possible, because I know it gets old and I know everyone doesn't share it.

But not today. Sorry.

Al Jefferson did not have a bad game. 26 points, shooting 13-19. And he had four blocks. By halftime I was expecting to give him the high heels in this recap. And though he was better in the first half than the second, those first half points count just as much.

Nor did Millsap and Devin have terrible games, 14 points and 6 assists for Devin, 10 points, 7 rebounds, and a block for Paul. They combined to shoot 10-19. If I wasn't so biased, Al and one of these two guys should have made the Quintet. Possibly both (since Burks didn't exactly set the world on fire with his shooting last night).

Sure, those three straight post iso's for Millsap ended dreadfully. But they also have been dreadful when called for Al most of this season. That's not on Sap. Nor does it mean he can't be a primary scorer (remember the Thunder game?). It means Ty needs to stop calling for post iso's as his crunch-time play.

These guys also don't deserve all the blame for the Kings' run in the fourth quarter. The Kings began their comeback when the Jazz had Favors, Kanter, our DMC, Burks, and Tinsley on the court. This crew really struggled to score in the fourth.

And now for the bad

But it was the fourth quarter that got the starters kicked out of the Quintet. Terrible defense. Atrocious rebounding. Equally bad offense. They did nothing. Hayward was, at various times, guarding Marcus Thornton, Tyreke, and Cousins—because he was the only one playing defense. While everybody clanked jumpers (including one from Hayward—I'm not going to pretend it didn't happen), Hayward drove inside and drew fouls. Hayward was fighting for every rebound while Sap and Al stood and watched.

Seriously, watch the Gif of Cousins running into the pole—but this time notice Al and Millsap "boxing" out. You can excuse it for that one shot, because it was an airball going out of bounds, but that was how they "fought" for rebounds almost the entire 4th quarter. 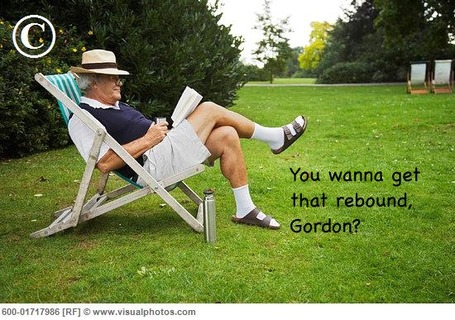 Sorry, when this is your 4th quarter rebounding (and defensive) philosophy, you get kicked out of the Quintet. That's just how it is.

He owned the 4th quarter. He saved the team. Fearless defense (playing 1-on-5 D most of the time), getting to the line, fighting for every rebound, another beautiful fast-break block.

I don't care what anyone else says—this dude was the MVP of the game. And considering who the national media all called the player of the night—I suppose this means Hayward was the best player in the entire NBA last night.

Thank Zeus for the Precious.

Dominated defensively, dominated the boards (10 in 22 minutes), dominated offensively (12 points—including a breathtaking hook shot). In a game that the other bigs couldn't rebound and couldn't defend the post, we needed every second of Favors' game. And we could have used about 12 more minutes of it, honestly.

We only had a bass guitar in crunch-time last night. Everyone else abandoned the gig. But Burks still fought for rebounds, made the clutch shot (CJ, notice it was a layup, not a fallaway three). He didn't have a great shooting night (3-10), but still came through.

That was a brilliant play drawn up by Ty Corbin to give the Jazz the win. The more I read around the web, the more I believe it wasn't a Devin airball, but an intentional lob pass after deliberately drawing defenders away from the paint.

Actual plays with screens and passes and cuts and stuff beat post iso's every time.

More of these, please.