Share All sharing options for: You Can't Have It Both Ways - The Downbeat - #713

If you are reading this blog, chances are you saw the disappointing Jazz loss in a meager 4 overtimes last night. And if you saw that game, chances are, you have already taken to twitter to voice your displeasure with Tyrone Corbin. Was it crazy how all of the starters played over 50 minutes, including at least 12 straight minutes after regulation? Yes. Was it justifiable? Maybe so. I'll let you all in on a little secret. Tyrone Corbin isn't going to turn to Derrick Favors, or Alec Burks, or Enes Kanter, unless he is forced to. He's proven that time and time again, and it doesn't look like that is ever going to change. It is frustrating and I believe it is a huge mistake to give the minutes he is giving to Derrick Favors and Alec Burks. But if you are surprised and upset whenever Tyrone Corbin shows his hand, get used to it. He will do it again. Maybe even tomorrow. At least he's consistent.

I do believe that Ty Corbin's decision was justifiable. He feels like we need to win every game and if you look at the standings, he is right. And he went with the guys he believed could win it for him. And they almost did. If it wasn't for misses on good looks from both Paul Millsap and Al Jefferson, or one missed free throw by Devin Harris, or a missed putback layup by CJ Miles, or one key blown defensive assignment from both Paul Millsap and Al Jefferson, the Jazz win. Now after 2 overtimes? Then you probably need to think about subbing. Because when does any guy play longer than a full quarter in a row on this team? I don't think a Jazz man has ever played longer than a 10 minute stretch this season. Correct me if I am wrong.

It sucks that the Jazz lost last night, but what may be even worse, is the effect those minutes will have on the team in the future. Last night was the first 4 overtime game since 1997 and only the 9th of all time. Let's take a look at the boxscore from 1997.

Brian Grant was fairly dominant for like 2 seasons in the NBA. Secondly, we now know what prematurely ended Arvydas Sabonis' career. It was this game. You should never play that guy 50 minutes in one night. He only played 24 minutes the next game, though. Also, none of those players that played 45 minutes or more, played more than 33 minutes the next game. And nobody except for Kevin Johnson, shot over 50% the next game either. Almost all of them played poorly. Also, both Portland and Phoenix made the playoffs, but lost in 4 games in the first round of the playoffs. Not directly correlated, but who knows how long it took those teams to recover?

The worry is that last night's loss leads to more losses. It will be very interesting to see how the Jazz play against the Nets tonight and if Ty cuts the starters' minutes. If the Jazz go on to win tonight and on Wednesday against Boston, last night becomes a distant memory. If we win one of the next two, we are probably equal as well, but if we lose to both New Jersey and Boston... 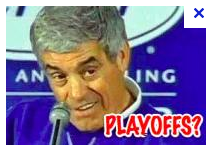 File this developing story under "things I didn't expect to happen."

Understandable. It's normal for Raja to feel uncomfortable about his role and...wait, this is Earl talking?

Earl Watson is clearly one of the most positive and "team" oriented guys on the Jazz, so it is really surprising to hear comments like this from him. The Jazz are in the middle of a 6 game win streak (when these comments were made) and back in the playoffs and Earl Watson is openly complaining about his role and playing time and his desire to possibly play with a different team.

I don't think any big deal will come of this, but it highlights something that bothers me about sports fans. We hate this kind of stuff. Admit it, you were mad at Earl for expressing these feelings. If you are, ask yourself, if you have ever wanted the Jazz to play harder in a game. As fans we are so good at demanding more effort and emotion and investment in the team, but when that spills over into desire and competition for playing time, we are offended and pissed. We can't have it both ways. It is completely normal for Earl Watson to be super displeased with the situation. It is the same fire that makes him a great addition to the team.

But fans can't have it both ways. Either you get the player that is feisty and competitive and wants to play and start and finish games, or you can have the player who just appreciates their chance, but doesn't seem fully invested in the team or in giving a best effort. Not both ways.

Right now the young guys are the right mix of both, quiet, professional and grateful for their chances, while playing hard when they get the chance. But that will change. They are bright eyed and bushy tailed and when they've been in the league a few years, they will drift to one side of the spectrum.

At the same time, the right move right now is to cut minutes from either Al or Paul or both and give them to Derrick, but you will also have to live with the repercussions of making that type of move. If Earl can sour, anybody can. But at the same time, you can't just make the young guys sacrifice, or else they will have cause to be dissatisfied eventually and you need to make them happy. They aren't guaranteed to be here long term and we need them to want to be. Maybe now we can see why the playing time conundrum is such a big deal. And also why the Jazz need to make a trade sooner than later. Because keeping every deserving player happy is damn near impossible, even though as fans, we expect it from our favorite players. I think Earl's comments prove that. Come on guys. Play with your whole hearts and guts and give us everything, but don't want anything for yourselves. You can't have it both ways.

And the saddest part of last night:

I'm not saying that Ty should feel pressure to play anybody who visits their hometown, but it is just really sad. Derrick Favors deserves more minutes than he is getting and he played well last night (and the previous 10 games), and still only saw 19 minutes in a 68 minute game. That's sad. If you felt that Derrick deserved more minutes and quietly, or loudly, begged Tyrone to put him in, imagine how Derrick's 80 family members and friends felt.

When the Jazz traded Adrian Dantley away, Frank Layden turned to Karl Malone and said "you are our guy." I am wondering if the Jazz will ever be smart enough to show Derrick Favors the same courtesy.