ESPN published a 5-on-5 roundtable discussion which Five deals should happen by this Month’s Trade Deadline. I’m really not much for rumor or conjecture – in fact I think in all fairness to our current players we owe it to them to NOT make any trades this trade deadline. However, I just had to look at one of these proposed trades – because I strongly disagree with it. DJ Foster, of the TrueHoop Network ClipperBlog, felt like the trade the Golden State Warriors should make is to trade Monta Ellis to the Utah Jazz for Al Jefferson. 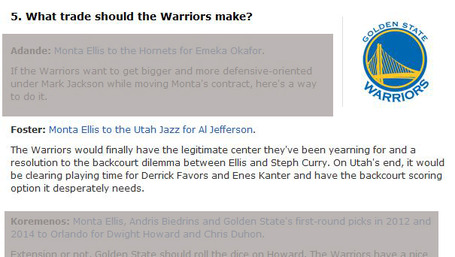 I’m not part of the TrueHoop Network, nor am I ever asked to participate in ESPN stuff anymore (since that one night a long while ago where I was involved in the Daily Dime Live Chat and things got a little crazy – no, don’t look in the archives for it). I don’t hold any specific ill-will to the good bloggers out there. I do hold ill will for this potential trade. And I do so on a number of levels. To see just how much of a crazy person I am, click on for the rest of this post.

What’s wrong with this trade idea?

On paper everything that Foster says is absolutely true. Moving Al Jefferson would help the Warriors, and at the same time, it would kind of hasten the development of Derrick Favors and Enes Kanter. After all, isn’t this kind of what I am always seeming to be upset about? Well, I’m not a fan of jettisoning Jefferson at this stage. He’s irreplaceable for our team right now, and for our offense. Moving him, even if it didn’t change any other dynamic on the team, means we’re going to be even more pathetic at the end of games when we don’t even have him to work through.

The second part is adding Monta Ellis. He’s a fantastic offensive talent, and an absolute blur in the open court. He loves to shoot, and hasn’t met a shot he hasn’t already taken before – with 17 seconds left on the shot clock. He does a lot of great things; and true, he would fill the void of giving us a backcourt scoring option. He’s a more overt, unashamed Devin Harris. A guy who should be a PG, but wants to run up and down the court and score in transition.

I just wouldn’t expect him to be the right pairing for slowing things down and helping our youth (the guys this trade clearly tries to favor) actually be legit bigmen. How good would Karl Malone have been if the ball was always in the hands of Monta Ellis, a guy who shoots it 20 times a game, and shoots 42.9 fg% and 29.0 3pt%? Exactly.

He’s just not a Jazz player and doesn’t seem to fit in with our playbook. Yes, the removal of Jefferson would mean we have to change most of the playbook. Also, it would force us to increase the pace a bit more – which wouldn’t be terrible. Harris/Ellis is nice on paper. But we were never trying to be that type of team.

Money-wise this deal has the potential to save the Jazz some money, provided Ellis opts out early. And he’d only do that if he felt like he could command an even HIGHER salary. For him to do that it would mean he would completely dominate the ball and shoot so much more. Devin Harris has made sacrifices to his game to play within the Jazz team concept. Do you think Monta Ellis would do that on a lottery bound Jazz team – a team that he would probably feel like he was the most talented guy on? I do not.

Also, say goodbye to any playing time for Gordon Hayward and Alec Burks at the 2 . . . Ellis has played 41.4 mpg, 40.3 mpg, and 37.2 mpg in his last three seasons. Don’t even pretend that he could run our offense as the Point Guard.

While this helps the Warriors so much, I wouldn’t touch this deal unless we were getting something better for our team back then just Monta Ellis.