DeMarcus Cousins offers to solve problems, we should send him to work on the Human Genome Project

Tonight the Utah Jazz will host the Sacramento Kings for the second time this year, and will play them for the fourth (and thankfully last) time this season. Sacramento has been a thorn in our side for years, despite being in the post-C-Webb/Vlade era. The main reason for this was always Tyreke Evans who used to use and abuse our defenders on his way to some of his best games ever. For his career there is no team that he scores more points per game against (22.9 ppg), or shoots better against (51.1 fg%). Or goes to the line against more (8.3 FTA / game). You get the picture. He also brings 6 assists and 4 rebounds to the table against the Jazz. If Tyreke has been the catalyst the nemesis has been DeMarcus Cousins.

Cousins is a big body who used to be neutralized by our even bigger body in Kyrylo Fesenko, but Fesenko is in Indiana right now and can't help us. Against Fes, Cousins scored only 41.7 fg% and didn't really get it going on. This season Cousins is averaging 19.3 ppg and 15.0 rpg against the "smaller" Jazz. You don't have to believe me, just check out what StatsCube has to say: 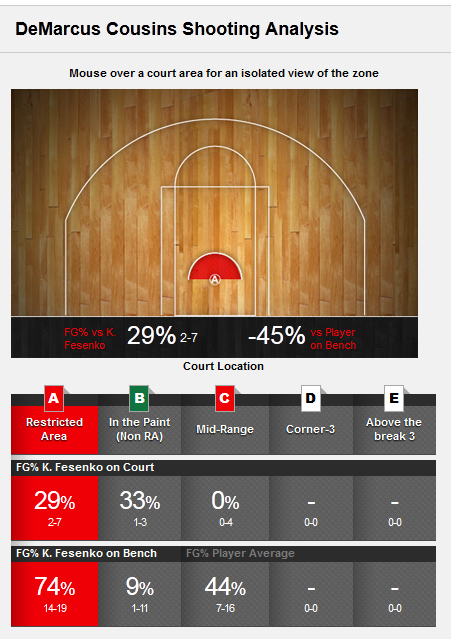 Wow, letting a guy shoot 29% is better than letting him shoot 74% right? Anyway, Fesenko isn't even on the team so this is just me nakedly exposing my personal opinion here. You can't teach size. Which is good, because it doesn't seem like Cousins or Fesenko can really be taught much.

After the jump -- what's going on with The Kings and The Jazz!

What's going on with the Kings?

The Kings are second to last place in the Western Conference, but they are still within striking distance for Golden State. The Kings needs to still keep losing. However, it's not like they are just rolling over and letting teams kill them. They had a three game winning streak a while back against the Boston Celtics, Minnesota Timberwolves, and Memphis Grizzlies -- all teams that want in on the playoffs. However, since then they've dropped four in a row. It should be noted that those losses were a 1 pt loss at home to the Jazz, a 3 point loss to Golden State on the road, an Overtime loss to Houston on the road, and a 5 point loss against the second best team in the Western Conference: the Spurs.

As much as we want the Kings to lose and the Jazz to win, this game isn't a gimmie. The Kings have been a handful this season, and only seem to be getting better as the season progresses. We have been lucky to play them whenever they've been missing a guy. We dodged a bullet earlier when we played them without Marcus Thornton. Then again when they were without Francisco Garcia. Tonight we probably will not see John Salmons.

For the season they are #7 in points per game (98.3), and DEAD LAST in opponents points per game (103.8). They were pretty much the same last time we played though, and we barely beat them. The Kings are tough for us because they have Tyreke and DeMarcus. But They are also good because of speed demon Isaiah Thomas (who some Kings fans think should get some votes for ROY), their stable of reliable three point shooters (Jimmer Fredette, Francisco Garcia, John Salmons, etc), and all-around under the radar talent in Marcus Thornton. The Kings are tough for the Jazz. I'm glad our GM asked the NBA to make us play them an extra time this year.

What's going on with the Jazz?

Okay, we're not so hot on the road. I think we've figured that out. Home is where the heart is. Tonight's game is at home. Against a bad road team. We should be fine. Right? Right. Okay, good.

The Jazz need to get Devin Harris to get back on track, we're only going to go as far as he can drive us. Big Al will do his think, and Millsap will get his 16 and 8. Gordon Hayward will wow us. But it's really up to Harris -- especially since our PGs off the bench seem to be causing each other trouble.

Or you know, unleash Enes Kanter to knock DeMarcus Cousins into May. When you play at home you gotta have a dog in you, to let the other guys know that this is your house. Big Al is too much of a finesse guy to seem to be capable of laying down the law like that. I would like the Jazz to have a guy who could do that. Do you think we have one on the team?

Kings are a tough match-up for us, but the game is at home. Hopefully C.J. Miles gets hot -- when he makes his jumpers things seem to go easier for us. (When was the last time we shot well and we lost?)