Share All sharing options for: Scary Mall Trips - The Downbeat - # 701

Great game last night from several of our bigs: Al, Sap, and Favors simply dominated inside. They scored 61 combined points, shot 25-46 from the field (54%), and 21 rebounds.

But to me the greatest thing is the team's assists. I'm not talking about 23 assists total (a decent, but hardly earth-shattering total). I'm talking about the distribution: 2 from Millsap, 5 from Big Al (12 in the past two games!), 3 from Raja, 4 from Devin, 5 from Earl, and 4 from Hayward.

That is what happens when the flex is working right: when the screens and cuts happen, when everyone works to help everyone get good shots. It's not just that there are assists, but it's that everyone is contributing them.

I believe with every ounce of belief I have that if this team is going to be successful, they have to play this way: helping each other get good shots.

One concern has got to be problems closing out the fourth quarter. In the past three wins (Miami, Cleveland, and Charlotte) the Jazz allowed the opponents to make a run in the fourth quarter. Some like to blame the vets. Others blame kids. The truth is everyone is involved with letting teams come back. Here's the game flow (from popcornmachine.net) from last night. You can see that after the 20 point lead, there is a consistent pattern: Charlotte makes a small run to cut the lead, the Jazz build it up again (but not as big), then Charlotte cuts the lead more, then the Jazz build it back up, but again not as big. Each high point is less than the previous one, and each low point is also lower than the previous one.

It's an overall downward slope regardless of who is in:

Edit: I'm looking at this chart now, and I realized that in my haste to get the DB off before I headed to school, I posted a chart that probably makes no sense whatsoever to anyone who hasn't seen popcorn machine before. Mostly because I accidentally cut off the players' names.

So, here's what it means: Each horizontal bar represents a player. Dark Blue is when he is in, light blue is when he's on the bench. The numbers tell stats of that player in the given time in. I think it's points and rebounds, but they aren't actually important to what this DB is about.

The starters are the bottom five (all of whom started in the 3rd quarter). The higher ones are subs.

The second to bottom bar, 100% dark blue and broken into periods, is the net +/- for the time a particular lineup is in. Every time there is a substitution a new period starts.

The very bottom blue bars show significant runs. You can see there were two the Jazz had during the second half.

Finally, the line chart at the very bottom shows the flow of the point spread. The higher it gets, the larger the Jazz lead. The top line is Jazz up by 20. The bottom line shown (actually the middle line, but I cut off some of the chart in my haste) is a tie score. So the line moving up and down shows the size of the Jazz lead. And that's what I wanted to point out. Comparing the line graph to the bars above showing which players are in, there is an overall downward slope from that high of a 20 point lead. That overall downward slope happens from the end of the third quarter to the end of the game regardless of who is playing. Sure, there are little fluctuations up and down, but the overall slope is negative regardless of who is in. 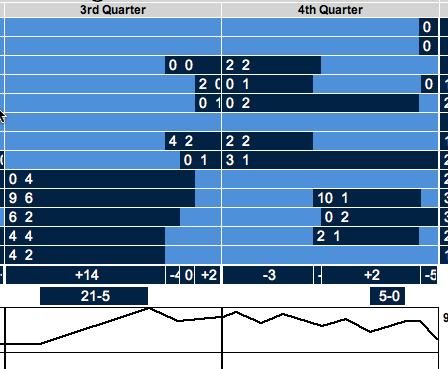 I have theories about this. For the bench players (made up of mostly the kids) I think it's an experience issue: still learning to react right and make big plays when the pressure is on. For the vets, I think Henry Abbott really explains it perfectly in this article "Hero Ball."

Anyway, I think the next two games (at Philly and Chicago) will be really good games to see more clearly how much the Jazz have really come out of the February Funk.

SLTrib has a great story about how some of the kids and vets on the team have become close. The best part, though, is the little stories found in the Jazz Notes blog that didn't make the actual story for the article. Here's my absolute favorite:

Jeremy took us on a walk through Sacramento that — I'll [Earl speaking] never follow him again. Me and Burks will never follow him. He said we was going to the mall. We went through this deserted ghost town. I don't know where we was going. We crossed the train tracks, went across the bridge, some more train tracks, and then realized we could've just walked straight across the street. So we followed him. You got to ask Burks. Then he took us through this tunnel, and then he said we was going to the mall. We got to the mall and there was like two people in the mall. Two people. That's not a mall. We don't know. We're still trying to figure it out. It was the most unsafe walk I've had since I was a kid. That's the last time we follow him. Never again. Cabs from this point.

I don't know why, but that story cracked me up so badly. Especially when Jeremy Evans defended himself:

Any guess about which vets the article present as having the closest relationships with the kids? Answer after the jump.

Last weekend, MIT hosted the Sloan Sports Analytics Conference (SSAC). Basically, it's a conference looking at some pretty complex and interesting statistical analysis of sports—particularly basketball. (And by stat analysis we're talking about stuff WAY beyond PER, assist rates, or other things in the "Advanced" section of Basketball-Reference). It included studies on what shot locations tend to produce offensive rebounds and what types of players best fit together on a team. Crazy interesting stuff.

But of note: there were only three NBA teams that did not send a representative to the conference. Yep. The Jazz are one of those three.

How concerned are you that the Jazz didn't send anyone?

4. Raja and Earl are the vets who seem to spend most of the time with the kids. Is anyone surprised?

5. I don't know how to adequately state how concerned I am that the Jazz didn't send a rep to SSAC. It honestly terrifies me.