Q: Ty's been kicked out. 5 seconds left and the Jazz need to score to win. Who are you going to? Jeff Hornacek: That depends on who's hot, who's rolling that game, who has the mismatch. I don't think you can ever have in your mind one guy, because the guy guarding him might be the best defender in the league. I think that's where coaches have to make that split-second decision. You have ideas of who you would like to go to, but you also have to find which player would give you the best odds to win the game. So I think you just have to read the situation and how the game's been going. (KFAN) Last possession; game on the line. Agree with Tyrone Corbin (roll with what you know) or agree with Jeff Hornacek (roll with the hot hand)?

Big Al has become a cheerful giver with the ball lately, and it's definitely cause for celebration. He's currently averaging a career-best 2.3 assists per game this season and a stunning 3.8 assists per game for the month of March (yes, it's only been four games, but still). Not only is Al setting personal bests, but he's also passing his way into the Jazz's record books: 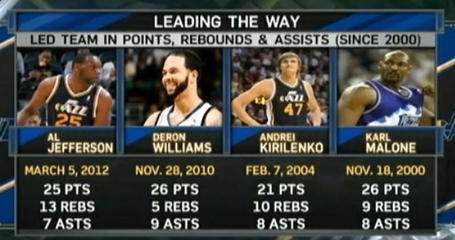 The night the CG above (which referred to the previous game at Cleveland) was shown, Al again led the team in the three stat cats with 31 points, 9 rebounds, and a co-team-high 5 assists. @chang_max asked on Twitter a few days ago whether Big Al's 7 assists at Cleveland were the most ever for a Jazz center. As he later found, Al's 7 were surpassed only by Mehmet Okur's 8 on Jan. 11, 2006 at the 76ers. Mark Eaton and Jarron Collins also collected 7 assists once each (in 1984 and 2004, respectively), while Memo had 7 on three different occasions in 2005 and 2006.

SLC Dunk's bestest BMF (big man forever), Kyrylo Fesenko, is now on Twitter under the handle @KyryloFesenko. It's not verified, but the account has been linked to his Facebook. (Incidentally, Fes' bio, "used to play for the Utah Jazz," makes me sad.) Tell me this, young grasshoppers. With Karl Malone having recently joined Twitter and now having Fes there, which individual would complete your Utah Jazz Twitter Holy Trinity? My vote goes to Jerry Sloan, along with a computer and some computer lessons.

You get glimpses now and then of how good he can be, but then you kind of scratch your head when he can't finish on some play and you say, "Gosh, where's the progress here?" But he's still a work in progress and obviously his talent and ability are going to carry him... I don't think he can really make huge steps until he starts getting 25+ minutes a game, and that's when I think you're going to see him jump. But it's tough because right now if you play him 25 minutes a game, I don't think the Jazz win as many games. That wouldn't be the best team for the Jazz. Coach Corbin's job is to win games, not to worry about hurting players' feelings.

Agree/disagree that: 1) Favors needs to get 25+ minutes to improve; 2) If the Jazz did play him that many minutes, they'd lose more games; 3) Coaching is 100% about winning games, and 0% about player management. FWIW, I took a quick look at the Jazz's record vs. Favors' minutes: The Jazz are 5-3 this season when he's played more than 25 minutes, and 9-15 when he's played less than 20 minutes. By the way, Matt Harpring is a fantastic interview. In interviews or even in the NBA TV studio when he's just being himself and just talking, he's insightful and interesting. He also revealed this during the same interview, when asked whether he was ever affected by trade rumors during his playing days:

I always had Larry. Larry would come to me and say, "I tell you what Hey, look. You're not going anywhere." So I always took that to the bank. I trusted Larry, and he would just come out and say, "Hey, just don't worry about it. I don't care if you hear trade rumors. I'm not trading you." So I was pretty secure knowing that and I appreciated Larry for telling me that because obviously it does weigh on you when you're a player. (KFAN)

Of course, we all know that Matt was in fact eventually traded (after Larry died).