Share All sharing options for: The Sexy Old Man Legs Edition - The Downbeat - #727

KJZZ/Root Sports and KFAN (wholly-owned subsidiaries of the LHM Group) have been going crazy lately with talk about how Tyrone Corbin has to be in the talks for the Coach of the Year award because of the masterful job that he has done this season. Agree/disagree?

This past week, I posted first pictures of Greg Osterag in a Speedo and next Tyrone Corbin pulling up the "leg" of his shorts. This prompted Yucca Man to ask, "When will it end?!" The answer is, not today. Here's your chance to vote in the inaugural Old Jazz Man Sexy Leg(s) Competition: 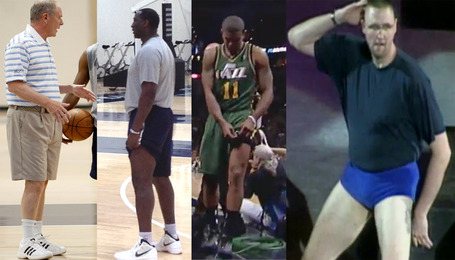 A: Kevin O'Connor
B: Tyrone Corbin
C: Earl Watson
D: Greg Ostertag (Disclaimer: SLC Dunk will not be offering compensation for lost vision and eyes that choose to no longer see.)

This season, nba.com has been the home of Jazz highlight videos where Gordon Hayward is referred to as "Haywood" and "rookie," and where highlights of his blocks are laughed off as "the first and last block of his career." Nothing new or illuminating here, but it's still nice to see our boy getting some pub on the NBA's official site. Watch the video below. Oh wait. The NBA still doesn't allow its videos to be embedded. Click here.

Phil Johnson's assessments of the young guys (via Locked on Jazz):

Gordon Hayward: I thought he got off to a really poor start. He did not play well early in the year. He had a couple of [good] games, but overall he was not able to hit his shot; he just was not playing with any confidence at all. Just before the All-Star break...first of all, he's started to rebound. I've been saying that about him for two years, that's part of his game that he can control, and once he gets some rebounds, that's helped the rest of his game. Plus I think he's become a really, really good defender. He is so underestimated. Fans don't realize how he can stay in front of people, and he's good at reading what's going on. He's a smart kid, and he's a smart player. And he has vision. I think that one of the biggest things that is overlooked in players is vision, and it's both offensively and defensively. He has that attribute. He can really see the floor. It's evident by how he can pass the basketball and makes plays, and also how he plays defense.

Enes Kanter: I think it's evident how inexperienced he's been, how far he has to go. I think the biggest thing he has going for him is he's tough. He thinks he belongs, and he can rebound the basketball, and he's got good hands. In addition, I think his shooting stroke looks pretty good, his free throws. So I think he's going to be a decent 15-foot jump shooter and maybe even beyond that eventually. The part that really concerns me is his vision, if he can see what's going on. He is so inexperienced and so afraid to make a mistake, that he does not see what is going on, at least offensively. Defensively, not too bad.

Eldrique Burkina Faso: I think he's got a tremendous future. I think that he is very confident. As long as that confidence doesn't turn into cockiness that hurts how he accepts coaching. I think he's confident and I think he's a good kid that way. He has good talent, he has the ability to take it to the basket. I think he can see the floor a little better, look for people a little more than just himself. Overall, I think he has a really bright future. His shooting stroke will get better. He's going to be, I think, a good 3-point shooter. And I think defensively, he's getting worn out right now defensively. Guys are taking advantage of him. So he has to learn the characteristics of different players, and he has the skill to do it. But he's finding out that there are guys he's never heard of, and all of a sudden he goes out there to play them, and oh my goodness, this guy's pretty good...once they learn to respect and learn their opponents, and he'll get better at that...so I see a bright future for both of them.

Phil also had this very interesting quote about Gordon (H/T modernagejazz for pointing this out):

Everyone was discounting him. We had some guys, actually some players that were here when we drafted him, that are now gone, that didn't think he was going to be a real good player.

It's like our very own game of Clue/breakfast mystery theater. Guys that were here last year that are no longer on the roster: Andrei Kirilenko, Mehmet Okur, Francisco Elson, Kyrylo Fesenko, Ronnie Price, Kyle Weaver, Marcus Cousin, and Deron Williams.