Share All sharing options for: Allow Me to Toot My Sad Trombone- The Downbeat - #718

I'm going to go out on a limb and say that this last weekend was probably the worst weekend for the Jazz on the whole season. Hardly anything went right. Not only did the Jazz lose both of their games, but pretty much every other team did what the Jazz didn't want them to do. The Kings win gets them closer to passing the Warriors, which is bad for the Jazz. The Clippers beat the Blazers, the Mavs beat the Magic, the Rockets and Nuggets won (twice for Denver), the Grizzlies beat the Bucks and the Warriors tanked away a gimme. It was an epically horrible weekend for the Utah Jazz.

So Derrick Favors gets the chance to start, due to Al Jefferson attending his grandma's funeral and he puts up 35points, 27 rebounds, 6 assists, 12-23 from the field and 11-14 from the line in 63 total minutes. Fourteen free throws on only 23 field goal attempts is really really good. Since those two games, Favors has played 169 minutes in 8 games and put up only 66 points, grabbed 62 rebounds, dished out 6 assists, gone 21-56 from the field, and 24-35 from the line. Only his free throw attempts per shot attempt has held up. Every other stat is about half as productive per minute than when he started. Now some might say that this a coincidence, or that Favors is just coming back to his averages. I don't buy it. He knows he's better than the chance he's getting to show. He's frustrated. Maybe not at the Jazz, or Coach Corbin, or his teammates, but just at the situation. The situation sucks. It sucks for the Jazz and it sucks for Jazz fans and it sucks for the team's chances of making the playoffs. Corbin doesn't need to start Favors necessarily, but it's ludicrous and unforgivable for him to turn around and give Favors the same minutes and role he had before he dominated those two games.

Oh and probably most alarming is the Jazz's defensive efficiency in those two games he started compared to the 8 since: 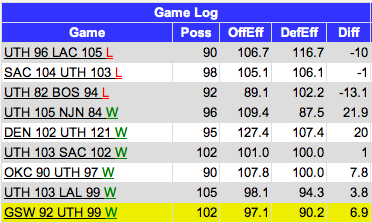 In 7 of the last 8 games, the Jazz's defensive efficiency has been greater than 100 (higher number is bad) and when Favors started, the defensive DefEff was 90.2 and 94.3. Absolutely stunning and not coincidental.

In related news, here is a prediction I am sad to be right about.

If you asked most Jazz fans what the biggest problem is with the Jazz right now, I would guess that far too many would say the fact that Earl Watson is getting Jamaal Tinsley's minutes. The thing I find funny is how much Jazz fans loved Earl Watson earlier in the year. Some wanted him to start and play over Harris for the first half of the season. Now he sucks. I do think it is fishy how Watson replaced Tinsley in the rotation immediately after throwing a fuss to the media about playing time. That sends an awful precedent and message. But Watson's playing time isn't that big of a deal. I agree with Jody Genessy, that it really isn't a huge deal compared to other issues.

Again, this is what happens when you decide to sign too many guys that deserve minutes. You have issues like this. We have the same issue with our big men that we have with our point guards. You can pretend that it gives us great depth, and we all have, but honestly, it's a mistake not to have an obvious hierarchy to your roster. A team needs defined roles. This is how I felt about it months ago. I liked the Tinsley signing, but scratched my head when he was brought in as a third stringer.

I correctly predicted that Tinsley would become as popular among Jazz fans as Watson did. Again, it's another prediction I am not happy was correct.

We have talked from time to time about the Jazz making the playoffs and losing quickly to the Oklahoma City Thunder, but I think there is a worse matchup for the Jazz and that would be the San Antonio Spurs. Manu Ginobili and Tony Parker would eat our pick and roll defense alive, they have depth at the big man positions with Splitter's improved play, the Jazz have nobody to follow Bonner out to the 3 point line, and we hardly ever win in San Antonio. Not to mention the lopsidedness of a matchup of Corbin vs. Popovich. Unfortunately, if the Jazz stumble their way into the playoffs, they are on a collision course with either the Thunder or the Spurs.

Trivia Question: What team has the Utah Jazz met most often in the playoffs and how many of those series did the Jazz win?