Share All sharing options for: Devin Harris Has Two Balls Edition - The Downbeat # 732

The Jazz didn't play last night but it sure felt like they lost. I know Houston lost (yay for playoff standings) and Detroit lost (yay for GS pick) but the Suns victory knocked us down to 9th again. The Suns and the Jazz both have 3 games left. The Suns face the Nuggets, us, then the Spurs. We obviously face the Magic, the Suns and then the Trailblazers. It looks like we have the easier road especially since all our games are at home. I am nervous though I am trying not to be, I know the Jazz control their own destiny, win out and we're in the playoffs but still... We never know with this team. I would love to think they will definitely make it, I try to be positive about things, but this is so hard. We're so so so close if we don't get in now it will be so disappointing!

This season is so eerily similar to 2004-2005 season (Deron's rookie year). Young players getting better, rough start, inconsistant play, strong finish. That season we know we did not make the playoffs, We missed by a game or two. Lets hope this year has a happy ending!

David Locke did in-depth interviews with Derrick Favors and Gordon Hayward. They are a pretty good listen. A few things that stood out the most to me while listening:

There is a ton more info so check them out. Hayward here and Favors here. Be aware Locke swears a lot in his interview with Hayward which I personally found offensive and unnecessary.

Josh Howard held a charity event last night. I haven't seen too much written on it yet. There were a few funny tweets from BTS before the event:

I can't picture Hayward not being good at something with how competitive he is. I guess a gamer, tennis player, basketball player, son of an engineer just doesn't have time for bowling.

Did any of you go to Josh's event? I know Clint (@clintonite33) went and tweeted about it some.

Jeremy Evans has his art website up. It is here. This mural is just awesome and I think Fes could stare at it for hours

The Jazz are holding a promotion for the last home game of the season. You can win 2 VIP dinners (before the game) and 2 lower bowl seats to the game Click here to enter.

My greatest Jazz promotion "win" was obviously sitting courtside with Greg Miler. A few years ago my daughter was chosen to be a Courtside Kid. It was tons of fun for her. She was able to stand on the court during warm-ups (me too since I was with her), she got to retrieve balls for the players, who were all super nice to her. The coolest part was we were able to stand in the high five line during intros. It was sooooo cool! I received high fives from every Jazz player. The best one was from Deron cause he didn't just give me a high five he held onto my hand a little afterwards.

My daughter got a picture with a player (we did not get to chose the player. The KOOF chooses you!!!!) 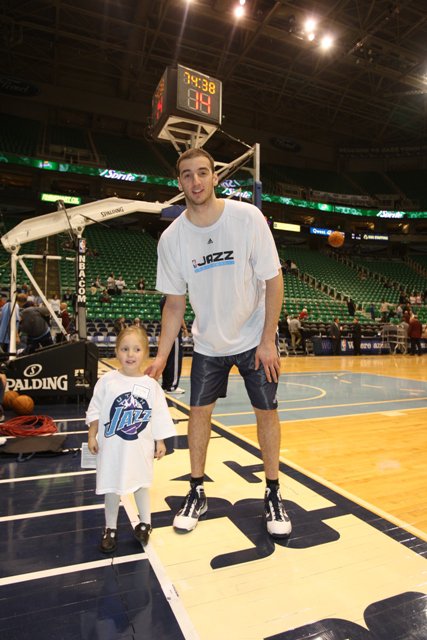 What is your favorite Jazz contest you have won?