While You Were Sleeping - April 20th

Share All sharing options for: While You Were Sleeping - April 20th

Nothing surprising happened last night, but there is some good news. The Thunder and Spurs are still fighting each other for the 1 seed and home court advantage through the Western Conference Finals. Why is this good? The Suns and Nuggets have a game remaining against the Spurs and Thunder, respectively. This means there is less of a chance of star players being rested, which could help the Jazz.

The Standings and a short WYWS, after the jump. 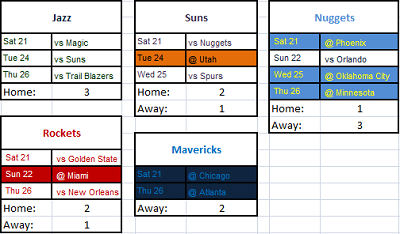