2012 Playoff Push for Our Utah Jazz

Share All sharing options for: 2012 Playoff Push for Our Utah Jazz

Three games left, we win out, we're in, that simple. I haven't found myself this excited for the playoffs since 2008. I still had hope the year following the Jazz's Western Conference Finals run. I knew we would be facing the Lakers, but that's alright at that point they hadn't crushed all of our playoff dreams. The Jazz and the Lakers had similar records since their respective Korver and Gasol trades.

We rode the Lakers hard to six games with game 5 in L.A. being the biggest disappointment due to a strong comeback that was left short due to the nice "Staple Center" calls. Following 2008 I wasn't that excited anymore. Yes we'd do our duty beating Houston, the Nuggets but what a buzz kill it was knowing we'd face the Phil Jackson lead Lakers once again. Three straight years we faced the Lakers and three straight years we got progressively worse against them.

This year I find myself having hope once more. We are not that small front court team that couldn't get past the Lakers, we are not even last years team. We are the 2012 Utah Jazz, full of youth, full of chemistry and full of hope. 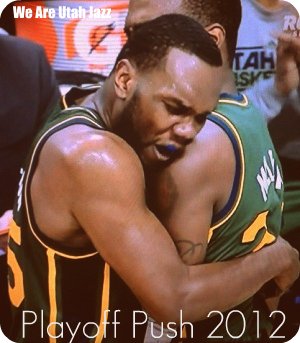 My heart sincerely desires the Jazz to finish this season strong and to make the 2012 playoffs. I know we have little chance of beating the Thunder or the Spurs, however, if we don't make the playoffs we have no chance at all.

Orlando, Phoenix and Portland. We've beaten those teams in the past and we can beat them this week, because We Are Utah Jazz.