As a smart NBA fan you know that the Utah Jazz have had some of the most stylish players, ever. We know about Karl Malone's flashy clothes for attending unbelievable functions. Tom Chambers (when he played here) used to wear the Canadian Tuxedo well past its' expiration date. And well, Greg Ostertag knew how to dress up (or down). There is a true style king of the Jazz: Mark Eaton. Some of you already know Mark Eaton. He is the 7'4, NBA fourth round pick out of UCLA who was actually discovered working as an auto mechanic. He is, clearly, a man-mountain. He once almost recorded 500 blocks in a single season. Wow

He also has an epic Beard of Destiny. 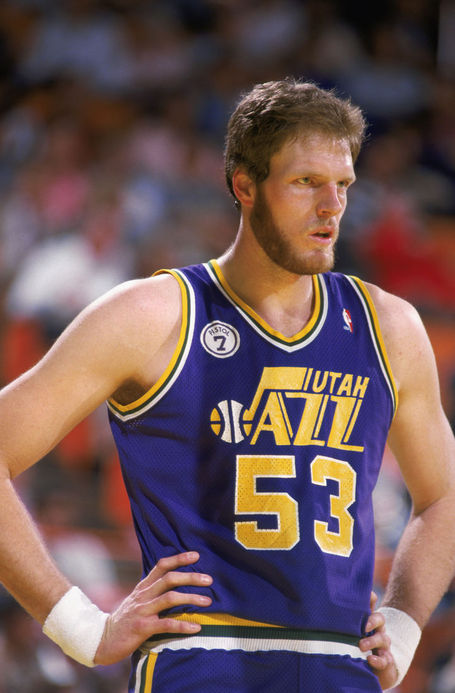 He wasn't just some wild frontiersman. He spent a long time on his signature style, and it shows. For a professional critique by Megan Ann Wilson (@SheGotGame) , and possibly my greatest work in my life, click on below!

First of all, I apologize for not having access to post these amazing pictures of him directly. Secondly, check out what he was wearing on the court! (Opens up in a new window) First of all, how do I not mention it, first of all, he's showing a lot of skin. The other two players (Terry Cartledge and Sam Vincent) are showing some skin, but not as much as Mark was. His shorts end about a foot and a half too short. (He's 7'4 remember) I guess by the same token longer game shorts for Eaton would have bankrupted the NBA. Maybe there was another reason for the criminally short shorts, though? Maybe Mark was ahead of the curve, and he knew ladies were NBA fans too? And he always gave them something to look at when they went to the game.

You know, besides the single knee pad that's the wrong color. You know that this is something you do on purpose, wear a knee pad that's not even the right color as your own team's colors. This is clearly peacocking behavior. Or in his size category, Brontosauruscocking.

Mark also was busting out the super long socks with his Adidas high tops. Nothing fancy there, but he knew that the classic Adidas look was all that he needed to compliment his game. Mark was big, white, and got the job done. Like his shoes.

I didn't want to waste MAW's talent on the on-court look. Where she really shines is looking at the off-court styles of players. (If you don't know, some of today's NBA players PAY HER to fix their looks) And when looking at Mark Eaton's off court style you have to start with his present day contemporary formal outfit. Aka. "The 80s Sitcom Blind Date" Get up. (Again, sorry I don't have the rights to this pic, and again, it opens up in a new window)

"Mark Eaton is known more for his blocking skills than his sartorial sense, but big hair and bad ties have long been an Eaton trademark. Eaton attended a 2007 NBA All-Star looking decidedly 80's inspired, perhaps a nod to his heyday. His white button up shirts is made of inferior fabric as you can see in the small, flimsy collar points.

"The tie is knotted far too small and is not flattering to his face shape, body type and accompanying jacket. Perhaps Eaton wanted to try the skinny tie trend but didn't realize he had a thick retro style around his neck instead. His one button suit jacket with low stance looks awkward paired with a tiny collar and tie knot. A two button suit with tailored mid-section is much more flattering style and befitting of a true Jazz legend."

You can tell that Megan knows what she's talking about. You can also tell that I'm absolutely frightened to ever meet her in person, because I fear how she'll appraise my clothes. ("The bags under the eyes / medical scrubs look is so last season . . . ") But back to Eaton, the only other thing I have to add is that he's trying to do a little John Lithgow thing with the hair. He's bringing that back. The removal of the beard, and trimming it into a neat goatee, was because he did not need to intimidate human beings anymore. The beard was epic. The beard had a lot of powers. But it pushed people away from him.

How could it not?

If you saw this as you were subbed out of the game would YOU want to sit next to him?

The Epic Beard of Destiny:

There are no words.

Mark Eaton's beard is amazing. It wasn't some scraggly half-attempt like so many NBA players have today. It's not the overly manicured topiary of other players today either. It was, and will always well be, the classic full beard. It was trimmed. It was not a neck beard. But combined with his stare, his 9'6 standing reach, it intimidated the heck out of people.

He was never on the cover of GQ, but I'm certain no guy on the cover of GQ would dare to drive into the paint to see him and his beard looking back at him. That, plus his basic hightop Adidas, made Mark Eaton the King of Style for the Utah Jazz.