Share All sharing options for: The Jazz Are Looking To Punch Your Imaginary Ticket to the Playoffs- The Downbeat # 734

Today, we are going to start off by talking about freebies. So push play and follow along.

I coach high school tennis here in North Carolina and if there is one thing I emphasize with my boys, it is that they can't give their opponent free points. No double faults. No unforced errors. In any sport, a team or individual can defeat themselves by giving away too many freebies. The Jazz are super duper good at it. The main reason they find themselves as the 8th worst defense in the league? They send their opponents to the free throw line way too often.

Free throws are also the reason that I fear both the Oklahoma City Thunder and the San Antonio Spurs in the playoffs. The Thunder score 20.7% of their points from free throws, 2nd in the NBA. They also have lead the NBA in free throw percentage for most of the season.

The Spurs on the other hand are a tough match up for the Jazz due to free throws as well. In their third meeting of the season, the Spurs shot a ridiculous 43 free throws against Utah. In the 3 games that San Antonio didn't send their JV team, they shot 104 free throws to the Jazz's 74. Wanna spot the Spurs 10 points a game?

If you notice, all of our young guys are some of the best at getting to the free throw line. That is going to be huge in the future. If the Jazz youngsters can continue to shoot this many free throws per field goal attempts, they are going to be living at the line more often than this current team. They will be taking advantage of their opponents giving out freebies.

If you are a Jazz Hater, or are looking to spend $5 to join a Jazz Haters Fan Club, or you just want a good laugh, check this website out. They accept Paypal. Hurry fast though. Memberships are limited. Warning: If you are sensitive about Jazz hate, don't visit the site.

If the Jazz lose tonight, you will know who to blame: 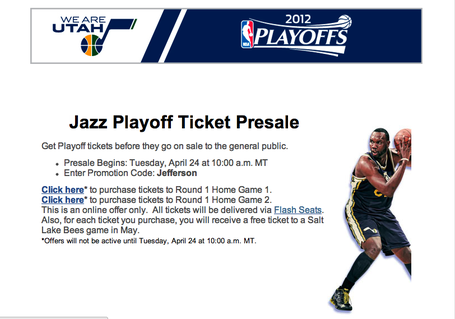 If you are newer to this site, you might not know that we have a lot of superstitious Jazz fans here. And this seems like a serious jinx that could blow up in the team's face. I mean, couldn't they wait just one day to start selling playoff tickets? I understand they are early bird tickets and the playoffs are in like 5 days, but how embarrassing would it be to purchase playoff tickets that never exist?

BREAKING UPDATE: That one fan club I told you about, has disbanded.

The Jazz haven't beaten the Suns since March 4th, 2010. The Suns have won 8 matchups in a row and 12 of the last 16. Steve Nash has bested the Jazz plenty in his career, including leading the Dallas Mavericks back from 0-2 to win a best of 5 game series against the Jazz in 2001. So this isn't the biggest game the Jazz have played against Nash, but it's up there. Be there. Be early. Be loud.