Share All sharing options for: The Utah Jazz are in a unique position to have their cake and eat it too

We have all heard the expression of having a cake, and also having the desire to eat said cake. Logically you can only have one or the other. Unless of course, you have two cakes. The Utah Jazz, this season, have a chance to have two cakes: be in the playoffs, and have a lottery pick. At the same time. 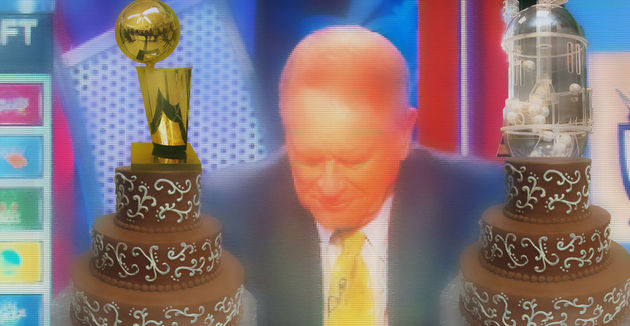 Yes, Kevin O'Connor has somehow positioned the Utah Jazz to have their cake and eat it too.

I still can't believe that the Utah Jazz made the playoffs. Yes, the Jazz had an individually up and down season, where we beat the Miami Heat, Los Angeles Lakers, Dallas Mavericks, Oklahoma City Thunder, and a bunch of other great teams -- while also losing to a lot of the teams fighting for good lotto spots right now. And yes, the Jazz had a lot of help from teams that were obstacles who self destructed down the stretch. Two stellar examples are the Minnesota Timberwolves who gave up the ghost quite soon after losing Ricky Rubio -- and they were a team that was beating us, and beating the teams we had trouble with; and the Portland Trail Blazers who blew it all up. But at the end of the day, specifically the end of yesterday, the Jazz had secured their spot in the 2012 NBA playoffs.

And frankly, when Kevin O'Connor was going on the radio saying that the Jazz were not rebuilding, and that our team was a playoffs team -- it seemed like the ramblings of a madman. The Jazz were fighting to hold onto the 10th spot in the west for much our the post All-Star break NBA season. The Jazz were losing games to bad teams. And the Jazz were playing guys who weren't helping the team win.

The playoffs really could not happen. Yet somehow they did. Pretty much in a way where KOC didn't have to make any trades to free up space (because he signed veterans who are injury prone . . . I guess that's a new one.) Hat's off to KOC who put together a team that made the West playoffs this year. Hat's off to Tyrone Corbin for also leading this team to the West playoffs. I cannot stress how unlikely this outcome was.

When Ty said "Playoff push" it seemed like a joke. It really did.

The Jazz put their mind together to get it done, and they did. And I'm equal parts amazed and proud of them. They got the playoff cake.

If the Utah Jazz did not make the playoffs they would be in the lottery. And due to deals made by KOC, if they made the playoffs they would then have to give up their pick to the Minnesota Timberwolves. Of course, the Jazz were also owed a protected lottery pick from the Golden State Warriors.That pick is still in the air right now; however, it was a zero sum game for the Jazz to either make the playoffs or secure a lottery pick in a theoretically legendary NBA draft.

Well, the GSW pick is still in play because Golden State hasn't fully tanked itself into oblivion.

I find this very interesting because it is something we Jazz fans need to keep an eye upon.

Right now (before the games tonight started) this is what the "lotto" standings stood like:

(Please note that the T-Wolves don't own this pick of theirs, but we need to look at their record)

And by my estimation I think we're going to see a little movement from this ranking. I think the Cleveland Cavaliers jump up to the #4 spot by losing their next two games; and I think that the Golden State Warriors will tie either the Toronto Raptors or New Jersey Nets for that precious 7/8 spot. (I think Toronto wins)

So these are my predictions. And it makes things very interesting for Jazz fans. We're still in play for Golden State's pick -- which I think comes down to a) a coin toss, and then b) the actual running of the lottery. From my (limited) understanding even if the "Dubs" end up with the #7 most balls in the lotto -- they can still get bumped back to #8 (or worse) giving the Jazz the pick again. And of course, there's a chance they don't win the coin toss in the first place.

So, *IF* the Warriors lose against the resting Spurs (likely) they still have to win the tie breaker against the winners of the Nets / Raptors game. That's a 50% chance right there that the Jazz get the pick. If GSW keeps their pick (due to winning the tie breaker), then the Jazz still have a 25% chance of getting their pick (due to the Warriors losing the lotto and getting a #8 or worse spot from their expected finish of #7).

In simple math that means the Jazz have 3 chances out of 8 to screw over the Warriors. Those odds don't look great; however, it's not just that it's the Golden State Warriors luck potentially screwing them over with the tie breaker and then the lottery. The other teams (spot #9, 10, 11, 12, 13, and 14) are in play here too. Only ONE of them has to "win" the lottery by getting a top three spot - thus bumping the warriors out. So what are the odds that one of those six teams can win the lottery? That's actually 32.5%. That still isn't big, and that's the collective probability. The math doesn't make it easy for the Jazz.

But where math fails there's something called history.

So that means in the last 12 NBA Draft lotteries this type of thing (where a #8, 9, 10, 11, 12, 13, or 13 seed jumps up) has happened three times. So if the Warriors go through the gauntlet and wins the #7 seed (coin flip) there is still a chance they'd lose it. If the Warriors go through the harder gauntlet and lose the coin flip -- there's still a historical presidency for being overtaken.

It's not likely, but out of all the probability numbers out there, there is a chance. And that chance is greater than 0%. And if you asked me to put a probability for how much of a chance the Utah Jazz had for making the playoffs this season I would have put it pretty close to 0%.

And in case you are just catching up, the Utah Jazz are in the playoffs this year.

Why this is crazy:

This is specifically crazy because I felt like the Jazz would end up with the worst possible outcome for this season. I felt like the Jazz would aim for the playoffs and fail. But not fail hard enough to get a good lotto pick. And that Golden State would super-tank and we'd lose their pick. Resulting in the Jazz missing the playoffs, not developing young talent, and missing out on the Warriors pick -- with nothing to show for this season but a #13 draft pick and a wasted yet.

Instead the Jazz have successfully reached the halfway point at the absolute BEST possible outcome: being in the playoffs and getting the Warriors pick. And while the Jazz are unlike to retain the Warriors pick due to Golden State not being in or around the Late 8-14, there are still chances that the Jazz get the pick.

Having our cake, and eating it too.