Top Grooming Moments in Utah Jazz Team History: Raul Lopez is every member of a boyband

Share All sharing options for: Top Grooming Moments in Utah Jazz Team History: Raul Lopez is every member of a boyband

Don't take this the wrong way, I'm sure the dudes on boy bands are talented. And don't take this the wrong way, Raul Lopez was really talented too -- he was a European PG taken by the Utah Jazz ahead of a number of other players (of probably better quality), like Tony Parker of the San Antonio Spurs. While Parker has gone on to be a multiple time All-Star and NBA Champion, Lopez has gone on from injury to injury playing in various lower level teams, and perhaps also night clubs and for the right price, boudoirs of rich widows. (Yeah, like some kind of Midnight Cowboy thing)

Effectively the Spanish Blur was a better looking player than he was actually a player who could play the game. No, Raul Lopez has no rings, no All-Stars -- but he was the MVP of a completely different league. The League of athletes who were just an autotuned voice away from being in a Boy Band. 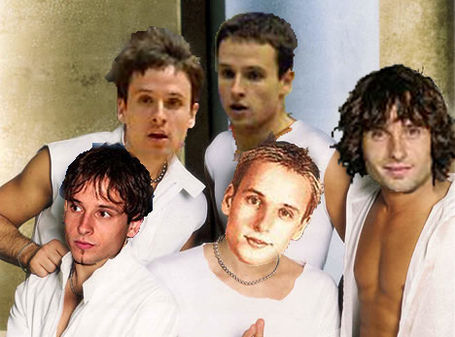 Raul wasn't a one trick pony either -- he's had many looks over the years. So many that he could be every member of a boyband, by himself. He was the cute, harmless boy next door. He was the smooth lady killer. He was the funny dumb one. He was the 'tough' one (can't you see that sliver of facial hair!) as well. And he was also the one with unnaturally blonde hair and too much product.

Raul was a five tool PG, just off the court. He was the mathematical inverse of Mark Eaton and his epic beard. But it just goes to show you that when you are looking at the Utah Jazz, you're looking at a team made up of so many different styles, looks, feels, and internet predator threat levels (I see you Olden Polynice). And mixing up all these different styles is what the Jazz is all about.