It just does not get any better than this. There really didn't even need to be a game after this. Thanks to the wonderful @da_breezman for uploading this so speedily.

More highlights from last night's game from the two stars (or at least the two guys that I loved seeing getting bonus minutes) of the game, Jeremy Evans and Enes Kanter: via the other Jazz video guru, @prodigyJF.

So up ahead we have the Spurs. Growing up, I was a Jazz fan and my sister was a Spurs fan. I had Malone and Stockton posters in my room; she had Robinson posters. In our house, Karl, John, and David needed no last names. I solicited some tidbits from her on the Spurs. Here's what she gave me: a) According to Mr. Robinson, this is the best the Spurs have looked going into the Playoffs, ever. b) Tim Duncan hasn't felt this good at this point in the season in three years. c) Pop not only rested the Big 3 in the final two games of the season; he rested himself. The four of them didn't travel with the Spurs to their last two games, which makes Mark Jackass' tank job and/or ineptitude that much more laughingstocky. I do know that's not a word. So...the last bit made me laugh; the first two made me feel, well, not that great.

Last year, we had Hickey Hayward. Open poll: This year, do we have Hickey Harris? 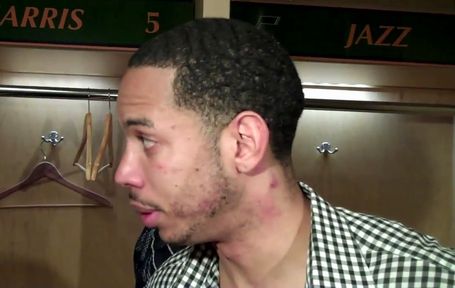