Previewing this Spurs vs. Jazz series which begins tomorrow, I was looking at both teams' Synergy stats. Synergy is the really cool video stats tool that NBA teams use, and they have a less good version for regular people like me (now $19.99!). They have a free site, though, where you can compare two teams, and see how they're likely to do against each other in each facet of the game.

They represent this with arrows. The rules for the arrows are simple:

When on offense, the picture doesn't look so bad:

(Go past the jump to see pictorial arrow penetration! #IDQM) 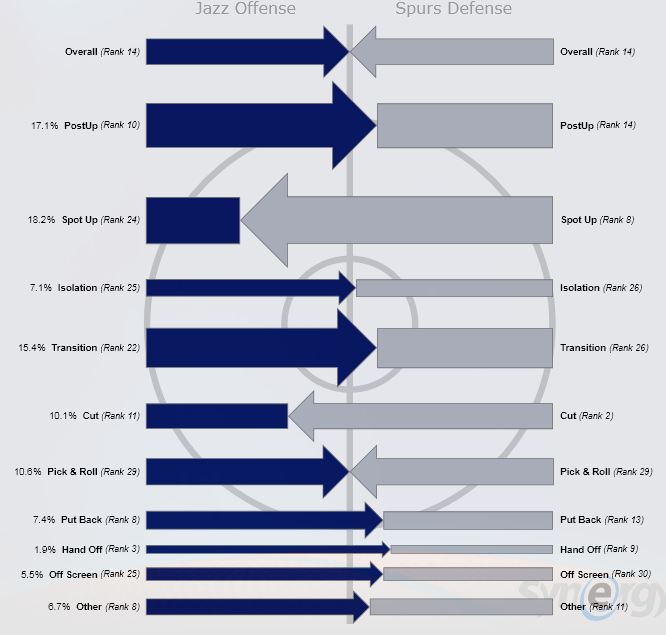 Most of the arrows are pretty even. While the Spurs have a comparative advantage in spot-up shooting and cut plays, the Jazz counter with an advantage in postups, transition plays, and putback opportunities.

On the other hand, when the Spurs have the ball... well the Spurs have a huge advantage. Frighteningly so. This chart's monochromaticness literally made me gasp.

I think the fright comes from the imagery itself. I am reminded of Lord of the Rings-esque arrows (you know, from bows and stuff), coming flying into our defensive territory. The spears are coming, they are flying at us, and will likely lead to our downfall. Tense times indeed. 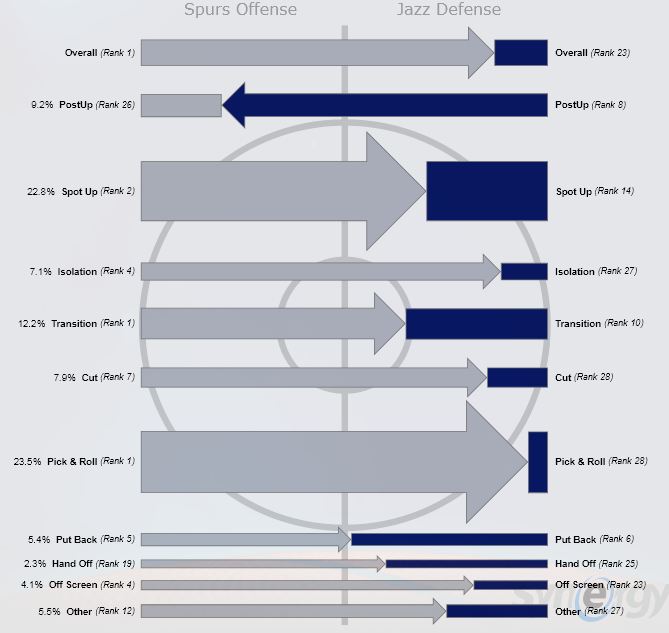 Oh! Oh! The pick and roll arrow just slayed us! While we do have an advantage on post-ups, the Spurs just don't run them that often. Instead, they run lots and lots of pick and rolls and spot up shots, which we are powerless to defend. Our fortress is in grave danger.

Given this, what is the Jazz' only hope? It may be to outscore the Spurs, and take over their lands with our offense while they mercilessly pillage our defense with their pick-and-roll. Either that, or learn how to defend, and fast.