We Are Utah Jazz- Starters in the Playoffs!

Share All sharing options for: We Are Utah Jazz- Starters in the Playoffs!

We have 51 hours until the next Jazz game. That is A LOT of time to ponder and question what happened on Sunday afternoon and the decisions that Coach Corbin made and how the players played. One of the leading discussions is whether Josh Howard deserves to start. Josh missed a good portion of the latter part of the season, yet Josh has playoff experience and has caused problems for the Spurs in the past. I posed this simple question on Twitter and got many interesting responses:

We had 24 'Noes' 3 'yeses' and about 3 'maybes or didn't watch enough of yesterday's game to have an opinion.'

[Edited by me (Amar), this is a good long post, check it out after das jump]

Here are some of the no replies: 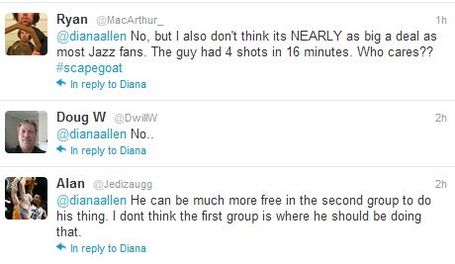 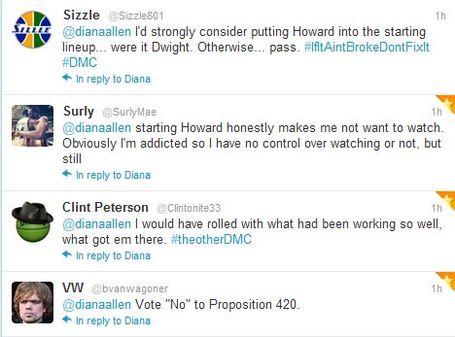 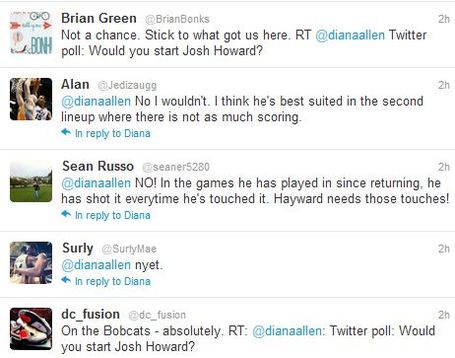 Some funny and interesting responses.

Alright now its time to look at those who want Josh to start and why:

Interesting responses also on the side of starting Josh. Jody our favorite beat writer brings in the logic. Maybe just maybe the Spurs are better than us and starting Josh doesn't really matter at all.

We do know that coach Pop is going to match any lineup we put out there, as pointed out on twitter maybe its nice to have the vets to pull out those old playoff tricks since every team is so scouted now-a-days. Maybe its nice to stick with Carroll since when he was in the starting lineup we made our #playoffpush. Maybe we start Favors and just play our 5 best players most of the time.

What do you think, start Josh or no and does it make a difference?