The Downbeat - #721: The Greater than the sum of the parts Edition

Share All sharing options for: The Downbeat - #721: The Greater than the sum of the parts Edition

Okay, so we lost a "must-win game" last night . . . and it was another buzzer beater / late tip in situation. Well, the morose part of me wants to be happy that it wasn't another four overtime loss, at least. During the stretch run of any particular season each win and each loss "appear" to mean more. That said, at the end of the year each win and each loss in the last month have the same weight as wins and losses before the All-Star break. We just ascribe greater overt value to these games because they are the only ones remaining.

This isn't a scheduling issue, it is merely a psychological issue.

When I say the games appear to mean more during a stretch run I mean it. They do appear to mean more; but we're being extra selective here. Yes, these losses look bad now, but these are -- if you excuse the term -- foundational losses. Or at least they would be if we were losing these close games with our novices on the floor. I don't know how many more foundational losses Big Al Jefferson needs to have in his career before returning to the playoffs. What these foundational losses are supposed to do is build a hunger and greater wealth of experiences for younger players to draw on, and eventually work past. A great example of this would be Kobe Bryant's "foundational losses" in Utah as a rookie. He had them, worked past them, and hasn't looked back.

Losing to the Phoenix Suns is something we can build on, of course, if we have the right people in the game for it to mean anything. The flip side of the coin is that if your vets are good enough, they win these types of games. It's a harsh world . . . the NBA.

Last night it was slim pickings though, as the largest lead was only 5 points.

Raw data from PopcornMachine here; or Full-Size with notes by me here

I just had to add up the values for the highest lead value per position on the floor and see who did it last night. This is not scientific, as it does not involve any real objective metric, or take into account their true game or season +/- minus values. However, it was interesting to me to see that -- by position -- the guys who were on the floor during our largest cumulative leads were: Jamaal Tinsley, Alec Burks, Gordon Hayward, Derrick Favors, and Al Jefferson.

Let me come out and say I don't like this lineup. Or at least, I did not like it until I actually looked at the metrics of our other lineups. Clearly there was something special about this group that needed greater investigation. On the most superficial level they were better than the group of Phoenix's starters: 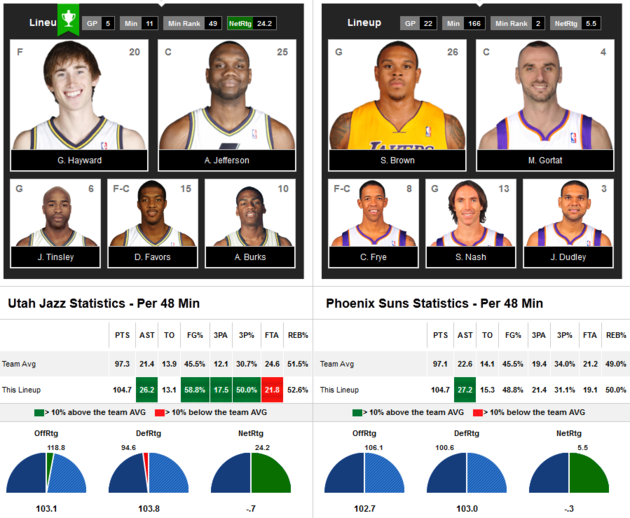 Some guys are better than others. However, just putting out a lineup of your best individual guys seems to forget that this is still a team game. And as such, team cohesion means a lot. You not only need to find those really good players, but also find the group of players that seem to possess some sort of synergy between them. For the longest time we were used to our absolute best players also being, innately, our players with the best synergy: John Stockton and Karl Malone. This is a new era of basketball, and we don't have any more Hall of Famers on the roster. This crazy mixed up lineup of Jamaal, Alec, Gordon, Derrick, and Big Al seemed just absurd to me. It was just a lark where I found them to have good impacts upon this game last night.

However, the data seems to reveal that this group doesn't suck.

Notice the team average as well.

For some reason the team of Alec, Gordon, Derrick, and Big Al seem to play way better with Jamaal than any of our other PGs. I was an abject Jamaal hater -- but besides the variable of who they were playing against (which I can't naturalize for) the experiment to see the effect one change had on this group is startling. Similarly, keeping Jamaal in there and substituting Paul in for Al seems to wreck things. Well, it's still a good group, +12.0 net Off/Def rating, 56.5 fg%, etc), but it's not a dominating group like the Jamaal, Alec, Gordon, Derrick, Al group is. (Btw, check out the floor spacing with all the threes they take and make!)

Clearly, some players do perform better with each other -- and that some lineups are greater than the sum of their parts. This is something you'd want to see Tyrone Corbin figure out during training camp (which we didn't really have), preseason (which was two games), practice (teams practiced this year), or in the first half of the season (aka. Raja Bell plays 27 mpg time). I was dismissive about this lock-out shortened season, and felt like it would just count (in the big picture) as an extended training camp.

Well, better late than never in this case... this lineup actually is only the #7 best lineup in terms of Net Off/Def Rating. I will say that if I released the full list now people would get mad -- especially DeMarre Carroll's fan club.

Of course, just because a group of guys plays together well for 11 minutes doesn't make them a world beater. And just because an end of the bench guy doesn't seem to mesh with the guys he's on the floor with (I see you DeMarre) it doesn't mean he's worthless. It would be easier to try to mix and match these line ups if we were fully committed to trying to build for next year. But our heart is set on the playoffs -- so we aren't going to see this unless something drastic happens.

Why plan for tomorrow though -- we have a hot date with the Oklahoma City Thunder or San Antonio Spurs! : )

Jokes aside even a mean old guy like me isn't afraid to learn new things -- like I just did when I looked up that Jamaal / Burks / Hayward lineup. I think it would help our team this year, this off-season, and of course, help us prepare for next season if we did more mixing and matching. It seems to yield results. We kind of already know what Devin/CJ/Gordon/Paul/Al can do. We're seeing it pretty consistently.

It sucks to lose to the Phoenix Suns . . . but at least it gives me a reason to embed this video uploaded by Adam (@prodigyJF / Memoismoney ):

Ah, this all had a very Syncopation feel to it . . . those will return this off-season. (Man, the good old days of 1 post a week)