You may or may not remember that whole Wing Position Dating game thing that we did a while back (results: everyone didn't like Howard's production, Bell's shooting wasn't enough to keep him on the floor, and when people found out that "Player C" was C.J. everyone started to hate on him). If you wanted to see the progression then you can read the posts here, here, and finally here.

I like our best players to play. I'd like our best players more if they were complete players. In the quest for a complete player you still can't count out the utility of a guy who is flat out good at what he does. The most recent example of this in Jazz land could be the case for Kyle Korver. Korver didn't hit the glass. He didn't play defense. He didn't set up other guys on the court. But he had killer range and made threes (when he wasn't too afraid to shoot, in his last season). Kyle did one thing very very well. And well, since his departure it is something we've had a lot of trouble with.

The case for Raja Bell was, back in those dating game posts, the point that he was a good % shooter. He hardly ever took shots though. Let's re-visit those very same percentages with our five potential 'dates'. 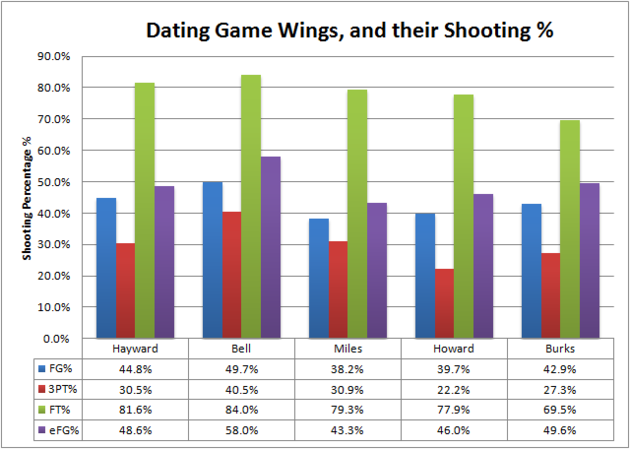 Raja Bell still shows his value here being Tops in all four categories. If you look at the specific shots one by one you see some interesting things. The first thing (to me) was that Burks really should be shooting better from the line. He gets there the most out of all 5 guys -- and he shoots the worst from there. Sticking with free throws Howard used to look GREAT early on because he was pushing 90% on his free throws, but now with the season ending, the only guy he's finishing at the line better from his peers is Alec. Hayward is shooting like Stockton from the line right now -- except on technical free throws, where he shoots like Fesenko.

The most 'acceptable' metric here is actually FG%. Hayward and Bell are at the top of the class here as well. C.J. Miles is having a horrible 'making' season, and Howard, well, he's also doing poorly. Burks needs to up his % here too, but it's a higher starting fg% for a jazz rookie than some of the other guys who started off here (like Quincy Lewis, DeShawn Stevenson, Sasha Pavlovic, C.J. Miles, and many others).

The big problem here is three point shooting. Outside of Bell, well, no one is really hitting. Hayward finished last year shooting 47% from three, and is down to 30% this year. C.J. for all his faults is actually shooting better than Gordon this year. Howard sucks from deep -- that's not his game. And well, Burks wasn't supposed to be making three this year, but from his sweet spot he clearly does. The bad thing is that he takes threes from more than just his sweet spot.

Lastly, well, eFG% is something that nerds (like me) like. Top of the class is Bell. Who is #2? None other than Alec Burks. This is what encourages me . . . Burks can be an efficient player (unlike Howard or MIles who were never efficient in their careers). He needs to take better shots, and develop more confidence, but I think that Burks can be a legit wing player with legit three point range.

Hayward CAN and HAS hit from there, but I don't know what's wrong with his shooting this year.

Over-all in terms of the dating game right now I think we're in the waiting game for Hayward and Burks. On average, wings we draft get much better over time at shooting. How much so? Well, from the sample list I have so far it's by adding +5.3 3pt%, +2.7 ft%, and +2.6 eFG% over their careers.