I spent my Monday morning hanging out with my son and doing what fathers and sons do. We watched sporting events. We spent the morning rewatching and analyzing game 1 of the playoffs. On Sunday I watched the game to watch the game. Yesterday I watched it to see what went right and what went wrong. And this point there are some encouraging things to take away from the game...and some major concerns. But I start you with this tidbit from Marc Stein's piece on the game (Stein is a Spurs fan and probably hasn't seen more than 5 Jazz games all year.)

(I'd also like to see Favors get more time after sparkling back-to-back rejections of Duncan and Ginobili in a productive first-half stint.)

I watch my fair share of game tape to try to figure out where things break down or where things work, but I don't often share that on the downbeat. But after watching game 1, I honestly think that Derrick Favors needs to play 32-36 minutes every game. He HAS to play. The main reason is that both Al Jefferson and Paul Millsap are very bad in space against, Tony Parker, for instance when they have to switch onto him. And on top of that Al Jefferson really struggles when hedging the pick n roll. Here are some pictures: 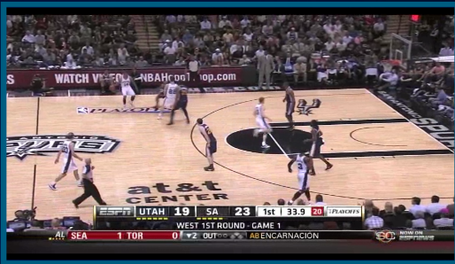 Tiago Splitter sets a screen on Tinsley and Al Jefferson comes out to hedge (deter) the ball handler and hopefully slow him up or force him away from the screen. But look what happens: 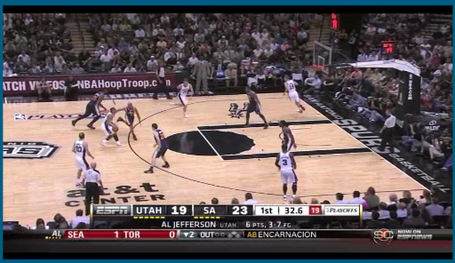 Al Jefferson hedges so hard and doesn't really slow down Gary Neal much. Splitter rolls to the basket and now Derrick Favors is left to choose between guarding Tiago Splitter who is right under the basket or Matt Bonner at the 3. He can't do both and the Spurs get an open Bonner 3, exactly what they wanted. Some will tell you this is unguardable and that the Spurs are just that good. But if that's true, we might as well just stay in Utah and not even show up for the games. Playing Favors more minutes to bolster our defense of the pick n roll would be a good start.

Not enough can be said about Gordon Hayward's game 1. It was a performance that slips under the radar easily, but not only did he make 12 of 12 free throws, he really muted Manu Ginobili. Ginobili started the game 3 of 4 from the field with two dunks and one 12 foot baseline jumper. He then misses his next 6 shots the rest of the game and only shoots 2 free throws for the game. This is the same Ginobili who shot 6 free throws a game the last time we met him in the playoffs, including a 15-15 performance.

As for the free throws I am having a hard time finding a guy who got to the line 12 times in their playoff debut. He attacked the rim aggressively and often. When Malone scored his 23 points, he only shot 3 free throws. In his 3rd season, in his playoff debut, Lebron James went 7 for 11 at the free throw line. It took Dwyane Wade 10 playoff games before he shot over 10 free throws.

Finally, it can't be emphasized enough what a strange decision it was for Tyrone Corbin to start Josh Howard over Demarre Carroll in game 1. It's not even that Carroll is the obvious choice, because he doesn't do anything spectacularly, but he played that much better than Howard in game one, who basically gave the Jazz nothing in that game. If the Jazz start Carroll instead of Howard, they still probably lose. But that isn't a reason to justify the move.

I watched Moneyball the other night and couldn't help but think of some Utah Jazz coaching decisions when I watched the scenes with the scouts. If you wanted to know, Coach Corbin represents the scouts.

Or Maybe the coaching staff represents the scouts.