Utah Jazz Statistics: Establishing a relationship between PPS and LR

Share All sharing options for: Utah Jazz Statistics: Establishing a relationship between PPS and LR

Back in the good old days of SLC Dunk I had zero obligations, and I would occasionally write 7,000 words on who should be the 5th big on the depth chart. Times have changed, for one, the Utah Jazz went this entire season with only 4 bigs; and also here at the site I've had less time to truly go deep into stats like I used to. Well, it's the off-season now and I have some more time on my hands.

In my line of work you kind of strive for efficiency. When things drop below a normal range you start to get worried. It's all about making sure things are within normal ranges, otherwise you're going to experience break down. We experienced break down in the NBA Playoffs this year. We made it to the playoffs because as a team, we were #4 in offense and averaged just a hair under 100 points per game (99.7). Against the San Antonio Spurs we only averaged 86.3 points per game, rounding up. That's a difference of over 13 points a game. Like I said, we got to the playoffs on offense, it's not like our defense stepped up. As a result, inefficiency in our offense was exploited.

Another metric I'm toying with right now is LR, which is Line Ratio. Clearly something of my own design it's also very simple. It's the percentage you get for free throw attempts divided by field goal attempts (FTA / FGA). In the playoffs a key way to absorb the difference in intensity is to retain vestiges of efficiency by getting to the line. I wanted to see if there existed a relationship between PPS and LR. And thus, find that 'base line' for what "good efficiency" is.

After all, this isn't the human body. This is a basketball team. "Normally accepted values" don't get it done. We need to excel. We can't hitch our team to guys who are inefficient. Period. No matter how much we love them and their $15m dollar expiring contract.

This is it. Listed top to bottom by PPS value. The guys on how team that took the most shots (Al and Paul) are in the middle 5 group. While our younger core of fast scoring transition terrors are in the Top 5. The Bottom 5 are guys who are barely making 1.00 point per each shot. Just so we don't go to fast, in the game of basketball each time you put the ball through the orange thing you get 2.00 points.

Does a relationship exist between PPS and LR? Let's take a look . . . 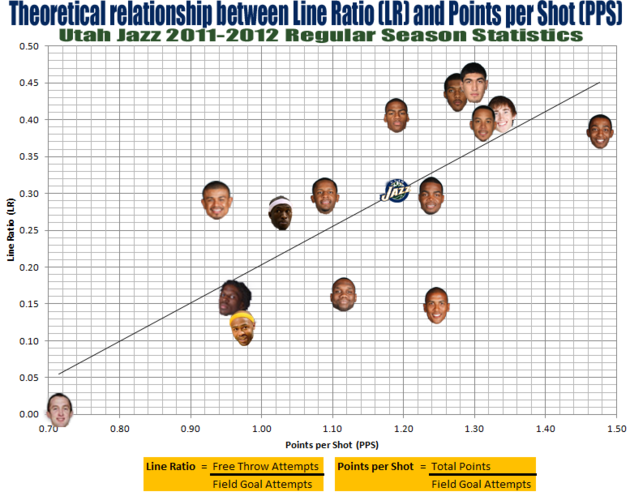 Clearly we can see some groupings -- those guys at the Top Right (higher PPS and higher LR) -- these guys SHOULD be your higher efficiency players. OF course, in the playoffs Devin and Gordon played quite poorly when it came to shooting the ball; and Alec did not get the calls he needed to boost up his PPS. Favors and Kanter did well, and so did Evans (in fact, Evans scored more in the playoffs from the line than from the floor).

We also have some guys who don't go to the line who also have lot PPS values. This is, well, I guess normal. But do they not get to the line because of minutes, or shots or what? It's hard to made a clear case for causation, but a correlation seems to appear.

Does a relationship exist?

Perhaps, however I'm more likely to just believe that certain types of players just end up taking better shots. Those Top 6 dudes (Evans, Hayward, Harris, Kanter, Favors, and Millsap) all score a lot of points by going into the paint, going into traffic, and trying to get layups. They get fouled. They go to the line. And they have the best PPS values on our team. I think if anything the relationship exists between play type.

And not just LR and PPS.

An interesting thing to add would be Mins / game and FGA / game.

What was the point?

The point was to find the guys on our team who were a) efficient on offense, and b) capable of going to the line at a fair rate so that in the playoffs they can still draw fouls and be effective on offense. I think we found which guys this applies to.

Sadly, our #1 offensive weapon is either average, or below average depending on how honest you want to be about this. This is not something we should overlook. Especially if they aren't shutting guys down on the other end. (I think an on-going issue will be how we talk about Al Jefferson being the reason for making the playoffs, while also being part of the reason we played so poorly in the playoffs. Woah. That's heavy.)