It is rare that you see the thesis of a post so clearly laid out in it's title. However, in this case, I decided to eschew any subtleties to instead see the most important part of this post in quite large letters at the top of the screen. That way, if the Jazz brass happen to stumble upon SLCDunk, they can get the point of the post quickly and easily. And that's important to me.

But, I would encourage them (and you) to read on, in order to truly understand why Paul Millsap is our best player, and why it would be a mistake to trade him, even though we have a really awesome new Derrick Favors toy.

Here are the top players by BasketballValue.com's Adjusted +/- over the last two years. Quick adjusted plus/minus recap: you may know of regular plus minus, which simply tracks how much a team's lead or deficit grows or shrinks when a player is in the game. Of course, that can be affected by a whole bunch of factors, including, of course, how good a player's teammates are. You might expect Joel Anthony's +/- to be really good, because he has exceptional teammates in the starting lineup in Miami. In order to account for this fact, adjusted plus-minus adjusts for the other players on the floor. The result is that Lebron, Wade, and Bosh's Adjust +/- is really good, and Joel Anthony's is below average. Just as it should be.

Because of how much noise can be in +/- statistics, they need a really large sample size to be meaningful. Luckily, Paul Millsap's been good over the last two years, so much so that we can be extremely confident that he's a really good player: using that standard error above, we can calculate that there's only a .07% chance that Millsap is merely an average player, and a 99.93% chance he's above average.

That kind of surety is actually pretty uncommon when looking at APM (adjusted plus-minus). It means that by this measure, Paul Millsap is fourth in the entire NBA in affecting the score when he is in the game. As you may know, one extremely important factor in winning basketball games is scoring more than the other team. When Paul Millsap is in the game, the Jazz do this extremely well. That's pretty important. 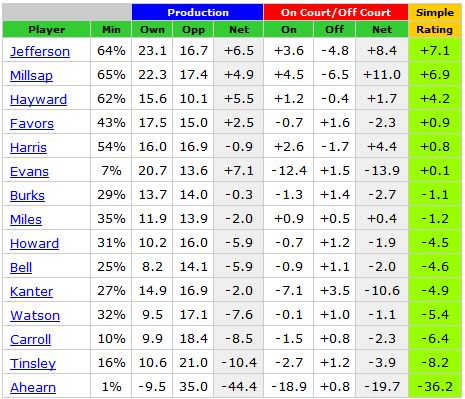 Another way to look at a player's effectiveness is to look at his performance compared to that of his counterpart at his position while in the game. According to 82games.com, Millsap produces at a 22.3 PER while in the game, while allowing his opponent a 17.4 PER. That differential is good for 3rd on the team, behind Jefferson and Hayward.

I like Favors a lot, but when he's in the game, the Jazz actually do -2.3 points worse overall per 100 possessions. This is likely due to the fact that, for most of the season he was in the game when Millsap and Jefferson were out, our two best players.

Luckily, 82games.com stats help us look at this problem as well, by looking at how Millsap plays as a 3.

We all know that the big lineup was our best lineup, and it was it's success that allowed the Jazz to thrive in their playoff push. But interestingly, Paul Millsap's numbers seem to not be impacted at all by his move to the 3 in that lineup, in fact, he seems to play better. Perhaps his size is actually better suited to play at the 3, where opposing SFs aren't all taller than him (as is usually the case when he plays PF). Of course, small sample size warnings apply here, but it doesn't look like you hurt Millsap's production when you move him in the lineup, which has been a huge worry in the past. I think the viability of the big lineup full-time should be its own post because it leads to interesting schematic changes, but suffice it to say that you'd have to play Millsap at the 3 is not a reason to trade him. It may, in fact, be the opposite. 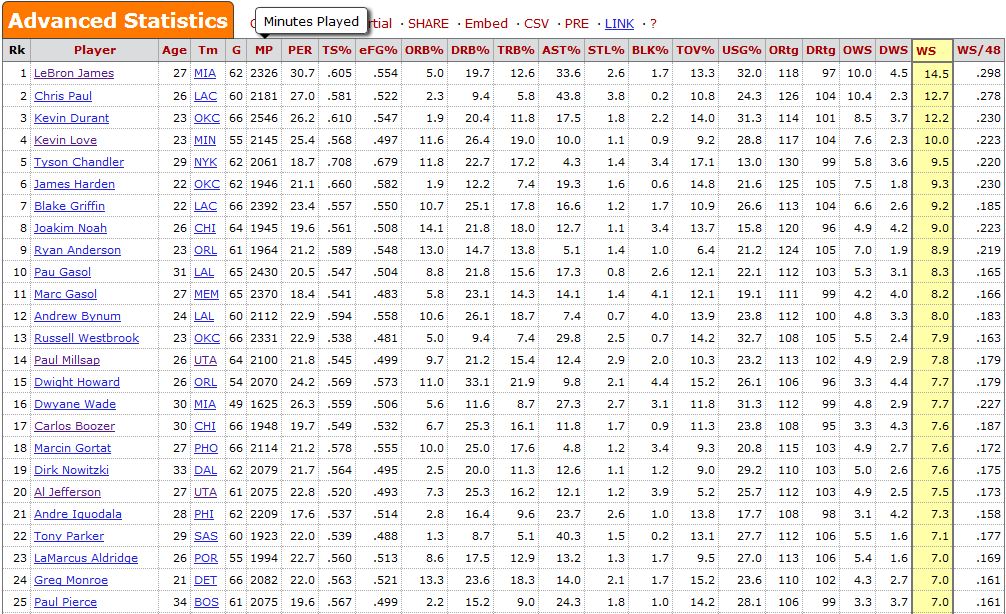 That is a list of the top 25 players in the NBA this season, as ranked by Win Shares (click on the picture to see the full image). Win Shares is a metric that was actually first introduced in baseball, by the famous Bill James. It's a rather simple idea, really: Win Shares tries to break up the wins that a team achieved over the course of the season and finds out who deserves credit for them. As you know, the Jazz had 36 wins. The Win Share system divides those 36 wins amongst the roster. Josh Howard, for example, is responsible for less than half a win. The system works. (To be clear, I think Win Shares has some flaws. But that's another, more nuanced discussion.)

Paul Millsap is responsible for 7.8 wins under this scheme. That puts him 14th in the NBA, in between Russell Westbrook and Dwight Howard. You may have heard of them. Importantly to some, this puts him ahead of Carlos Boozer. He's also got the cheapest contract in the top 25 of anyone not on a rookie-scale deal. This, of course, points us back at our thesis: Paul Millsap is really good.

By some very important metrics, ones relating directly back to wins and points, Millsap is amongst the NBA's best players. One likely reason for this is that he is one of the NBA's best players. To be clear, he has faults, but every player does. But when looking at the total picture, Millsap shines. Given this level of production, it would be insane to trade Millsap, because it will be very difficult or impossible to receive matching production in return.

Favors showed near the end of the season that he deserves minutes, and that could certainly be accomplished by trading Millsap. But doing so would be counterproductive to winning. After looking at the evidence, I recommend keeping Millsap at all costs, unless an incredible offer was presented to the Jazz.