Share All sharing options for: The Jazz Have More 3 Point Problems than Not Having 3 Point Shooters- Part I

[Ed note: Moved to the top of the page by popular demand : )]

Originally I ventured to write a post featuring the best 3 point shooters in the NBA and how the Jazz need to acquire some of them to improve offensively. I will still include that as part of a later post, but as I delved into the world of the 3 point shot and the Utah Jazz, I found that the Jazz first must change their offensive feelings of the 3 point shot. They need to embrace it and utilize it and, heaven forbid, purposefully shoot more of them.

"Well good," you might think to yourself. "If we aren't good at shooting 3s, then we shouldn't shoot them." And there is some truth to that. But the truthier truth is that the Jazz have had a long standing "issue" with 3 point attempts, even if they were decent at making them.

If you aren't noticing a trend, in short the Jazz shoot about 13 three pointers a game no matter if they are hitting 37% of them, or 31%. There is a reason for this that will be discussed later. But you could probably call this a Jerry Sloan approach to three point shooting, as it has existed for years. In 96-97, when the Jazz made the finals and had the most efficient offensive team in the NBA, they only shot 8 three point attempts per game, and Jeff Hornacek, who we all remember mainly for his deadly outside shooting, only attempted 1.6 threes a game. That's crazy.

But you can obviously be a great offensive team, even at the expense of the 3 point line...

Yes you can, as the Jazz have shown in the past, in the finals years and in 2007-08 when they were the 2nd most efficient offensive team in the NBA. And over the past 10 years, you will find that about 40% of the top 10 offensive teams, weren't top 10 in either 3 point % or 3 point attempts. But my personal theory is that offensive efficiency is directly correlated to being very good in one of 3 categories, 3 point % and attempts, fg% (somewhat related) and free throw attempts and percentage.

But for a team that shoots only the 17th most free throws in the league, San Antonio had a very dominant offense, primarily by shooting the best field goal percentage and the best 3 point percentage with the 7th most attempts in the league.

On top of that, how many times have you regurgitated the line "we need outside shooting in order to spread the defense and keep the opposition from packing the paint?" I would guess we each said that once this season. The assumption is that when you have good 3 point shooting, it will lead to better shots inside. This correlation seems true for this year's Spurs team and is the subject for a research project for another day. But after watching the Jazz struggle against the Spurs in the playoffs, I imagine we can agree that versatility in the ways an offense can score is a great trait to have. And there's room for improvement in the 3 point department.

"Use only in case of an emergency"

At the locker room clean out a few days ago, Kevin O'Connor mentioned that he thinks the team can improve their 3 point shooting. I agree with him, but I think that would take some forethought and planning. If your plan to shoot and make threes is to stand on a spot and wait for a pass from a double team or penetration, then I think you could do better. Every NBA player, and every Jazz player has hot spots. You can see the distribution of those shots on NBA.com's Stats cube site. My crazy theory is that if we could find out where the Jazz players shoot the best from 3, then we could, I don't know, maybe get them shots at those spots. This is what that site tells us: 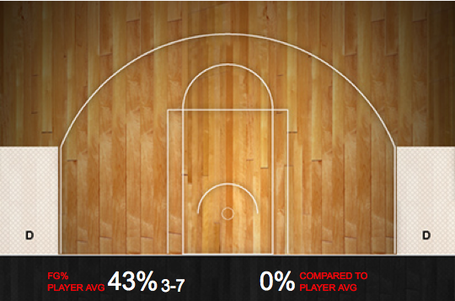 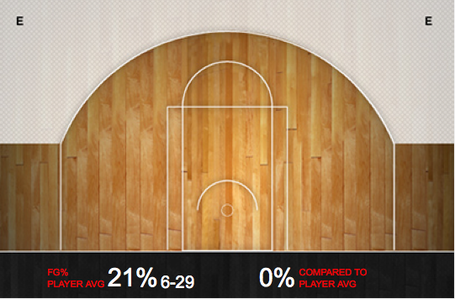 What we know is that Josh Howard was a 25% three point shooter this season. What these graphics show us is that Josh Howard was actually pretty decent at shooting corner threes, which tend to be spot up three pointers (no one dribbles into a corner). Now of course Josh only shot 7 threes from the corner, but it makes you wonder, "what would happen if Josh shot, 30 threes from the corner? And if he can shoot 30 threes and go 43% from, that is good enough for the Jazz to run some plays for Josh to shoot corner three pointers, instead of letting him shoot wing three pointers (presumably in desperation, if I remember correctly.)

Here are the other top 3 point Jazz shooters: 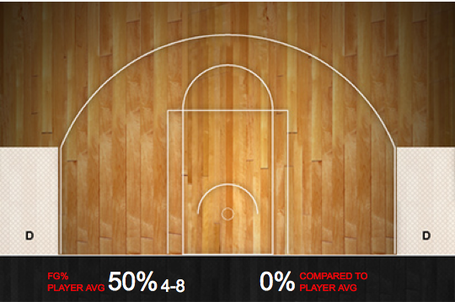 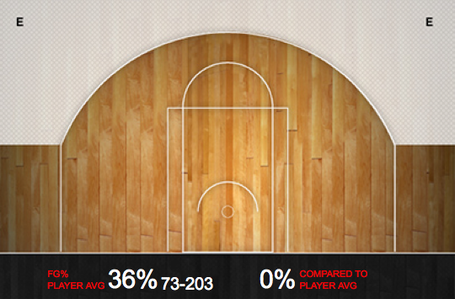 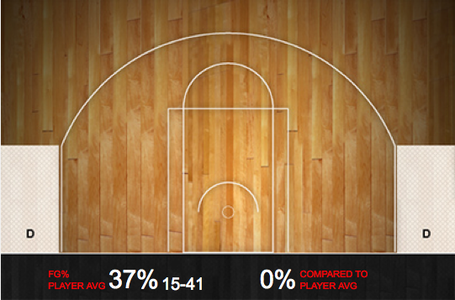 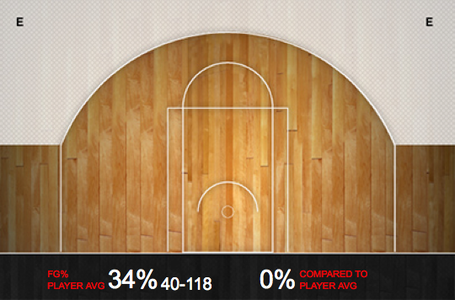 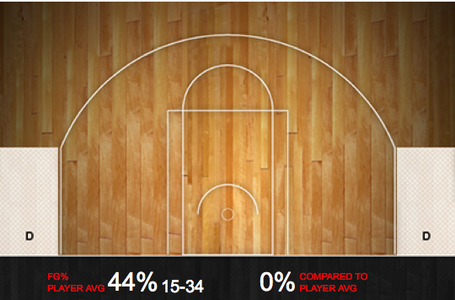 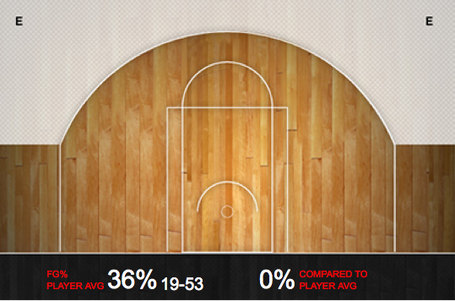 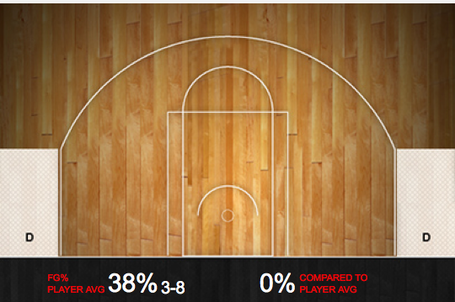 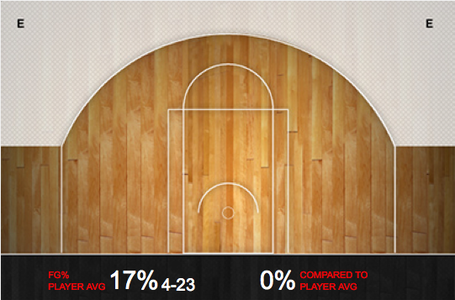 THE PROBLEM: The Jazz don't really run plays to get three point shots.

After breaking down every Jazz players' hot spots from three, that led me to rewatch the three pointers the Jazz took this season via mysynergysports.com. It's pretty easy, actually. You can zoom from 3 point attempt to 3 point attempt and watch every attempt for a whole game in about 5-10 minutes. So I started with 10 games, and then went to 20 games and so on. The numbers didnt really change from each 10 games. These numbers I will share with you will be true for all 66 games. So let's discuss. First I would like to show you a breakdown of each game, so you know what we I mean when I diagram a shot.

Miss- Bell- right wing in transition off Harris long pass- down 9 with 3 mins left in the game, 14 secs on shot clock

So that is what a game break down looks like. It gives us an idea of how the Jazz are getting threes. As you can see, the Jazz went 3/9 from 3 in that game. Six of those 9 shots were spot ups off passes. This is how the Jazz get three point shots. They don't plan to shoot threes, but they feed the post or drive to the basket and the shooters stand and wait at the three point line. They aren't planning to shoot threes, but they are leaving it as an option. There was only one play in 9 three point attempts that was definitely an intended three point shot. Two of those threes were "desperation threes." For my purposes, a desperation 3 point attempt is a shot from greater than 30 feet in the last 3 seconds of a quarter, a three point attempt with less than 5 seconds on the shot clock and not off a spot up, or a three point attempt with less than 90 seconds left in the game down by 8 points or more.. So if a guy is dribbling with 5 seconds left on the shot clock and pulls up for a three, that's a desperation three. So with that knowledge, here is how the 40 games I scouted looked like:

-274 of those 383 spot up threes were taken with 5 or less seconds left on the shot clock.

-In 40 games, the Jazz took 69 threes off set plays, with 11 of those in late game situations

But What Does It All Mean?

What this means is that the Jazz don't shoot very many three pointers and that it is by design. They don't run plays that intend to get them three pointers. They shoot their three pointers off working the ball inside, which is really no surprise. The huge surprise to me is that the Jazz shoot 30% of their threes because they are absolutely forced to. That doesn't even include the 12% of three point attempts that are shot in the last 3 seconds off a spot up shot. This leads me to my conclusion and thesis of the Jazz offense:

Why is the corner 3 so important? I will talk about that in Part II.