The question that we will all wonder this offseason and the question asked by Radiohead in the song "The Bends" is "Where do we go from here?" As we all know, Derrick Favors, Gordon Hayward, Enes Kanter and Alec Burks are the only Jazz players under contract past this season and so the next 3 or 4 offseasons are going to have their fair share of player movement. Where do the Jazz go from here? They could essentially bring back the same team from last year and make another push for the playoffs with a hope of internal growth. Or they could add a few free agents that address current team needs, or the team could trade a piece like Al Jefferson, Paul Millsap or Devin Harris for a little better roster balance. One thing we know is that this team is not going to "rebuild."

I hate to rain on everybody's hypothetical dream parade, but with the talk about what free agents to pursue and what have you, I think we need to clear something up right off the bat: the Jazz don't have very much cap space to pursue free agents. 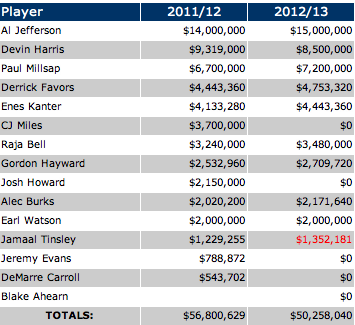 This salary breakdown from hoopshype.com is very helpful in looking at our immediate cap space. Without boring you with too many of the details, the Jazz would have about $6-8 million in cap space hypothetically, depending on what they decide to do with DeMarre Carroll, Jeremy Evans and Jamaal Tinsley. The Jazz also have a $10.8 million trade exception, in which they can use to acquire a player or players with salaries that add up to less than $10.8 million this year. If you want to know more about that Trade Exception, I wrote about it right after the Okur trade. The only problem is that I didn't include the fact that the Jazz could use the exception to acquire a free agent through a sign and trade scenario. More on that in a bit. But the problem is that the Jazz don't have 6-8 million in cap space AND a trade exception. Without going into even further details, the Jazz would have to give up their traded player exception if they wanted to use their cap space. So really they have either the TPE or cap space, which is important. The Jazz do have a Mid-Level Exception that is basically $5 million a year that they could use with their TPE. Confused yet?

Many Jazz fans are getting sort of geeked up about the prospect of bringing Andrei Kirilenko back to Utah. It's a super exciting prospect for many of us, but economically it would be difficult and that is why I wanted to explain things from point #2.

[Ed. Note: This was a picture of Andrei driving to the basket]

The Jazz cannot acquire Andrei Kirilenko through a sign and trade into their traded player exception. He would have to resign with his previous NBA team in order to do that and he doesn't have a current NBA team. So the Jazz would either have to dump salary in order to clear more cap room or else convince Kirilenko to take the Mid-Level Exception, which would pay him roughly 3 years, $16 million or 4 years $21 million. If Andrei were willing to take that sort of money, then great. But is it likely? The Jazz desperately need a small forward and in a lot of ways that aren't three point shooting, he would be a great fit here. There is no arguing that, even if you don't like the guy. But I just don't see Andrei (or his wife and agent) taking only the MLE when he will presumably have bigger offers elsewhere.

So count me in the camp that thinks it would be fun to have AK-47 back in Salt Lake City, but who doesn't see it happening for non-basketball reasons. @LostTacoVendor just sighed a huge sigh of relief.

A guy that would be easier to acquire than Andrei Kirilenko, economically, would be unrestricted free agent Steve Nash. Jazz fans got all hot and bothered about 3 nights ago when Chris Broussard of ESPN's NBA fastbreak mentioned that the Utah Jazz were a team that interested Nash, along with the Heat and Orlando, etc. Obviously you have to take Broussard's rumors with a large grain of salt, but there is no doubt that Utah makes some sense for Nash.

David J Smith a writer for the Utah Jazz 360 website and also for Deseret News, wrote a little piece about Nash to the Jazz that is worth a read.

Smith explains how Nash would be a good fit and breaks down the teams that will be players for Nash's services. Here is the full list of teams I believe Nash would consider:

I can give you reasons why each of those teams doesn't work out for Nash, including the Jazz. But what I know about Steve Nash is that he is looking for a chance to win and a chance to be in a great position for his basketball talents. There is no doubt that Nash knows the personnel the Jazz have, both as a team, and as a front office. And there is no way that this situation isn't somewhat appealing to him. I put the Jazz as the 3rd best situation on that list of teams. If he came to Utah, the Jazz would immediately become a top 5 seed in the West and would be a legitimate dark horse for the title.

The Jazz can also outpay a few of those teams, believe it or not. Unlike AK, the Jazz can acquire Nash into their traded player exception. So if Steve Nash decided he wanted to play for the Jazz, he could sign, say a 3 year, $30 million deal with Phoenix and then be traded to the Jazz for a draft pick, or a player with a small salary, or for Ante Tomic's rights. The best case scenario would be to trade Devin Harris to Phoenix for Nash in a sign and trade scenario, but is certainly unlikely.

So while I don't expect Nash to join the Jazz this offseason, it is plausible and it would be a good situation for all parties involved, including Nash. Don't listen to anyone who says there is no chance Nash doesn't join the Jazz somehow this offseason.

In other interesting news that should interest the Jazz, Orlando Magic's contract for 2012-13 is fully unguaranteed, meaning that if the Magic decide to trade Dwight Howard and blow the team up (more likely than not), Redick would probably become a free agent if the Magic waived him before July 7th this summer. Redick would make a great addition to the Jazz, mostly because of this: 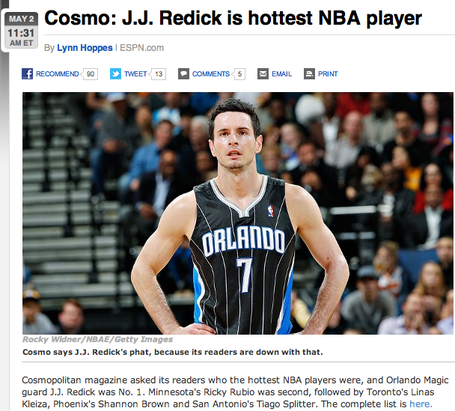 My pipe dream scenario for the Utah Jazz is that they trade Devin Harris, the 8th pick in this draft and whatever else short of Favors and Hayward for Stephen Curry and trade Al Jefferson to Milwaukee for the signed and traded Ersan Ilyasova. But since that has less than 2% chance of happening, I would settle for a sign and trade of Steve Nash and signing JJ Redick to the Mid Level Exception.

What is your dream scenario for this offseason? This will be fun. We have all summer.