Note: my visuals have been severely minimized, please just click on the picture to view a larger version of it. After all, moving your head 2 inches away from the screen draws attention from your boss... and we certainly don't want that now do we?

Rebounding is one of the most misunderstood fundamentals of basketball. It is too often seen as "just that thing big athletic players naturally do"—but that can’t be further from the truth. Rebounding is all about technique and mindset; two things that all players can develop.

If you look down Al Jefferson’s stat sheet, you see that he is averaging nearly 20/10 a night… and you must be thinking "man this Al Jefferson dude must know how to rebound—I better watch some video of him to learn his technique". However, if you watched the actual games he played in (or listened to the Red & Blue Show), you would be cussing out Al Jefferson for his lack of effort in the pursuit of the ball. Throughout the season, I too confused as to how Al Jefferson was able to post 10 rebounds a night despite the alleged lack of effort. In this article, I hope to straighten many of these confusions out as I break down some frame by frame stills that capture Al Jefferson’s logic when he goes up for a rebound.

Before I can start analyzing Al Jefferson’s rebounding, it is important to understand the different components of rebounding. Rebounding, specifically defensively, depends on positioning and a determination to get the ball. Positioning is done while the shot is in the air, or as coaches like to call it, the "dead time". In this dead time, you always assume a miss so it is imperative to do your work early to put yourself in the best possible position to grab the rebound. This involves bodying your man up, boxing him out, and anticipating the rebound location. Once the ball hits the rim, it’s primed for someone to snatch it, and that is when pure determination comes to play.

If there was one thing coaches couldn’t stress more about rebounding, it’s doing your work early by boxing out. Boxing out is so important because it creates a seal on your opponent not only to give you the best position to get the rebound, but it also stops the pursuit for an offensive rebound by your man. To help illustrate proper technique, take a look at these stills of Biedrins and Duncan. Notice their activity during the "dead time", along with where their eyes are.

As you can see in these pictures, immediately after the shot is taken, Biedrins and Duncan both immediately take their attention off the ball handler and focus on boxing their man out in order to get position for the miss. Because of their activity during this dead time, their man (Evans and Jefferson in this case) are either stopped or slowed down from getting the offensive rebound. (Even though Biedrins was not able to fully seal off his man, the intentions were right in terms of immediately concerning yourself with your man and not the rebound itself.) Judging from the way they shifted their line of vision from the shooter to their man and boxed out immediately, you can see that they assumed a miss and motivated themselves to get in a position to grab that miss. Now look these stills of Big Al (pay attention to Al’s man, along with the direction of his vision): 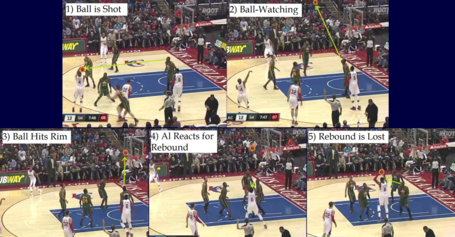 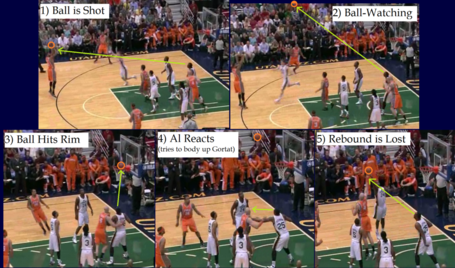 Once the ball handler shoots the ball, you can see that Big Al is standing under the basket and watching the path of the ball. This a huge no-no, because he spending the "dead time" watching the ball instead of boxing out and that is due to the fact he’s not assuming the ball will be a miss. You should be reacting to get the rebound during the dead time, but Big Al isn’t starting to react until the ball hits the rim (look at the third frame in both stills.) By doing this, you now only have the time from when the ball hits the rim to when the ball is grabbed—as opposed to the time from when the ball is shot, hits the rim, and then when it’s grabbed. He lost all the "dead time" and now has very little time to do the proper work to get positioning (boxing out) for the rebound. Another consequence of Big Al not bodying up his man is it opens up an opportunity for his man to get an offensive rebound. This happened both times when Jordan and Gortat were able to go around Big Al and easily get the offensive rebound as Big Al turns to them and slaps his hands in disappointment.

This was a repeating pattern, I am not just cherry picking situations like this. From all the different rebounds he was/was not able to get, there was this same trend. He was consistently caught ball watching and often did not battle for early position (boxing out). Rarely did I ever see Big Al initiate any contact. The only time he bodied his man up, it was when the opponent initiated the contact—and even then Al wasn’t able to (or refused to) battle back. Here is an example of that happening: 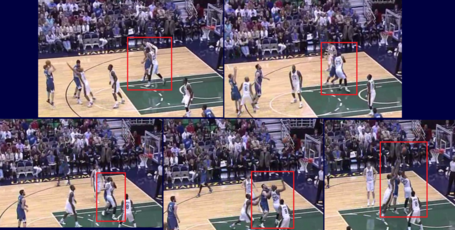 So what is Al Jefferson doing right? Surely 10 rebounds a night doesn’t magically appear on the stat sheet because David Stern loves the Jazz. It turns out he does a great job in terms of using his agility, jumping ability (yes, I said agility and jumping ability), and as cheesy as it sounds, determination to get the rebound. As I watched the film of Al’s rebounds, very rarely did I ever see him mistimed his jumps. Along with the timing, the technique of jumping for the rebound was outstanding. It was always balanced, jumping straight up off two feet going strong with both hands. This helps explain the reason Al Jefferson doesn't like to box out, because it distracts him from timing his jumps. As you can see in the above picture with Al and Pekovic, Al is unable to use his solid technique because being banged by Pekovic. 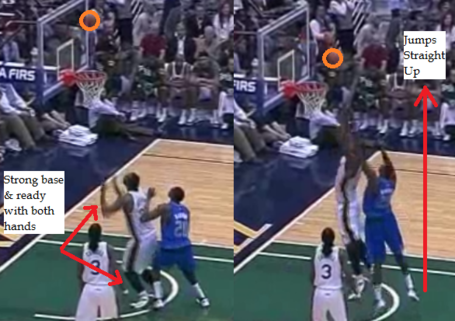 Along with his great technique, he also does an amazing job with predicting the location of the rebound. 70% of all rebounds come off on the weak side, and Al understands that. Big post defenders are usually unable to take advantage of this statistic because they are pretty much pinned to their man, and the location of their man will determine the angle they use on a rebound. But when Big Al is free-roam rebounding, he makes it a commitment to get to the weak side—I may even argue it is in his instinct to. This is evident in these two scenes:

In this one you can see that once the ball is shot, Al Jefferson is in "no-man" land, so he runs in to get the rebound. See how he immediately goes for that middle spot in front of the rim—that will give him the best chance to grab the rebound (which is likely to bounce towards the weak right side.) I’m sure many of you will be saying that Big Al is only running to that location because he acknowledges Marc Gasol’s presence there, but I know that is not the case because look at where Big Al is looking in the second frame. He is focused on the spot, and not on Marc Gasol. Another reason is that I know Al is worrying about getting to the spot and not Marc Gasol is because Al doesn’t make an attempt to slow down Marc (like bodying him up or cutting his path). Al simply uses his agility to get that covenant spot before anyone else. 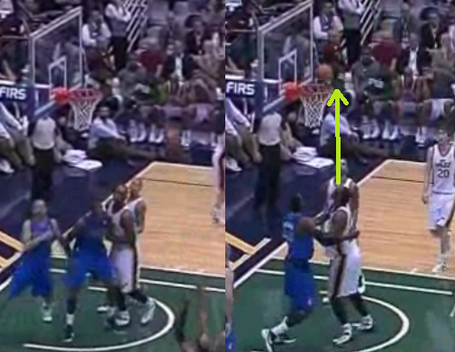 This picture shows that Big Al has that natural instinct to expect the rebound off the weak side. In this scene Vince Carter shot the ball and it rebounded back towards him (the strong side) (and yes, Big Al was caught ball watching). It is really hard to capture Big Al’s reaction in stills, but when the ball hit the rim and recoiled back to the left strong side, Big Al’s head remained focused on that weak side for a split second delay before turning his head to the direction of the ball. This shows that once the ball hit the rim and Big Al reacted that rebound was to be had, he expected it to bounce towards the weak side even though it didn’t.

Wrap Up- What I Found:

When it comes to rebounding, we see that there are a couple of golden rules that should be given special attention when rebounding.

1. Battle for Good Position- this involves using "dead time" to do your work early by boxing out, assuming every shot is a miss, and not watching the flight of the basketball.

2. Use Proper Technique- this involves timing your jump correctly, going up strong with both hands and feet, and anticipating the rebound in the weak side.

What we saw from Al Jefferson is that he does not do a good job in battling for good position. Too often is he caught spending the "dead time" just standing stagnant and watching the ball go through the air. In addition to allowing his opponent to challenge for an offensive rebound while he’s watching the ball, it subconsciously makes Al assume the shot is a make. From the stills, you saw that he doesn’t want to body people up, it almost seems like he resists it judging from the Pekovic-Jefferson scene.

Despite his deficiency with the first rule, his technique is very good. He’s just one of those people who have a "knack" for the ball by consistently going up strong for the rebound. He also makes up for the lack of contact caused by boxing out by using his agility to run to best spot statistically to grab a rebound. It seems as if the reason Big Al doesn’t concern himself with boxing out and/or bodying players up is because he is focused on his technique. When you don’t have a fat guy that you’re trying holding off (yeah that’s you Pekovic and Blair), you can rebound well with the great technique Big Al does.