Locke is conducting season reviews on all the players at Locked on Sports. Be warned, though—it's pretty heavy.

Each player's analysis will be divided into seven parts (Al's has been finished, Millsap is currently at part 2), and there are a whole lot of stats in them. And besides being filled with a whole lot of stats, some of them are pretty obscure. Paul Millsap, apparently, has an activity level of 583.5. What does that mean? I have no idea. And I couldn't find a handy link in which the more obscure stats are explained.

But there is enough written commentary to get a feel for what Locke feels the stats say.

But of all the commentary, this to me says the most. It's specifically about Al Jefferson. But to me it says much more about the plan of the Jazz coaching staff:

He went from 38% of his offense being post up to 48% this year. Last year he was 74th in the NBA in post up and this year he is 19th, a huge improvement. His shooting percentage out of the post increased as well from 42.7% to 47.5% this year. A year ago he got a higher percentage of his offense off the cut and he is more efficient in those plays.

No shock that Al go a huge percentage of shots as post-ups, nor that he did a lot more this year than last. And I'm glad he's improved. But no matter the improvement, it's still nowhere as effective as his scoring off cuts. Synergy says he shoots 48% on post-ups and 64% on cuts.

I'm certainly not calling for Ty's head. My hope is just that he improves. That he abandons less-effective ideas and takes hold of more effective ones.

The more I investigate, the more I'm convinced that simple system changes could have a strong effect in how well the Jazz play next year.

By now you probably know that Kevin O'Connor was:

First the second of the two: I don't really like this award. And here's why: the Jazz have a pretty decent chance of being a great team by about 2013-14. That will be Year 4 of Favors/Hayward plus Year 3 of Kanter/Burks. As long as KOC plays his cards right during the next year, seeking and finding the right guys around them, they'll be really good.

But if things work out, why will the be so good? Because of the moves KOC made in 2010-11—picking Hayward (a fairly outside-the-box pick), the Deron trade for Favors, the guys acquired with the picks from that trade (Kanter, and the mythical GS pick), and getting a steal in drafting Burks at 12.

Real teams are built over years, with some good long-term thinking. The Executive of the Year Award rewards the GM who makes the most splashy instant-gratification moves that year. So in a way I'm glad KOC didn't win the award.

The Competition Committee makes decisions about rule changes to improve the NBA. It used to be made up of all 30 GM's. Now it isn't. It's both smaller and more diverse, including coaches, GM's, owners, and one player.

This is the committee that would decide on things like anti-flopping rules, eliminating offensive goaltending, etc. Amar already wrote up a detailed explanation and listed the other members of the committee, so you can check that out if you want more of the details.

I'm excited about KOC being on this committee. Mostly because it gives us a whole new set of complaints and dreams that we can now end with the refrain:

This is about the Spurs. But it's also about the Jazz. We all freak out at times over the thought that one of our favorite guys may leave Utah for the bright lights of elsewhere. I think losing Deron—and knowing the trade was necessary because the chances of him staying at that point were a bit slim—scarred us a bit.

So ... how do we make our stars desperately want to stay with us? Well, here's what Chris Ballard at SI wrote about the Spurs, Popovich, and Tim Duncan:

The story of Duncan's career begins on an island, in the summer of 1997. That's when Popovich flew down to St. Croix to meet his team's No. 1 draft pick. On the first day, Duncan took his new coach swimming. Out they went, one man tall and assured, the other short and as pale as the sand, his arms churning furiously. Duncan led them past rocky outcroppings into deeper water, the shoreline of the island quickly receding. Popovich began to think about how far out they were, about what lay beneath, about the waves cresting off the rocks. Still, he kept going, determined not to show weakness.

Over the next three days—or two or maybe four, neither can remember—the two men swam and lay on the beach and ate, talking about life and family and priorities. Everything but basketball. Despite a difference of nearly 30 years, they connected in a way few athletes and coaches do. Today Popovich tears up just talking about it. "I really cherish that time," he says. "It was like an instant respect and understanding of each other. Almost like we were soul mates."

From that point on, the two were on the same page. Other than a brief flirtation with the Orlando Magic in 2003, when Duncan was a free agent—he and Pop stayed up late drinking beers in Pop's backyard, talking it through—Duncan never wavered in his commitment to the team. This, in turn, allowed Popovich to build his highly successful system, the tenets of which were simple: The offense runs through Duncan, the defense runs through Duncan, and if you don't like it, you're gone. It holds true to this day. "I like role players who aren't very good but have a skill," Pop says with a chuckle, though he is not joking. "I know who's going to have the ball on our team, and need players who understand this."

Kevin O'Connor, Greg Miller, and Ty Corbin—if you want our young studs to stay with us, if you want them to have loyalty to match their greatness, if you want to be able to have time to build a team—because it takes more than two or three years to build the right team—if you want these things as much as I do, then:

Build treat them like this and work to build this kind of relationship with them.

A couple of pictures. First, it was my 6-year-old's birthday last week. Here's his birthday stash: 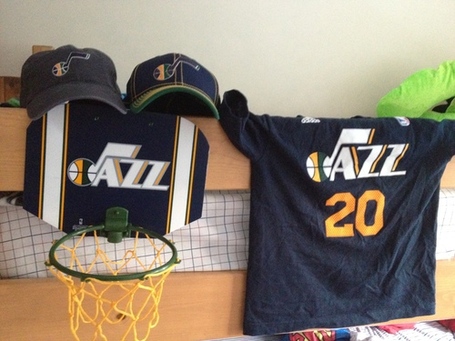 And second. At the final game of the regular season, the Jazz Dancers were at the ESA doors, passing out the most random "The first three thousand fans will receive" gifts of all time: A Derrick Favors Cooking Apron. Yes, I have six of them now. 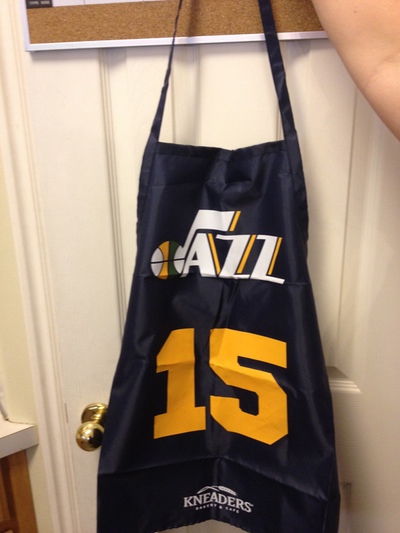