Jazz vs. Spurs Game 2 Preview: You can't plan effectively for someone you don't understand

Share All sharing options for: Jazz vs. Spurs Game 2 Preview: You can't plan effectively for someone you don't understand

Spurs Head coach Gregg Popovich knows the playoffs. He has coached 291 games in the second season, and has a career winning percentage of 59.9% there. He has helped his team win four rings. And he has two Coach of the Year trophies. His playoff coaching career is three times as long as Tyrone Corbin's entire coaching career. (3.06 Pop just in playoffs : 1.00 Ty) Also Corbin has just one playoff game under his belt, Game 1 of this series.

When I was involved in a little preview of this series with JR at Pounding the Rock he likened this particular match-up to being Chess vs. Checkers. I conceded the point because it's both accurate and valid. Ty is a relative novice in this world. That said, it doesn't mean automatic victory for the Spurs. The Utah Jazz are mostly all novices. And what a grand master cannot fully comprehend would be the silly moves a novice makes. IN this small regard, the Jazz' collective novelty in the playoffs gives us a degree of uncertainty. We're not the Jerry Sloan / Stockton and Malone Jazz. We're the Ty Corbin and Kids Crew Jazz. If this was an 80s movie we'd be the rag-tag bunch of dysfunctional campers at the summer camp that shares the lake with the privileged kids camp.

We may not automatically win this series, or even this game. But we'll finish this summer with a greater understanding of who we are and we'll be the 'real winners' because we would have developed life long friendships and memories of this wild summer -- which all would contribute towards our future successes as we grow more confident. And also, you totally know Enes Kanter is going to make out with the most awkward, foreign exchange cheerleader on the Spurs team.

What went right in Game 1:

In Game 1 the Jazz really tried to go inside. The collective three-headed monster of Al Jefferson, Paul Millsap, and Derrick Favors finished the game a combined 19-35, which is 54.3 fg%. Those guys scored a combined 43 points and 26 points. To beat the Spurs I think those guys will all have to average out to 16-10 in a game. Their Game 1 numbers averaged out to only 14.3 and 8.7. So they quite aren't where I think they needed to be -- however they did shoot a great percentage. If they make it to the line a bit more I think they can boost it to 16 per. The rebounds was something I mentioned before -- the Jazz did great on the boards; however, I think they'll still need to do better.

Gordon Hayward was very aggressive, and got to the line 12 times. He pushed it on the break and got some advantage. His work contributed to the Jazz finishing the game with a +7 point difference in Fast break points. Slowing the game down to allow the Spurs defense to set up is going to hurt us. The Jazz need some easy baskets -- and transition may be a way to get it. Hayward finished with 17 points, off of an amazing 2.83 points per shot. And just so you recognize how crazy this is, we all know that in basketball if you take a normal shot (not a three, not an And-one) that the maximum points you can get from the shot is 2 points. He was closer to three. It was a call back to Hayward's amazing play in the Orlando Summer League from his rookie season where he scored something like 2.6 pps.

The Jazz only sent the Spurs to the line 28 times. This is good news, as none of our guys were in foul trouble. However, like most of the points in this section -- there is a darker lining behind it. Did the Jazz not send guys to the line because they just gave up on some plays? Did they not challenge enough shots? Were they just giving up free layups instead of making the other team work for it? Perhaps.

What went wrong in Game 1:

It will take a team effort to make life hard for Tony Parker and Manu Ginobili when they want to get into the lane. Parker finished with 28 points, and 10 free throw attempts -- and 8 assists. He got whatever he wanted in the lane. He also got in the lane in a variety of ways -- driving, off of picks, off of cuts, good passes, and so forth. The Jazz did not really do much to get him out of there and he killed us. Whatever theory we had of an improved pick and roll defense (from beating up on the Phoenix Suns and Orlando Magic) did not come into play in Game 1. Furthermore I was really upset with how our bigs reacted to dribble penetration. They would go into some absurd "Arm pits out, escort mode" to the rim where they would shuffle along Parker (or any other Spurs guard) and not try to block the shot (or cut off where they wanted to go), and then get called for a foul by bumping them with their stomach while not actually trying to block the shot with their arms.

It made me very upset. That needs to change. If you are going to give up the foul -- don't also give up a great layup while not playing defense. Go for the block, make the Spurs have to complete a crazy play for a layup and-one, don't make it easy for them. Or, alternatively, just take the foul. Wrap them up. I know Parker shot 92 fg% vs. us, and Manu 93 ft% vs. us -- but they are pretty much (blown dunks aside) shooting 100% on these "arm pit out escorts" to the rim.

This all falls under part A from above. The other part, B, talks about giving the Spurs guards a reason NOT to go in the lane. Either this comes as blocking their shots (which we weren't trying to do), or giving them the lumber. IT's the playoffs after all. And no, I'm not advocating for an elbow to the head -- that's just abhorrent behavior in today's knee pads and tampax NBA. I am still advocating for playing a little more physically. We're pretty much a team that isn't tough. So I completely understand the arm pits out escort. It just hurts the idea that I have of how the Jazz play in the playoffs for them to be doing that.

Don't do anything dirty. Don't go for the head. Don't hurt anyone. But if you are going to be called for the foul -- then foul the guy. Use your arms. Go for the block, but if they are calling stuff on the body so tight -- put your body into it. It's not going to be the worst thing in the world if you knock Parker on his ass in the first quarter. The fans will boo. But our guys may finally grow some balls. I've never seen Kevin Garnett play defense the way we're playing defense. We don't need to be cheap villains, but we don't have to be so soft either.

The majority of the Spurs attack -- essentially everything that went wrong in Game 1 -- was based upon dribble penetration. If we gave the Spurs a reason to hesitate a bit more on these sorties into our paint maybe it'll give us half a step more (that we need) in order to close out on their spot up guys or gather and jump up to attempt a blocked shot. Baby steps.

In game one Tim Duncan was really active and he was throwing it down. It was a throwback performance where he abused Al Jefferson on defense. Duncan finished with 17 points (50 fg%), 11 rebounds, 5 assists, and 2 steals. Al Jefferson finished with 16 points (50 fg%), 9 rebounds, 4 assists, and 2 steals. According to their regular season stats, Jefferson should be winning this contest (not just in season averages, but also for what Duncan averaged vs. the Jazz this year, and what Jefferson averaged vs. the Spurs this year). If the Jazz are going to do "anything" in game 2, it needs to start with Big Al. I'm not expecting Al to turn into a great defensive player after 2 nights rest. I do expect him to get to the line more than once though (Duncan got there 5 times). Al is at his physical peak. He needs to push Duncan in this series and beat him. 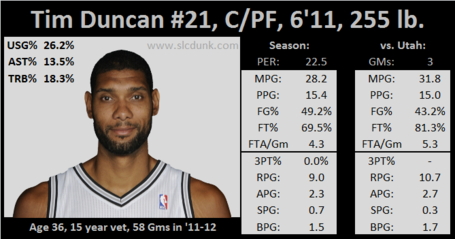 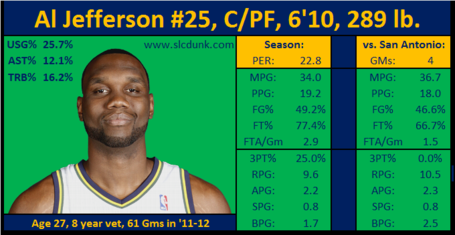 Game one had Manu Ginobili taking the night, pretty much, off. Manu shot 3-10, and while he still did a little bit of everything (3 rebounds, 4 assists, 2 steals), life is so much easier for the Spurs when he's also scoring. Gordon Hayward was Manu-eqsue last game. For the Spurs they'd want to see Manu be Manu, and Hayward be a second year player who is playing in his 2nd playoff game in his career. I don't expect Manu to have two bad shooting games in a row -- and I fully expect HIM to be very assertive in Game 2, maybe giving MVP candidate Tony Parker a bit of a rest tonight. 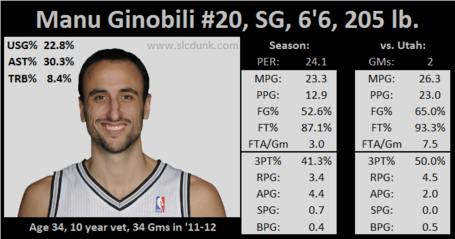 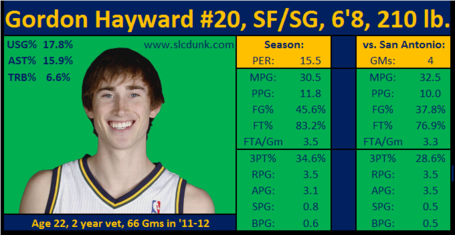 It will always be the paint.

For the Spurs, I was really impressed with the a la carte game of Boris Diaw. He was around the same size and mobility of Paul Millsap -- and actively took it to him on isolations. He had this great rolling hook shot (I'm leaning on calling it the baguette.) If Diaw can once again make life hard for Paul Millsap then things are going great in Spurs Land. For the Jazz the X-Factor has to be Josh Howard. Howard has been awful all season long, but one of the teams he was least awful against was the Spurs. He's a veteran. He's starting. He's in a contract year. Nothing will help him better than playing well in this series. He started off Game 1 like an epileptic patient on speed. Dude needs to slow down and play with the team, not play against the Spurs. 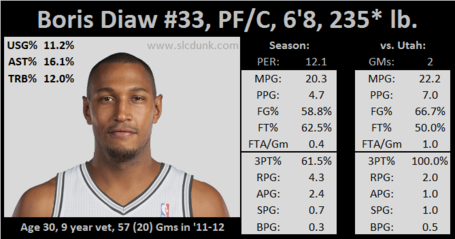 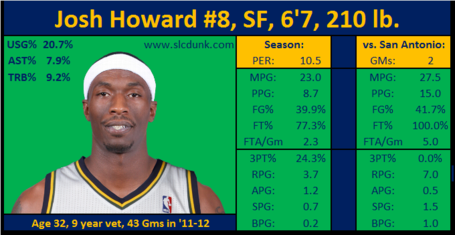 If the Jazz can get anything out of Howard then they have a shot to keep it close enough that something crazy can happen.

The Jazz need to adjust how they defend dribble penetration. The Spurs don't really need to make many adjustments -- just try to do better at a) making their open shots, and b) try to get more defensive boards. Because Pop can only assume what Ty is going to do (vs. KNOW what Ty will do) there is this level of uncertainty going into Game 2. Of course, part of this is because Ty isn't that experienced, and he also may not know what he's going to do tonight. The Jazz did have two nights off to figure something out. Barring a really cool montage to prog-rock music that happened over the last few days I don't expect the Jazz to pull this one out. But I think they would have made strides to build on what good things happened last game.

It will be fun. It will be exciting. And thankfully, it's not at 1 pm EST this time around. Game starts in 2:30 hours!