Share All sharing options for: Looking Forward and Back with KOC, J-Slo, and Burks - The Downbeat - #754

Kevin O' Connor was on 1320 KFAN yesterday in the afternoon, and actually only gave 2 no comment type of answers in his 22 minutes of being on the radio! Among some of the more interesting revelations:

For a KOC interview, it's relatively informative and revealing. Check it out.

About Roy Hibbert... KOC says that he was disappointed when Indiana traded with Toronto to get the 17th pick, because he feels that otherwise, Hibbert was likely to fall to the Jazz. What was that trade? According to DraftExpress, it was:

First of all, the trade, while not announced, was reported the day before the draft. Surely, Kevin O'Connor would have known about the trade and have had time, about 24 hours, to work to make a trade for a pick above #17.

Second, I feel like the Jazz could have offered Toronto more value than this trade. The Pacers sent Jermaine O'Neal (who was a huge risk at the time, for good reason, it turns out, and was still being paid $22 million dollars a year for 2 more years), and Nathan Jawai, who is just salary filler. In return, Toronto gave up a pick and their starting point guard (who, admittedly, was also a huge risk, but at much lower dollars).

Now, it's hard to judge stupid, and this was a stupid trade by the Raptors. Perhaps the Raptors' particular form of stupid really wanted a defensive big man, no matter the cost. Hollinger defended the deal at the time, saying that it set up the team for the 2010 free agency bonanza (TJ Ford had just signed a 4 year deal). I don't know why they thought they would be a player in 2010, though. Perhaps the Raptors secretly knew that TJ Ford would suck for the next three years (even though he had a 20.6 PER pre-trade), and wanted to save themselves the reasonable contract. Who knows. The Jazz probably didn't have to offer what the Raptors wanted.

As a side note, this is what makes judging a GM's performance so difficult: you have no idea what options were available to them. It's entirely possible that the Jazz did their research and picking the highly-rated Kosta Koufos was the best move for them when considering the near future. It just doesn't look so great now, from the fan's admittedly blind perspective.

That being said, sometimes the correct course of action is to be proactive, and make a trade for the player you think is one of the best in the draft. The Jazz weren't super-flexible that year, but perhaps could have done something like C.J. Miles + #21 for #17 or a pick above that. And it would have landed the Jazz a future all-star. Roy Hibbert was a missed opportunity.

The Jazz occasionally send out an email full of articles about the team. The most recent was this one, and it featured articles by me (on Paul Millsap) and Alec (on Al Jefferson's rebounding). So that's pretty cool, for a bunch of reasons.

What this means is that any of your writings can be read by the Jazz(!), regardless of who you are or what you write about. If you are critical, but fair, your arguments will get a second look. And that's all we can ask for as a writing community.

Now for the social media section of this Downbeat: Jazz fan Bret Baker (@thegoldenwest) made this tribute to Jerry Sloan and posted it on Twitter, it was then shared by Mr. Spencer Hall of Salt City Hoops. 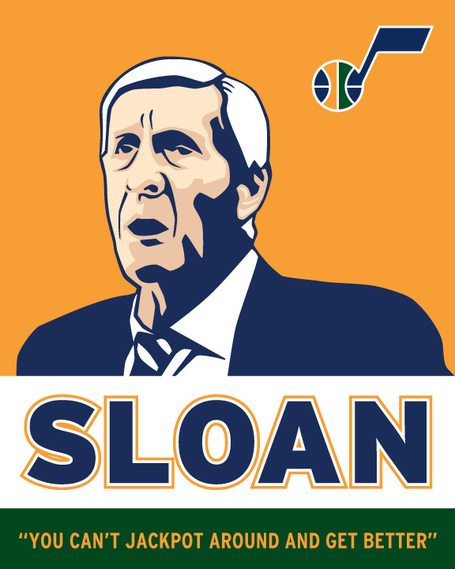 They then both edited it and made it into a Facebook cover image, so that I can scare all of my friends with Jerry Sloan yelling at them.

Admittedly, this cover image was less popular than I imagined it would be. I think I often overestimate how much my real-life friends care about the Jazz. For some reason, they don't see it quite the way I do. But you're all free to use it, if you'd like.

Alec Burks tweeted this on Monday night... and I completely agree. You see, as a 20 year old, many of your friends are older than you, and have been going to 21-and-up establishments for a long while now. It's a bummer to be left out as they go places you're legally prohibited to be. I turn 21 this Friday, the 25th, and I, like Alec Burks, can't wait, if only to regain the freedom of social interaction.

Indeed, it's probably worse as an NBA player; you have lots of older friends, and if anyone ever caught you doing anything the least bit suspicious, you'd be reported immediately, especially in Utah. Heck, even this tweet caught some attention, some on Twitter worried about Mr. Burks' behavior though there was no reason to at all.

Therefore, I guess, give little Alec some slack. He's already being teased in his mentions, and he doesn't turn 21 until July 20th. He has some time to wait, and as it gets closer, it gets harder and harder to do so. He's been nothing but a good kid, is an excellent young player, and we want him in this community for many years to come. Let's do what we can to be as welcoming and supportive as possible.