Macho Toughness vs. Silent Strength of a Stone - The Downbeat - #756

Share All sharing options for: Macho Toughness vs. Silent Strength of a Stone - The Downbeat - #756

The toughness of our Jazz team last year has been questioned several times. Whether it's JJ Barea bumping Hayward at the FT line, or Dirk smacking the ball out of the hands of Derrick Favors, besides Earl Watson our team seemed to be a little soft.

In the aftermath of the ugly Miami-Indiana game, I'm wondering what kind of toughness we want from our team. Do we want our team to go as far as we saw in that game—the head attacks masquerading as going for the ball, and elbows intentionally thrown at guys' throats?

I'm also reminded of what Tim Duncan said about his silence and unflappable game face (sorry for everyone who is tired of me gushing about the Spurs) in the same interview I quoted last week:

His on-court demeanor is so reserved that The Onion once ran a story titled, TIM DUNCAN HAMS IT UP FOR CROWD BY ARCHING LEFT EYEBROW SLIGHTLY. This impression is intentional, it turns out. Duncan has said he uses silence to "destroy people's psyches." He explains, "The best mind game you can run on someone is just to keep going at them and at them until they break." Don't respond, don't show emotion. Just keep playing. "Eventually," he says with a grin, "you'll piss them off."

I suppose in the end, the question is the same: what kind of toughness do you hope our guys can develop, and how do you hope to see such toughness manifested?

This season I mocked the "winning culture" vs. "losing culture" paradigm KOC used when he defended giving veteran players playing time over the kids. I still say it's ludicrous. I also say that missing the playoffs one or two times doesn't necessarily establish a "losing culture". Though if you do it like Golden State, then you probably will.

Ultimately I thought it was a copout and the worry doesn't apply to the Jazz at all. Here's a quote from John Hollinger about JaVale McGee:

Turns out he's not just a punch line. McGee showed more development in two months in Denver than he had in four years in Washington, particularly on the offensive end where he showed some refinement with a sweeping hook shot. McGee still takes ridiculous chances on blocking shots he has no hope of reaching and leaves his feet constantly on the defensive end. On the other hand, he went for 21-14 against an elite frontcourt to key a close playoff road win, rejected a phenomenal 22 shots in 181 minutes, and had three 14-rebound efforts in seven games. In other words, while he's still something of a project, he's a productive project

The losing culture of the Wizards come from a front office that has no idea what it's doing, years of coaching staffs with no control of players, and a collection of knuckleheads on their roster.

But move a player from that incompetent team to one with a good front office, with a good coaching staff, and players who aren't idiots, and suddenly he actually starts making progress. As Hollinger stated, "more progress in two months ... than he had in four years in Washington."

A losing culture or winning culture is not dictated by whether a team wins most of its games or not in a random year. It's created by a front office that knows what it's doing. And that's why I always felt safe. While there are times KOC bugs me, he's one of the most competent GM's in the league.

Hickory High (a truly fantastic blog) posted some graphics to illustrate a team's offensive effectiveness. It charts both the most effective plays in terms of both players and play type. For example, on the Jazz a Millsap cut was the most effective scoring play. A Josh Howard spot up was the worst. The graph also shows the frequency with which a given play was used. It doesn't include every single play and player—only those used at least 100 times last year. Here is the Jazz: 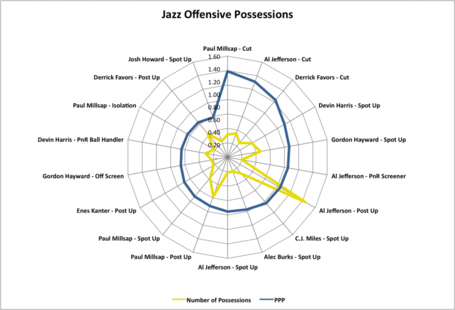 This chart just kills me. The Jazz really do have a variety of decent offensive options. And that variety will only get more diverse and more effective as the kids continue to improve. But there's one play that the team depends on over and over and over: the Al Jefferson post up. Notice that the only other spike is the Millsap post up.

So that's our team's offense. No wonder it was stagnant and easy to defend by the Spurs in the playoffs.

Here's to a bit more offensive creativity in the future. More movement, please.

Here's a list of things I hope some of the young players improve next year. We'll start, of course, with my favorite dude on the team:

I really, really dislike how long the NBA playoffs get drawn out—all so TNT can try to do their 40 in 40 thing. The best series of the entire playoffs may be the Spurs and Thunder ... and it will begin 6 days after the lesser LA team was booted.

I remember playoffs back in the early 90's—there was a kind of steady crescendo of excitement from the first round to the NBA Finals. I feel like that is missing today because it takes so much time to finish a single series. And then so much extra time to start the next one.

I have my own ideas about what would be better—but they're involved enough to need an entire post. But what would you do to improve the NBA playoffs?