This last season we got to see, straight up, that this team is rebuilding a contender. The Utah jazz played 66 games in the regular season, and made the playoffs. We played in playoffs games, guys! There were a lot of doubters, myself included. But the Jazz proved me wrong. That said, the Jazz weren't really in all of the games they played in. Part of this was based upon HOW we played -- the Jazz had a good offense, but our defense was a bad as it's every been. While the playoffs games were not really hard to predict -- the Jazz did win enough to get there. I respect that. But the Jazz have a number of things to work on.

Our "deal" was scoring. We were the #4 team in the league in points per game (PPG). Even though we we finished the season with a -0.4 margin (for all 70 games). No doubt, the playoffs were a big reason for that.

How did the Jazz score from quarter to quarter? Were we slow starters? If so, was this an issue of who we were starting games with? Or just the fact that the other team had better starters than we did?

Numbers, graphs, and accusations after the jump! 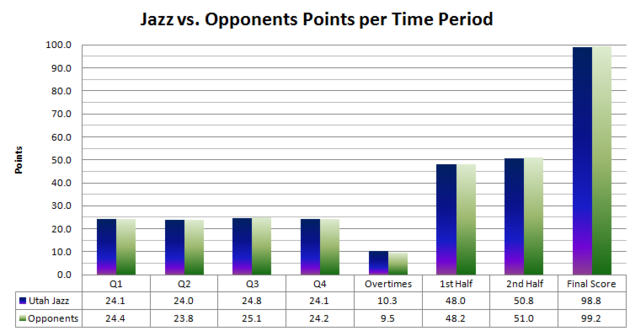 The Jazz did score less in the first quarter than their opponent. Their starters outscored ours. And we saw this again in the third quarter. Over all that adds up to being, on average down -0.6 points per game. That's nothing, right? Well, over the course of this season that means we're down -42 points. That's not good. But hey, that probably means nothing right. The guys make it all up in the 2nd quarter.

Oh yeah, that's when we have our bench guys playing. Forget I mentioned that. Our starters are without flaw. And our coach picks who starts in a flawless manner as well. Why do you hate the Jazz so much, Amar?

Over all, the Jazz are losing at halftime, and lose at the end of the game as well. Being on the wrong end of blowouts contribute heavily for this. We were blown out more than we blew other teams out. And we're a high scoring offense according to the data. I guess we should play our better defenders more. Oh, wait. Those guys are pretty much bench guys.

Still, the team managed to go 36-30 in the regular season, which helped us to a 36-34 overall 2011-2012 season record. We score more than the other team enough times to come out positive -- but over-all we were outscored. And it started in the first quarter.

Vs. the Other Seven Western Conference Playoff Teams: 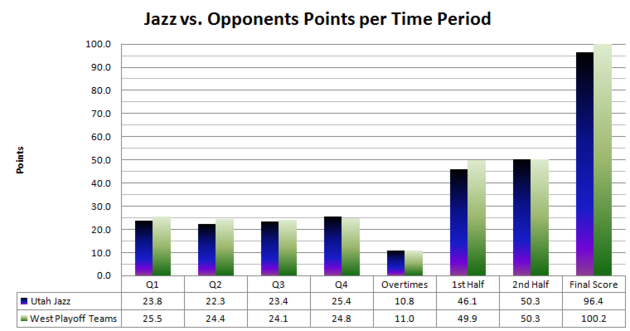 Oh dear, this is less promising. We're down at halftime by 4 points to these teams. Not surprisingly, Tyrone Corbin plays our starters more minutes against these playoff clubs than against the non-playoff clubs. So that's not good. The Jazz even things up in the second half (50.3 to 50.3), but over all the final margin is worse.

It's not rocket science for these numbers to look this way, we were the #8 team in the West -- and when we're playing the #1, 2, 3, 4, 5, 6, and 7 Western conf teams they are supposed to do better than us. The record shows that it was actually closer as the Jazz went 13-16 in these games. (With four straight losses coming in the playoffs)

So again we see the W/L record being close than the raw data. But we also see the Jazz being down big in the 1st Quarter and 3rd quarter in these games. If we theorize that the problem isn't our offense then it has to be our defense. Our team needs to play better defense. Part of that is playing the guys who are better defenders.

We also need better rotations for our players. We need that to improve to.

But I think there is evidence to suggest that we weren't a good 1st quarter team. And a poor first half team against the best of the West. It's hard to come back in every game.