Share All sharing options for: The Fourteen Wings of Hornacek: Part 1 - Playing time

Once upon a time there was a wizened old Master, Master Hornacek. He was patient and skilled master who had moved from the hard desert lands where he gained a lot of notoriety towards the eastern lands. He moved back west in the year 1993-1994 -- and from there joined a powerful mountain monastery of the Jazz Clan. There he trained hard, and alongside other great Masters he reached the highest peaks of individual and collective success . . . before moving again to travel the world.

He would return, and has returned. Now he works to train at that same Mountain Monastery. Master Hornacek trains younger players today . . . but today he may have finally found that perfect set of students. He has found the Fourteenth Wing of Hornacek...

Jeff Hornacek was the perfect compliment to John Stockton and Karl Malone. Hornacek was a former All-Star (Western Conf All-Star), and dead eye shooter. He was also a combo guard who could play SG and PG, and was capable of driving, passing, getting to the line, and shooting from the outside. He was basically Manu Ginobili -- but on the downswing of his career (check out his USG% AST% if you don't believe me). He could do everything on offense, and play good enough defense to move the Jazz from a second round team towards a team that went to the Western Conference finals five times in seven years. Hornacek was the last time we had a great wing player. His number was #14. Since then the Jazz have added guys, traded guys, and drafted guys.

Right now (depending on the fables -- does Gordan Giricek counts? Does Harpring?) we have reached the Fourteenth Wing under Hornacek.

Not every player spent a lot of time with our franchise, and not every player was a team mate or coached by Hornacek. That said . . . let's take a look at their minutes . . .

Some guys have played a lot: B-Russ, Andrei, and CJ. 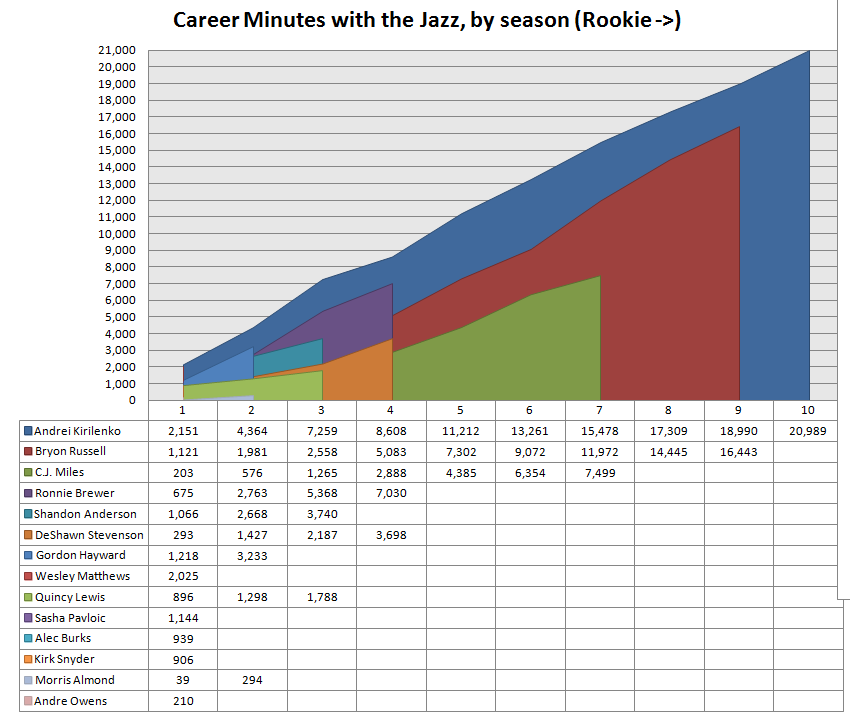 And on the same hand, some guys hardly played at all. CJ is a good example, B-Russ got a lot more PT early than CJ did. Hopefully guys like Gordon and Alec continue to get a lot of PT . . . because they are the two guys who may actually be the next great win player, something we haven't' had in a long time.

I'd go into more info, but I have a huge head ache and I'm going to take it easy. The successive pieces on the 14 Wings of Hornacek will be more interesting. Really. It's a cool Kung-Fu tale, based around Master Hornacek and the journey our players have to go on to become great -- and an analysis on the failures on all the guys inbetween Hornacek and our guys on the team today.