Share All sharing options for: Sunday Syncopation #49 and a half . . .

Jerry Sloan and the Bobcats? Trading the 27% of the Warriors pick back to them? Andre Iguodala? All of this and more in a Syncopation -- yes, I still do those, thank you very much!

The Sunday Syncopation used to be the only thing that was posted on the weekend back in the ‘good old days’. Or at the very most, the only thing *I* posted on the weekend. It was a way to make me feel involved, while adding some content to the website. This season we didn’t have any because I had way too much on my plate. I still do, but I can’t hold off on these . . . next week will be the "official" we’re back SS #50. I’m sure I half-assed (sorry phrase) it on a few of the first few ones – so here’s 49.5.

Jerry Sloan and the Charlotte Bobcats

I think many of us Utah Jazz fans were happy that Jerry Sloan retired. Or at least in our hearts I think we wanted him to retire. He did not. The correct terms always used by him, the team, and the media was ‘resigned’. It doesn’t mean he retired, and it doesn’t mean that he finished his career here. He just finished his career as the head coach of the Jazz. That’s over now. At first I had no desire for him to ever coach again. You know, how nice of me? "Hey, I’m a Jazz fan – I don’t want you to work anymore because you won’t be coaching our team in the future."

Well, I think I’ve come around to him coaching again at the NBA level – however all talks (and he’s only had one, and it was not an interview – just like Jerry didn’t retire he resigned, this thing he had last Friday with the Bobcats was a talk, not an interview for a job) and speculation (Orlando Magic, Portland Trail Blazers) is very premature. That said, it’s never too soon for the internet to run with a story.

This was brought to my attention by Alexis (@_AlexisHolt ), and was created by those NBA Memes dudes. 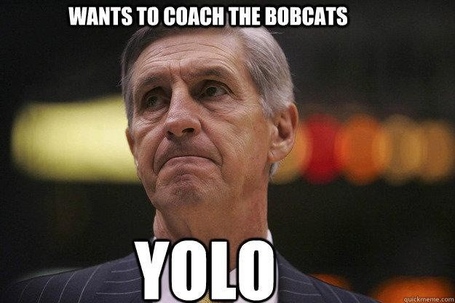 Very few other logical reasons have been examined, so maybe Meme Jerry has a point? Anyway, a WAY longer post on this subject is coming up.

This is going to sound crazy . . . but I don’t think this Jazz team needs to specifically get younger. Also, I’m not against trading some of our youth if it makes the team better in the now and the future. With all that in mind, I have no idea what’s happening in the Golden State Warriors camp. Clearly Diana didn’t do all of her homework, or she’s sitting on info. Because it doesn’t make sense. Either the Warriors are 100% certain that there is a good player at the #8 spot in this draft - - - or they are just trying to screw us in the future. IF we don’t get their pick this year we get it the next year. Are the Warriors likely to be Top 6 (and hence protected) next year? I have no clue. I do know that what we have here is a chance for Kevin O’Connor to get something for nothing. Well, it’s NOT nothing. It’s trying to get SOMETHING for 27.4% of something. That’s a greater than one in four chance that the Warriors give us their pick.

The other way to look at it is that it’s almost a three in four chance they keep it. I guess the question now is "How much can we leverage this uncertainty for?" I do want a GSW pick, I think a lotto pick is always a good asset to keep. Cash money (aka – what we got for giving up the Dominique Wilkins pick) doesn’t make me fall in love with our team. Instead I think I would have rather had ‘Nique, Stockton, and Malone. Instead we got cash, Stockton, and Malone. And no titles. Food for thought.

I trust Kevin O’Connor’s judgment when it comes to finding diamonds in the rough. In a loaded (theoretically) draft – I think he could find just the right guy. I’m not as confident with the other parts of being a GM as I am with how confident I am with KOC’s drafting. Getting rid of a DP for renting some scrub seems like a bad move.

Oh wait, we’re perpetually in a "win now" mode, so I guess maybe we’ll just end up trading something, and the 27% chance at this 2012 pick (and maybe the rights to any future GSW lotto pick?) for Dorell Wright. Because a dude with the same career win shares as Randy Whittman and Earl Boykins >>> a lotto pick. Or something. Hmph. I do light Wright’s three point shot though. We’ll see. Time will tell what KOC does. I just don’t understand what he has against youth (it was Gordon Hayward and DeMarre Carroll who got us to the playoffs as starters, not Raja Bell and Josh Howard).

Andre Iguodala and the Utah Jazz

The good folks at Liberty Baller’s (Philadelphia 76ers SBN site) and I had a nice back and forth about trading Iggy to the Jazz; and I invited the rest of twitter to join in too! It was fun. And interesting. I know the qualities of Iggy, but I never really studied him. After studying him, well, I started to worry. He is super athletic, a veteran, an All-Star, and can get to the line. More than that, he’s developed a very strong defensive game, which is something we do not have much of at the wing spots. That said, he misses FTs, he doesn’t have legit deep range, and his has become increasingly inefficient on offense. And you guys who read this site kind of know that’s what I’m really crazy for. 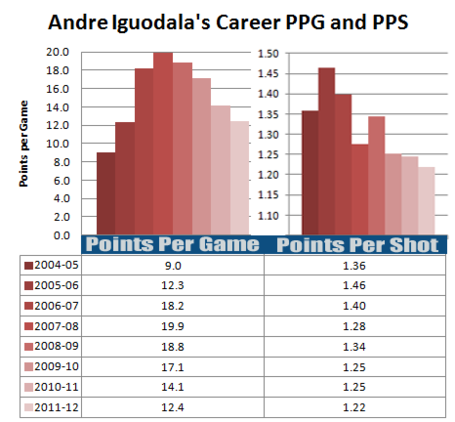 He continues to shoot very inefficiently (for him, his career numbers are still more efficient than Al Jefferson), as his PPG has gone down from almost 20 points a game to 12. If you are looking for a guy who can ‘eventually’ get you 12 points a game off of less than stellar efficiency you can just play C.J. Miles or Alec Burks more minutes. They both are cheaper than Iggy’s $14.8m contract next year – which becomes $15.9m the year after. I would be more willing to part with some of our older guys than younger guys if we’re taking Andre back.

The proposed trade was Enes Kanter, Raja Bell, Earl Watson, and our #47 draft pick this year – for Iggy. That’s too rich for my blood. Send them Big Al and Raja? We may be getting somewhere – but that’s just because I’m not happy with how those two guys defended last year.

And I guess that makes me a hater who hates the Jazz – shot hating the Jazz so much Amar. Big Al averaged like what Thurl Bailey did (as a 3rd option), that’s a great job by Al!

So much so that The Onion has had to continually write about them for much longer than they previously would have thought possible. Check this out:

SAN ANTONIO—In arenas, sports bars, and homes throughout the country, the San Antonio Spurs' dominating run through the playoffs has transfixed the nation with the breathtaking spectacle of their pass-screen-pass-shoot offense. "There they go, passing, doing a screen, passing again, and shooting the ball!" said South Dakota resident Roger Siler as he reviewed Spurs highlights on his computer. "Sometimes you think they won't pass it that second time, but then they do. They almost always do! And then they shoot the ball, scoring points. Wow." Perhaps even more thrilling is the fact that before viewers can get a chance to catch their breath, Americans say, the Spurs then get back on defense.

Man, The Onion is crazy. They do satire, btw, if you did not know. Article reproduced without explicit blessing from those guys – and you can find the original over here.

I still don’t know why these two guys are so focused on women’s under garments and snakes – but kids these days. I don’t know much about Lillard – I usually spend all of June learning about NCAA guys though. So, I guess there’s no time like now to look into it. Lillard is a SoCal guy who plays PG. He’s 6’2 and apparently played at Weber State. DraftExpress.com has him as the #13 pick in their mock draft, and the #3 ranked NCAA Junior. He seems to be quite capable of hitting the outside shot – which is something we’re going to need from the 1 spot.

Crap, I just found out why these guys know each other (aside from both having gone through the same camps and stuff growing up, and playing in college) – they both rock Adidas. That was the missing piece of information. Good stuff Amar. You’re not crazy, just slow.

. . . that Kyrylo Fesenko still somehow made $435,000 USD this year? He has played 17 total minutes in the regular season. And zero minutes in the playoffs. Yes, he had to work out, watch film, and be ready . . . but essentially, he has the job of a super-fan. He got paid nearly half a million to work out at the best gym, and play ball with some really good team mates – and fly around a lot. And get into a yelling match outside of a dance club in Orlando. Why the hell did I waste all that time in Medical school? Oh yeah, I’m not an athletic 7’1 guy who can dunk and play defense. Crap. Maybe in my next life . . .