A Request for KOC

Share All sharing options for: A Request for KOC

First of all, a disclosure.

KOC's people skills don't exactly dazzle me. I think he enjoys keeping RFA’s in limbo, making them wait out the Jazz match period as uncomfortably as possible. I think he enjoyed sending Deron to a piece of crap team—just to stick it to his former star who wouldn't commit. (Not that the trade was done for this reason, but this is the part that he enjoyed most).

I think KOC goes out of his way in the offseason to make players feel as unloved as possible.Nah, we’re not going to offer you anything Paul. Just get some offer from someone, and if you’re actually worth it, we’ll match. After leaving you hanging for all seven days.

Yeah, I don’t get all warm and fuzzy thinking about KOC’s disarming people skills.

At the same time, I think KOC is a good GM and I feel lucky to have him running my team. Particularly after reading this about other NBA GM’s, from Henry Abbott at True Hoops:

... I was told about a GM of a struggling team who, as described to me by a source well-positioned to know, showed up for work "less than part time." As in, a few hours a week.

Even after all the stories I've heard through the years, this surprised me.

A little while later I was on the phone with a front-office employee for another team. Without using any names, I told him what I had heard.

Could it be true?

His response: "Was your source somebody at our team?"

Wow. His GM was the same way.

I have since talked to people with two other teams who say their GMs just don't work very much -- that's four such current GMs I've been told about so far this week. None of those teams is likely to make the playoffs either...

I guarantee KOC ain’t one of these guys.

So yeah, I’m glad he works for our team. And if you look at his track record, he’s made decent free agent signings (Boozer & Memo), decent draft picks (Deron, Ronnie B., Sap, Gordon, Kanter, Burks), and decent trades (Giricek for Korver, KOOF for Big Al, Deron for Favors+Kanter+GS’s mythical pick).

But there are two ways I would like to specifically ask he do better. Two little things. Two itsy-bitsy changes that would have a profound effect on our team:

More after the jump

KOC has a penchant for letting things happen instead of acting, of worrying about today without thought for the future. Here’s some examples: 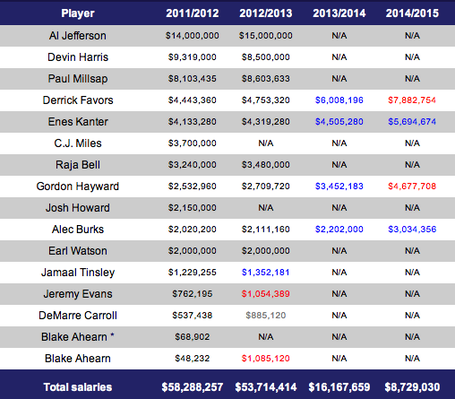 I love the four kids, but they’re going to need the right guys around them for this team to reach its potential. Specifically:

And we have about 14 months to find all these pieces. Although we may have one or two of them, we don’t have all of them. And the time to figure this stuff out is NOW.

Who’s the best PG for this team? Dragic? Or a rookie (Lilliard, Marshall, or Wroten)? The Jazz have the ability to almost pick whoever they want as long as they look at it now and use their assets to get it. Even possibly Nash (they could WAY overpay a 3-year contract if they can pull off a sign & trade).

Plus the Jazz have an interesting salary situation. They can overpay free agents/extensions/trades, etc. as long as the deals expire after the 2014-15 season because 2015-16 is when any extensions for Kanter and Burks kick in.

But the key to making it work is to plan ahead.

Plan now. Prepare now. Seek the right guys now. We have 14 months … let’s not end up with Devin as our PG and a ridiculously overstuffed frontcourt only because KOC didn’t worry about 2013 until 2013.

It’s about the right fit, not the player with prettiest stats

I’m astounded at how much this gets overlooked. Not only by KOC, but by the entire league. Here’s a KOC example:

Do you know what the Jazz really needed? A guy to replace Millsap’s production on the bench. And if you got that with another key piece (like maybe a strong SG/PG combo guard who would be a major upgrade to the backup PG and SG position on the bench) … well that would have been a good trade.

We’ve seen this before.

In fact, as I look over all the trades and free agent signings in the past 7 years only two actually filled a need: Memo and Korver.

This kind of philosophy about transactions needs to change.

So please look at these four kids, look at what they can do and what the team actually needs. Watch Hayward, Burks, and Favors run the break and think about how to maximize those abilities. Watch the guys run P&R’s, make cuts, and pass to each other and think about how to make sure you’re using those talents most effectively. Figure out how to find players who synergize, don’t look for players who just create unnecessary redundancies and logjams.

Change the question in every move from "Is this the best guy I can get?" to "Is this move the best fit for the team, a move that maximizes what the team will be able to achieve?"

But his tenure hasn’t been perfect. These two things would go a long way to helping our team as it moves forward.