Share All sharing options for: Kanter's Offense: More Than Meets the Eye [Breakdown]

Note: 9/10 people say big pictures are better than little pictures. Don't be that 1 loser-- click on the pictures for maximum awesomeness!

We’ve all heard the big criticism of Enes Kanter: "his game is too underdeveloped". And in a sense, this is very true. Getting his first exposure to basketball at the late age of 14, Kanter has very little competitive experience. He was ruled ineligible from the NCAA and was essentially removed from basketball scene for over a year. Though he kind of "disappeared" from the public eye, in reality he was still developing his game in the Kentucky Wildcat practice facilities. Disguised as an assistant coach, he would be spending the months of his NCAA ineligibility being coached by the Kentucky staff.

Too often I hear critics talking about how Kanter is way behind in his development because he "took 2 years off". Though this assumption has eased up a bit after this past season, Kanter’s surprising readiness has been mostly attributed to his "fast learning ability" during the 2011-12 season with the Jazz coaching staff. Not many people acknowledge or give credit to the years while he practiced with the Wildcats.

In this 3-part series, I will be looking at three different aspects of Enes Kanter’s game: offense, defense, and rebounding. I hope to debunk the common excuse of when Kanter makes a mistake; the one where we say "he took 2 years off and that’s why he is so underdeveloped coming into the NBA". Too often people forget the concept of "experience" isn’t just play-time; it’s also practice time. I am going to show how a lot of his surprising "NBA readiness" plays can be attributed to the Kentucky coaching staff, along with Kanter’s dedication to becoming great.

As a big man develops his post moves with a coach (as Kanter did in Kentucky), the first thing Coach will stress is the fundamentals. This includes staying under control throughout your move and attack with the entire body by using the hips. Once this technique is ingrained, it’s time to create some attack strategies. You always want to go towards the middle and feel how your opponent is playing you; soft or hard. If the player is resisting the contact and submitting to the contact (playing you soft), then you want to carefully crab dribble towards the hoop (avoiding a charge) and just pull up with a simple hook shot. If your opponent is playing you tough and bodying you up, you want to use quick, evasive moves to "play off" the contact: this includes a quick spin or drop step.

[Ed. Note: There used to be a picture of Enes vs. a Body pad here]

With two years confined in a practice facility, I have no doubt in my mind Kanter practiced these things tirelessly. He has spent thousands of hours battling the practice pads; a tool that the coaches use to adjust different amounts of defensive resistance. During these practices, Kanter would be mastering the fundamental techniques mentioned above; contact the pad with the entire body, feeling out the amount of contact, etc. With him not being able to play any competitive basketball, this is the only thing Kanter can turn to develop his game—and by looking at the film of his rookie year, it shows. As I looked at all of Kanter’s post-ups starting from the beginning of his first year, I saw that the fundamental aspect of his game is very solid

Every time Kanter posted up, he always beat down his defender by making contact with his entire body. In the above picture, I have outlined in red the region where Kanter is making contact. You see that he is not just using his upper body, he is banging into his man using his hips (which will naturally force his upper & lower body make contact). Another thing that is important to do while bodying up your defender is stay balanced. A lot of times players overuse their body by leaning to too far-this gives the defender an easy opportunity to "pull the chair" which causes the offensive player to lose balance and fall. 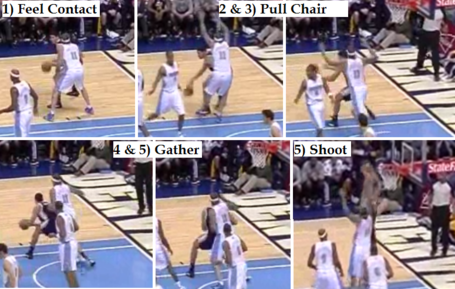 As you can see in the above still, that is exactly what Chris Anderson attempts on Enes Kanter. Anderson feels the heavy contact that Kanter is applying on him, so he concludes that all he needs to do is "pull the chair" and make Kanter look like an idiot. Once the Birdman tries that, Kanter just continues to plow his way into the middle. He didn’t fall down- which means he was using full-body contact while still staying balanced. That is an impressive skill that many bigs in the NBA don’t have (or willing to do)… and Kanter had it already in the second game of the season.

Now that we have seen that Kanter exhibits outstanding body contact and balance, let’s take a look at the other part of his game that can be developed in practice; reading the contact:

In both stills, you can see that Kanter’s defender is playing him soft (Koufos and Anderson are falling back when Kanter bumps them). When this happens, what a coach teaches you to do is punish the defender by getting towards the middle of the basket for an easy shot. Kanter does this in both situations; in the first still he went towards the middle and rose up over Koufos, in the second still he just went to the basket for an easy layup

In the above two stills, Kanter’s man is playing him hard and he does the correct thing by either quickly spinning or using pump fakes. Spinning works because the opponent is putting so much weight on you that just a simple weight shift in pressure will cause the opponent to lose position, leaving you wide open. Pump faking works well for Kanter because the opponent is so concerned about letting him deep into the paint. Kanter is so physically overwhelming that he virtually makes all his defenders look like they are playing him weak. Because of this, the defender is worried about stopping the "go middle hook shot". Kanter can use this to his advantage by faking the middle hook shot and doing a drop step towards the basket. This is illustrated in the below still:

We can now see that Kanter is pretty well developed in the fundamental sense of offense; he uses his body well, stays balanced, and does a good job in reading the contact of his defender. As you saw in all the stills above, Kanter is making the correct decision as to which type of move to use based on how much resistance the defender is putting up (soft/tough). So now it begs the question, why isn’t Kanter dominating the NBA offensively? Well unfortunately, it turns out the fundamentals aren’t the only aspects of a well polished offensive game. The other aspect is reactive. This means you play the game on the fly- make your move based on your opponent with the ability to change it in a split second. Kanter is able to make his move based on how his opponent plays him, but he has not yet learned to change in within a split-second. When he posts up, he runs his offense through a systematic scheme:

He predetermines what move he is going to make based on the contact-this causes his moves to look rehearsed. The reason I can tell he predetermines his move is by looking at his eyes throughout the post up. If you look at all the stills in this article, you will see that Kanters eyes are fixated on the ground and not necessarily at all the players. You can also tell by the way he is passing up open shots that become available to him. All he knows how to do now is play off the contact-he relies on contact to decide which move to make (which is why he passes up easy floaters to make contact with the defender). He is doing the correct type of move, but now he needs to develop the reactionary part of the offenses. Here is an illustrated example to help show what he is doing right now:

As you can see above, reading the contact will only narrow Kanter’s system down to one side—it won’t narrow it down enough to tell him what move to do. In the illustration, you can see in the second frame (the pump fake) Kanter is open for a jump shot. But instead of shooting the shot given by the defense, he continues with the "pump fake middle, dropstep" move because he already predetermined it. He is playing a rehearsive offense instead of reactive offense.

Another revealing sign of his lack of reactive offense is his passing game. Throughout the entire NBA season, Enes Kanter only had 2 assists from the post. TWO. This is because Kanter predetermines his moves (based off contact) and just goes through the motions. Once he feels that contact, he puts on the blinders and does his move despite what the defender does. As a result, he does not react to cutting or open teammates.

Unfortunately, the reactive part of offense (being able to narrow the system down to a specific move) can only be developed with actual competitive play, not practice alone. Reactive offense depends on reading how the defender is reacting to you throughout the entire move, and sadly a post-up practice pad can only simulate amount of contact, not a defender’s reaction. You need an actual defender during an actual game.

Wrap up- what was found

Kanter’s offense isn’t as behind as everyone thinks it is. There are two ways to developing your offense; during practice and during competitive games. The knock on Kanter is that he was removed from competitive basket for so long, so his offense game must have suffered. What people forget is that playing in games is just half of the development—practice time is the other half, and Kanter has that (and plenty of it). The abundance of practice time has really shown in Kanter’s game, especially in the sense of how he is using his body and reading the contact. Also, the lack of playtime has also been exposed in his offense with the way he isn’t reacting to the defender’s reactions and not seeing open teammates.

This should be good news to all of us, because play time only increases as time goes on. We already know that Kanter is fairly advanced with the lessons learned from practice. Now all he has to do is learn the lessons that arise from competitive playing time—and he has a good foundation to build those lessons on. As time goes on, he will start developing a reactive portion of his game, and combine that with the way he uses his body, watch out.