The Utah Jazz have a 27.4% chance of getting a pick (mid to late lotto) just because Golden State Warriors broke universal laws with how much tanking they did.

Shoutout to @Kyle11Kirkham of TheUtahJazzBlog.com for the quick youtube skills!

I've played a lot of D&D in my life, and I know that just because you have a three in four chance of success doesn't mean automatic success. More often than you'd want it ends up getting you that 1/4 chance of failure. Golden State will most likely retain their lotto pick (for this year), but you still gotta play the lotto.

A lotto that we've had some good luck with lately . . . 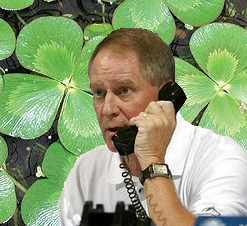 The Luck of The Irish!