The Everything is Wrong Edition- The Downbeat #763

Share All sharing options for: The Everything is Wrong Edition- The Downbeat #763

Well the basketball gods are stupid and they don't believe in karma. I guess we still have chances to obtain the pick in the next two years but you would think, you'd think the stupid Warriors would have had to pay for their titanic tank job. That was not the case I sat watching ESPN, my heart bounding and bam nothing good happened. So no draft talk that we know of unless KOC pulls off a trade or gasp buys a pick.

I am really sad that we didn't get to see this

Something else happened though that shocked no-one 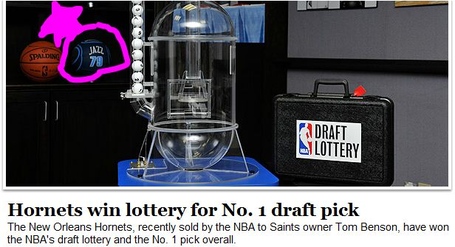 The caption says it all. I don't know why they have a Jazz jersey in the background we are the Jazz they are the Hornets, we are the Jazz.. For some reason even though we have had many players wear that style of jersey like DWill, AK, Memo etc, I always associate that blue road jersey with Jarron Collins.

Fans and players thought alike, they thought what everyone in the whole NBA universe was thinking:

So what now. I guess KOC gets to work his magic, try to get us a pick or do something to make our team more balanced. I came across this the other day and it made me laugh hard:

I think Kevin is a good GM, we're told he is one of the best in the league that he makes shrewd moves. I peronally believe he is getting better. You can read all his transactions here.

I never really thought about his body of work in this way though:

oh but we're in a small market what should we expect Kevin O' Connor to do?

Is it concerning to you that the Jazz have only been to the Conference Finals once in KOC's tenure with the team? Even in 2007 we had a lot of help with the Warriors upsetting the Mavericks. So is once really that great in 13 seasons?

Lucky for us there is no lockout and we do have Summer League this summer. The Jazz will be attending the Orlando Pro Summer League. It goes from July 9- July 13. The Orlando Magic released the details of the event yesterday.

Speaking of Orlando, lucky for us we don't have to deal with a superstar on the last year of his contract

I don't get why teams hold themselves hostage to these stars. I so miss however having that kind of impact player, I mean D-Will was just incredible hopefully Favors will turn into our superstar. Overall though isn't it so nice to not have to worry about what D-Will will be doing this summer?

This caught my attention because KSL is a very reputable news site.

Speaking of other wrongness related to Karl 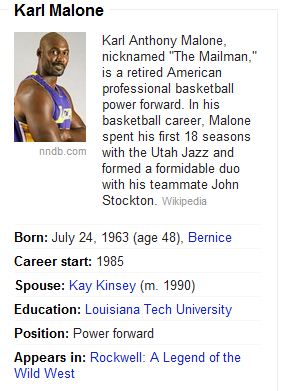 So Google has started having these summaries on the side of their page when you searched a famous person. WHY does it have Karl in a Laker's jersey, why why why. Karl was there one season, he was in Utah for 18, whatever.

Here is Derrick's his middle name is Bernard. Even just looking at his google summary gets me so freaking excited about him and the Jazz's future 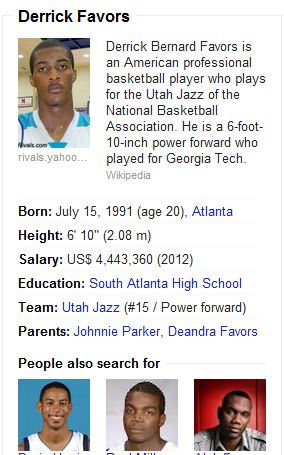 So now that we know we don't have the pick, what do you feel is the most important issue that the Jazz should address this summer?