Share All sharing options for: Making the All-NBA Team doesn't happen by accident

I'm insane, because I see the obvious problem with our team being that . . . well . . . our best players (Al Jefferson, Paul Millsap, and Devin Harris) just aren't good enough to carry a team in the playoffs. They all worked very hard and they are all super awesome people whom we love as fans of the team they all currently play for. But let's not confuse being likable with being good enough. Next season Paul and Devin will both be making second banana money (between $8m and 9m). That's fine. Al Jefferson is going to be making $15 million though, which is serious money in this new NBA. Especially for a small market team. As a result, Big Al needs to really improve on a number of problem points. Still, I think it's fair to say that all of our top guys are better suited to being 3rd or 4th best guys. Not 1st or 2nd best guys.

Who are the 1st or 2nd best guys, in a legit sense? Those would be the guys who make the All-NBA Teams. Not every team gets one, as we were blanked again. And not all teams that have one only have one. We know this first hand because we enjoyed the John Stockton / Karl Malone years. I think you can't seriously win in the league without at least two all-NBA guys. And we have none. I already went over how you get one . . . and I don't want to repeat myself. Instead I wanted to break down the All-NBA Team members. Are there common threads that we can see?

Well, the vast majority of them are first round draft picks, and the vast majority of those being lottery picks. The second thing, besides being drafted high, is that they are usually 'great' players at the NBA level. Duh. What makes you a great player? Production. What helps you produce? Confidence / being secure in your talents. How do you get this self-assurance? By having first hand experience at the NBA level. You feel confident in your ability to defend without fouling if you've done it a million times against NBA players. If you act nervous, and jumpy on defense the ref is going to call you for a foul - even if you didn't foul. Confidence is what makes you perform well. And if you are able to perform well you are a great player. If you are great, you get on the All-NBA Team. If you are on this team, you can help your team advance in the playoffs.

So, what's a great way to gain this first hand experience, this confidence in your game and your abilities? Oh, by getting playing time.

Some insiders may say folksy 'drill-baby drill' sayings that play well on the radio but have no actual quantitative value. I did my homework. There are three All-NBA teams a year: the 1st, 2nd, and 3rd team. Each team has 5 members -- so for each year there are 15 spots to be filled by worthy (or unworthy) players. So in the last 15 seasons there have been 225 spots. Because some players have been selected to more than just one All-NBA Team you're not going to get a list of 225 players. Instead these 225 spots have been held by a grand total of 71 different players.

And the data isn't just for their rookie seasons, we look at each of their first five seasons, and then also their cumulative five year totals.

It's a long list of players, and instead of typing it all out I'll just direct you to Basketball-Reference.com to see the full list. That's where I got the data from. I did my homework. And my homework checks out.

* Blake Griffin only has 2 of 5 years worth of data

** Derrick Rose, Kevin Love, and Russell Westbrook only have 4 of 5 years worth of data

All-NBA Team members pretty much all just ended up playing more as younger players -- and they banked that experience and confidence to become increasingly productive players. And when the going got tough, they'd make a withdrawl from their bank of experience - which helped them overcome obstacles. It's no doubt that these guys are All-NBA players, they played in a lot of games and played a lot of minutes. It's not rocket science. It's hands on training. No one learned how to ride a bike by watching other people ride a bike. No one learned how to perform open heart surgery like a boss by watching guys do it. If you want to be great, you gotta get on the floor. If you want your young guys to be great, you work your roster so they don't have anyone ahead of them.

Example: When the Lakers found out how good Kobe was they moved Eddie Jones pronto -- and his MPG went from 15.5 mpg to 26.0 mpg to 37.0 mpg. Oh, don't worry, it's exactly the same thing the Jazz did to Adrian Dantley when we found out how good Karl Malone was.

I did not set up a null hypothesis to disprove:

But it's not like I can test against a soggy over-dipped cookie. Especially since I never heard any numbers thrown out. But 29.2 mpg, 33.4 mpg, 35.9 mpg, 36.1 mpg, and 36.7 mpg seem to say one thing. And that's if one of the major factors for becoming an All-NBA player is consistent EARLY minutes (and don't give me that made up construct of meaningful minutes -- Michael Jordan and Dwyane Wade didn't have many early on but they lead their teams to rings) -- then we're doing our current young players wrong. We're not giving them the chance to prove if they can be All-NBA players. And if we drafted guys who don't deserve big mins then the fault isn't on the players, but on our front office for failing in their draft selection.

Well, you shouldn't also just keep young guys on the bench just because they're young. I already went over how John Stockton's production and efficiency in his ROOKIE and Soph year were just as good as in his fourth year. He could have started earlier. The only thing you accomplish by taking your lotto picks and putting them on the remedial development path is that you are screwing them over, making sure they have a less expensive first non-rookie contract -- and you also make your team lose more games while you kill yourself trying to find 27 mpg for Raja Bell and Josh Howard. Also, in this new NBA where players seem to pick who they play for, you also piss them off and make your own team look less attractive.

Our kids vs. the 225 last All-NBA Team selections:

How do our kids stack up, in terms of minutes? 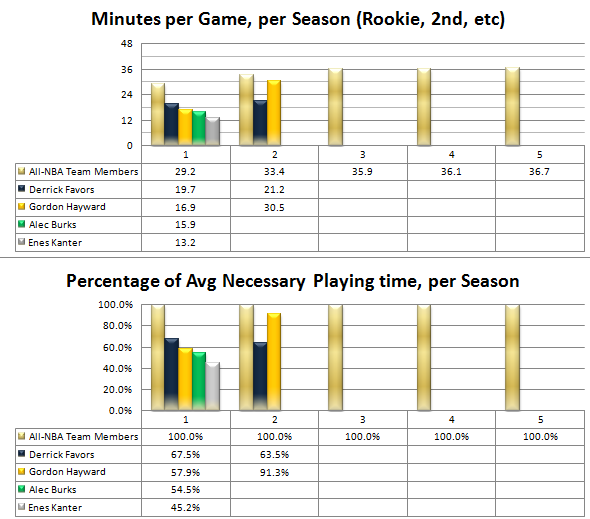 Well, I'm happy to report that Gordon Hayward made a big, necessary jump (thanks to the injuries to Raja Bell and Josh Howard). He played 91.3% of the minutes he should have been playing. Favors? only 63.5%. The other two guys, Alec Burks and Enes Kanter, are way below the grade. I can't expect Enes to play 33 mpg next year, but Alec needs to play at least 28 mpg (which puts him behind still). And yeah, Gordon and Favors need to both play 36+ mpg next year. And our front office should make the necessary moves to free up that time for them. Period.

Or else you know what'll happen? It won't be an accident if NONE of our lottery picks ever become All-NBA Team selections -- and that we'll never really advance in the playoffs to the heights that we advanced to before. It's more than just a minutes thing, it's a trust thing. I trust that our Front office drafted / traded for the right guys. It's up to the coach to trust in their abilities. And it's up to the players to get the minutes in order to bank that confidence so that they'll be high level performers.

These are my conclusions based upon being a cognitive behaviorist, and a mathematician who looked at the minutes numbers. Sure, some guys ended up playing little in their first 5 years who still made it to the All-NBA Team. But the other 68 of the 71 guys did not. They got the minutes. They got the experience. They got the banked confidence. And they performed well enough to help their team win games. And we saw our Top three guys were unable to do that in the playoffs.

I'm not hating. I love all the guys on the team not named Raja and Josh. I'm just pointing out facts. If you want to disagree with me do it based on facts. Our future can be brighter than our present if we see the gems we have and polish them.

That's a better analogy than cookies. Gems take time, you have to put the work in, and then they become both brilliant and priceless in rare cases. Lottery picks are gems. And we have four. 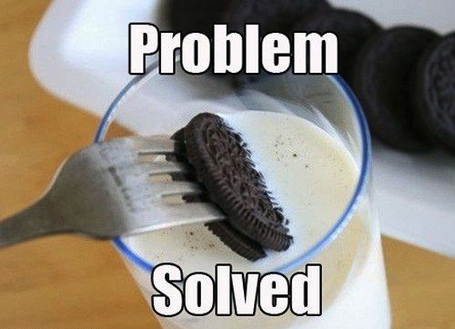 Fix the problem. Only an idiot doesn't know how to eat cookies w/o making them soggy. Don't be an idiot. Play the younger guys if you want them to be future All-NBA Team members, and thus, capable of helping our team advance deep in the playoffs.