Share All sharing options for: The So. Much. Koolaid. Edition - The Downbeat - #742

Agree/disagree with Utah Jazz Assistant Coach Scott Layden (who thought Tyrone Corbin should have been Coach of the Year):

Coach Corbin has got to get a lot of credit for [the young guys' play] because through injury, through different lineups, through playing a lot of young guys, giving guys experience. As you know, there's many coaches in this league that if they're faced with playing a young player or an older player, they're going to play the older player every time. But I thought that Coach Corbin right from the start, gave everyone on the roster, including our younger players, opportunity and a chance to succeed, and that was really the key so that at the end of the season, when we were faced with injuries or lineup changes, that those guys came in and were prepared to play. 'Cause if you sit a young player, and he sits for 40 games, and then you say, OK in the last 20 games go get 'em, he's not prepared. He's not gonna be ready. So in the case of a guy like Alec Burks, I thought he got some very valuable minutes early, and it gave him an opportunity to get his NBA legs under him, and now you see him go in the game, you're not surprised when he has great moments and really helps us win games. Enes Kanter, some coaches in the league would not put him in games, but here he is. He's in every game. Had that great game in L.A. when Al was out, and helped us win that game, which maybe that was a pivotal game. So I give Coach Ty a lot of credit there. A lot of coaches wouldn't have done that.

This came up in conversation yesterday (read from bottom). 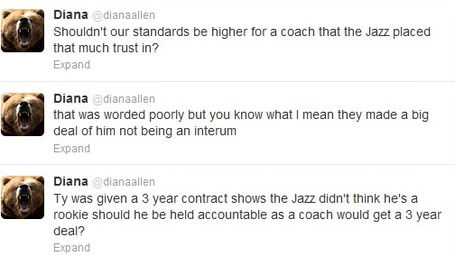 The Jazz were adamant about this when Corbin was named head coach: He was head coach, period. Not interim head coach. Despite being unproven (correct me if I'm wrong, but I don't think Corbin had ever been a lead assistant?), the Jazz gave him a three-year contract to show how un-interimy he was. Should we then be allowed to have higher expectations rather than looking for that one guy that picked the Jazz to finish last, comparing our record against that, and then saying Corbin overachieved?

[Ed. Note: This was an awesome picture of Derrick Favors throwing down a two handed jam]

...on the court in Game 3, and may he wrought wonders and still be allowed to stay on the court. Amen.

If you're already looking beyond this season, @DJJazzyJody's got you covered with a list of early entrants for the 2012 NBA Draft.

What, in your opinion, was the most important lesson to be learned from the Jazz coaches' perspective from Game 1 to Game 2, and do you feel this lesson was learned and adequate game-to-game adjustments were made?