Share All sharing options for: Out of the Frying Pan, Into the Off Season Fire - The Downbeat - #744

What to say about last night? This isn't the appropriate space for an entire recap of the game so here are a few thoughts.

The Last 6 minutes made the Whole Series Worth it

Locker Room Clean Out Day is one of my favorites of the year. There is always one player who says something interesting and for every other comment that is boring and typical, you can read a lot into it for fun. Today was no different. 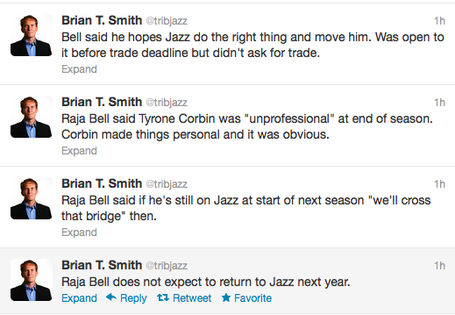 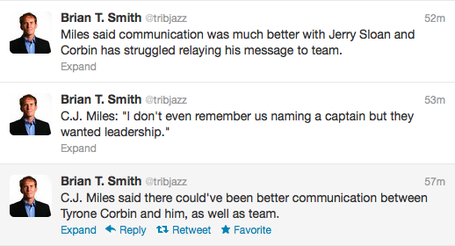 I think it's safe to say that the chances CJ Miles and Raja Bell return next season, just decreased a little bit. Also, no wonder, Tyrone Corbin thinks Josh Howard has been such a great locker room presence.

There was a lot of unintentional comedy on twitter yesterday from Utah Jazz media. Here was my favorite:

It really isn't important if the Jazz coaches really did or didn't have their bags packed. It was the symbolism of such a statement. That they believed. Coach Corbin? He's just going to wait and see. Because, after all, he can pack pretty quickly for a two day trip to San Antonio.

On top of that, did anyone else notice the PR push to overcome Al Jefferson's "defeated" comments? It was funny. "The coaches have their bags packed for San Antonio." "The players look more relaxed than I've ever seen them. Ready to go." "No Jazz player wants tonight to be the last of the season,etc, etc." I was half expecting this tweet to come through at some point.

"Jazz are so confident in Game 4 win, that they have already sent Paul Millsap, Al Jefferson and Devin Harris to San Antonio for Game 5."

There is no question that no matter what the Jazz do with Devin Harris, Al Jefferson, Paul Millsap, Josh Howard, Raja Bell, Demarre Carroll, CJ Miles, etc (see how crazy the offseason could be?) that the Jazz need to add 3 point shooters. That was never more evident than last night, when the Jazz went 0-13 from the 3 point line. The Jazz don't just need guys who can shoot from outside, or who are willing to take 3 point shots. We need 3 point specialists. We need guys who will not only make, but take 3 point shots.

Here are a few of the best 3 point shooters over the last few seasons:

The Jazz have to figure out a way to land one or two of these guys. No excuses.

It's the off season, so it's time to start thinking about what could happen. For me, the off season is almost as fun as the season, when I get to put on my GM hat and play fantasy basketball. Obviously, the moves I want to see made, don't get made and for the most part, thank goodness. But this is the perfect time to make a big trade. If I had to bet, I would guess that Paul Millsap and Al Jefferson return to the team and play the whole season in Utah next year, so don't get excited fans of that option.

But it's time to move one of them. If you can get a lottery pick for one of them, fantastic. If you can trade one of them for one of those better 3 point specialists I listed, great. But I don't think you can give Al Jefferson, Paul Millsap AND Derrick Favors the minutes that they deserve. Math doesn't allow it. On top of that, if you aren't going to extend both of their contracts and keep them here beyond next season, then you need to get something now for them. Letting them go isn't enough. Because you can replace them with Favors and Kanter starting next year.

Let the off season fun begin.

Also, here is an unrestricted free agent, I think would fit with Favors perfectly.