Share All sharing options for: The "Enes is an absolute beast" Edition - The Downbeat - #764

In case you missed it or aren't on Twitter, our liege lord Basketball John (@5kl) was on fire following the draft lottery: 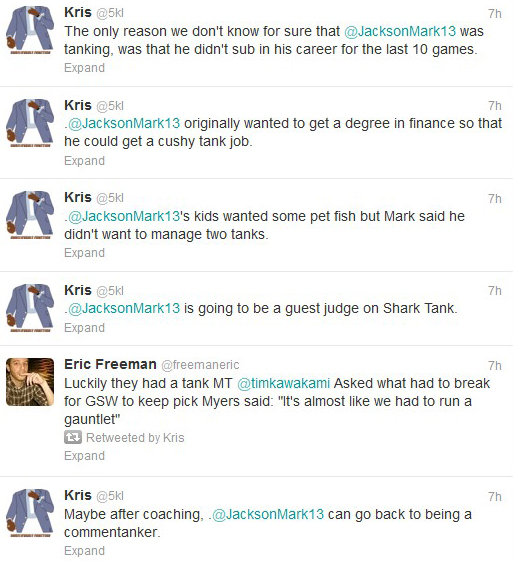 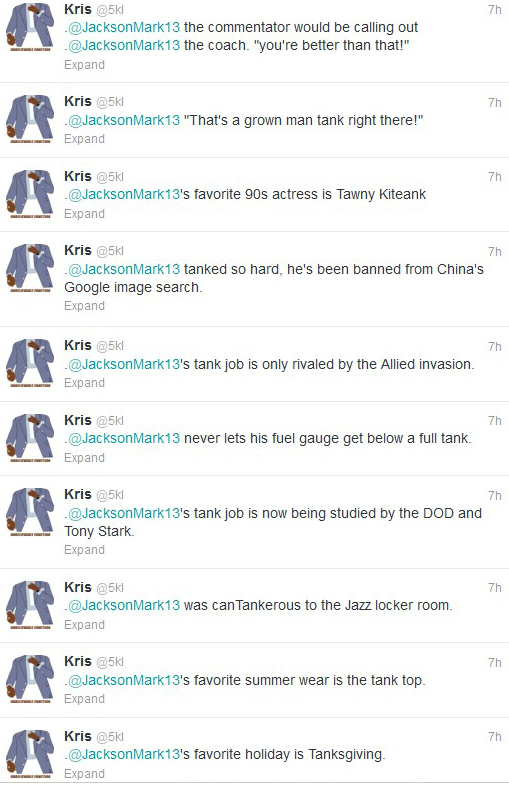 This was the fruit of BBJ's labor.

Tuesday: Just finished taking Utah Jazz big man Enes Kanter through his initial assessment at P3. Enes is an absolute beast, and at age 20 already one of the strongest NBA players that we have tested. (!!!!!!!!!!!*) His lower extremity bilateral force characteristics are very symmetrical in dynamic movement....Enes takes too long to reach peak force and needs to improve his hip extension, lower extremity power/acceleration and eccentric adaptation. He also reaches instead of drives when accelerating in all planes. We are very confident that we can improve these qualities, and enable Enes to become a much more explosive athlete on the basketball court. Wednesday: Busy day at P3! Another round of motion capture with NBA's top draft prospects, and initial motion capture with Utah Jazz players Enes Kanter and Alec Burks. Tracking sensors strategically placed on the body allow P3 sports scientists to quantify and identify each athletes' individual weakness in the long kinetic chain. The data we are collecting on these young athletes will serve them for years to come.

*Note: Bolding, italicizing, underlining, and the exclamation marks are editorializing by me. Fingers crossed that P3 will start posting videos soon. Even Particularly if it's just Enes running around a track, or up and down a hallway, or in place. Whatever, I'm not picky.

After hearing Jazz players/personnel/radio personalities talk ad nauseum about how the team overachieved because one sportswriter picked them to finish last in the league, I wonder how come no one affiliated with the team stepped forward with the analysis that the Jazz underachieved in the Playoffs... 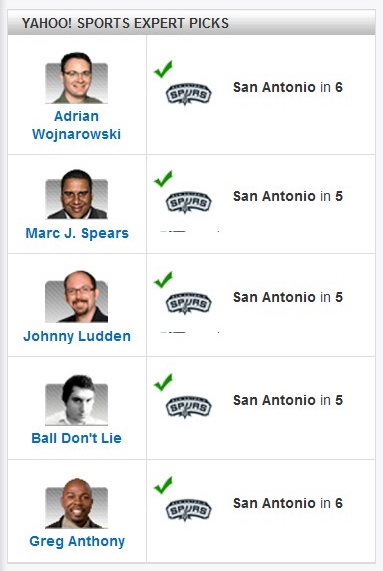 For those that have fretted for years and years about the Jazz's (dis)ability to attract free agents, fret no mo'. Randy Rigby on 1280:

A lot of that free agency is those players looking and saying, "Can I come and be that maybe last difference-maker on that team?" And so, athletes want to compete. Athletes want to help be a difference to help that team to win, and so to me, if you are a constant competitor, if you are a team that has a proven history of being able to compete, of being able to have a chance of getting to that title, players will look at you and say, "You know what? I'm willing to roll the dice with them."... I think we have a lot to offer, because the first thing that they're looking at is they want to come and be able to have a chance to win a title and be a difference-maker with a team. I think that's the most important thing that we can control and do...South Beach? For a lot of people, Park City and our skiing* and our winter and the four seasons, there's some pretty fascinating things that people enjoy outdoors and variety that we have to offer.

* Aren't Jazz players contractually forbidden from skiing? Rigby on Deron Williams and the Nets: "First and foremost, I'm glad that I'm not in their situation and I'm very impressed with the job that Kevin O'Connor did...and how we controlled our destiny for ourselves vs. leaving our destiny in Deron Wiliams' hands, and that's exactly what I hear being said in New Jersey. They're at the mercy of Deron and other elements happening to determine their future." Rigby also said that if the Jazz are winning and he starts watching the game and the Jazz then start losing, he superstitiously turns off his TV.