As Amar pointed out in his wonderful post, the Jazz seem to like to take the easy way out. They're all about the win now at all costs. And not win all like we're going to do everything we humanly can do to win a championship, its the win all to be in the playoffs.

The Jazz PR machine has lead us to believe in the past that as a small market team the Jazz cannot spend the money nor take the risks like larger market teams. We as Jazz fans should be grateful to even have a team (which we are) and that they have been competitive for 20+ years ( which of course we are).

I tend to think that the Jazz like to play the poor card when there is really no reason to do so. Yes they went over the cap but was that intentional?

I don't think they planned on Boozer taking the option his last year. Lets not forget that KOC while the Jazz were over the cap made moves to cut salary, moves that from a competitive perspective did not make the team better. We traded D-Will's buddy, a great crowd pleaser, team player, Ronnie Brewer, for a draft pick. (yes we used that pick to get Al) .

The Jazz also got rid of Eric Maynor to make up for giving Matt Harpring a contract he shouldn't have gotten in the first place. ( Matt should have gotten a contract but not as long or as much as he got). They had a solid core with DWill, AK, Boozer but didn't really tweak enough things to go over the top when they were so close.

Look at those years were we had two hall of famers, look at the players they had to play with. Players that helped them get to the playoffs (but really Stock, Malone and Sloan could have had any dleague scrub teammates and made the playoffs) There is no excuse when Jordan was "retired" that the Jazz shouldn't have gone all out to nab a ring.

The Millers would not end up in a cardboard box if they took a few risks now and again or if they had a few down years (which Amar has also pointed out that even in our 26 win year we were top 5 or close to that in attendance). Its funny to me because taking risks doesn't necessarily mean making poor financial or poor personnel decisions.

Why we don't have to worry about the Millers:

How large has LHM become? If the Jazz were based upon wheels and fenders instead of a basketball bouncing upon hardwood, the team would be only LHM's fourth-largest Toyota dealership in terms of revenue.

In LHM's diverse business flowchart, the flashy Jazz are just one strong branch on an ever-growing multibillion-dollar tree, and the team is protected and supported by the businesses it feeds. Miller's vision in full-bloom: 45 auto dealerships in seven states that are on track to sell about 65,000 vehicles this year; 73 sports merchandise stores in 14 states; six Megaplex Theatres with 84 screens in Utah, including one that opened Oct. 14 in Centerville.

I love the Millers, I am grateful that we have a team in Utah. I have spent a lot of my money on the Jazz and a lot of my time promoting and supporting their team. I believe all of us fans have done so. I don't think its wrong to say we want more than 11 playoff wins in five seasons. In fact I know I am not the only one that feels that we want more: 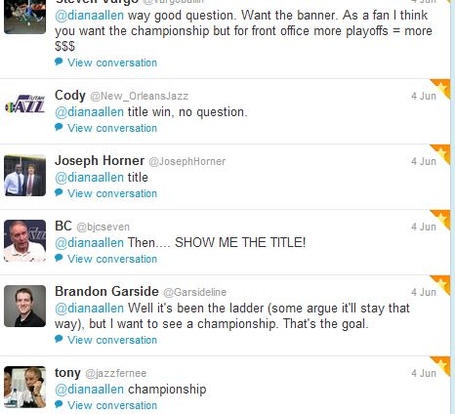 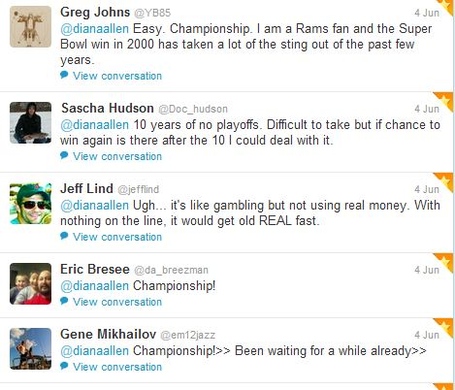 So not one single fan that responded took the playoffs for life option. I know I asked a pretty extreme question and that's not how the NBA works. It does show that fans would support "rebuilding" years.

I don't think we even need to take steps backwards I think we have the talent and with a few additions we could be really really good. We just need to use our players and our assets wisely.