The Jazz Love to Throw Parties Edition- The Downbeat #773

Share All sharing options for: The Jazz Love to Throw Parties Edition- The Downbeat #773

Last night the documentary "The Dream Team" aired. It was a delight to remember such a unique time in NBA history. The Dream Team will never be replicated. We will never be able to gather together players as talented that meant as much to the NBA as we did in 1992. The Dream Team meant a lot to me as a huge Jazz/NBA fan in my teens. I loved reading everything I could possibly could about the team, I'd read our local coverage in the Deseret News and the Trib I'd also buy any magazine that had any kind of story on the team. It meant so much to me that John Stockton and Karl Malone were on the team. Yucca had some great tweets about what made the Dream Team amazing and special: 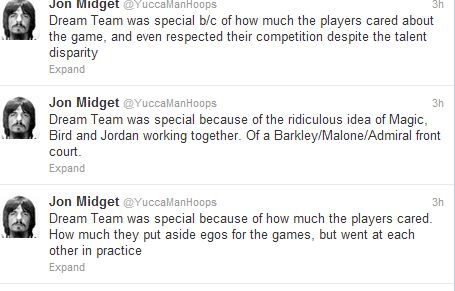 I loved seeing the footage of the scrimmages, I love that they had that clip that we all know so well with John and I love that they ended with Karl Malone. I feel the documentary was well done. I didn't learn anything new but that's OK I am sure the younger generation of fans did and hopefully some of the current players did also.

Seeing the competitive nature of those special players made me grateful that as Jazz fans we were spoiled that we had not one but two of those players for almost 20 years. They set the foundation for the stability that we have enjoyed for so long. Jerry Sloan was also a huge part of that stability for me. I knew that as long as Jerry was part of the team we would see success.

I remember hearing year after year others complaining about Jerry and how the team should fire him because the Jazz failed in the playoffs (again). In the latter years of Jerry's career with the Jazz , fans were vocal on forums that the game had passed him by. It was time to get a new coach. I always wondered who would replace Jerry that the Jazz could realistically get that was a better coach. I am so grateful that Larry never listened to those fans.

Jerry is one of the three finalist for the Bobcats head coaching position. If Jerry leads the Bobcats to a .500 record will he win COY? If he does will it hurt that he won it but not with the Jazz?

The NBA draft is two weeks away. The Jazz are having a draft party. I love how the Jazz organization is always making fans feel a part of the team. That something like a uniform change or a 2nd round pick is a cause for a get together which usually includes free cokes and hot dogs, sometimes Jazz vouchers or Bees tickets. The Jazz are always giving to us fans. One of my favorite free events held by LHM, is the Christmas sing-a-long at the ESA. I was fortunate to go to the last one that Larry attended. I don't think at the time any of us fans knew how bad Larry's health was. Larry spoke of community, it gave me chills. I came away feeling grateful that our team was owned by such a remarkable person.

I love how the Jazz are owned by a family, not a group of people or a cooperation, it feels a little more safe that way.

Going back to the draft, there were rumors yesterday taken from a misinterpreted quote from KOC that the Jazz were not interested in trading into the 1st round.

O'Connor downplayed the possibility of the Jazz making a trade to get into the first round: "Everybody is going to be asking for the moon and the stars."

I don't have any kind of feelings of whether the Jazz will make a move to get a 1st rounder, what do you all think will happen? Who would you be willing to give up for top 10 pick, what would it take to get a mid-1st round pick?

This is old news but I don't remember seeing it discussed on here. Josh Howard is rumored to be interested in signing with the Warriors. It is just a rumor (his BFF said on twitter the rumors are not true). If Howard does sign with the Warriors and not with the Jazz. We will need another SF. Who is available that you would like to see on the Jazz.

Josh is busy this weekend he has a skills camp for kids and a celebrity basketball game in Dallas. I always like to see what the players do in the summer. It seems like our tweeting Jazz players have been pretty quiet so far this off season. I miss the kind of tweets we used to get from D-Will. I love when players give us glimpses of their everyday lives.

Lets say we could bring back any former Jazz player that is currently playing in the NBA (or Europe) which player would you chose. Lets say we do have to take into account what kind of salary they would demand.