"It's good to let you use me, cause I've used you so many times before." - the Mother Hips

Besides just really liking this song and wanting to share it with you fellow Jazz junkies, the above quote made me think of the Jazz's approach to free agency last summer. The two new free agents the Jazz found last offseason, were Josh Howard and Jamaal Tinsley. Both of these guys were veterans who were once good players in the league who needed a chance to show the world they still "had it." The Jazz, obviously a little worried about having too much youth on the roster, wanted a couple of guys who could play some minutes and show the kids the ropes. It was good for the Jazz and Howard and Tinsley to "use each other." Raja Bell and Francisco Elson were similar off season targets the year previous.

Theoretically it is a good idea. Scratching another back for a back scratch in return is a great trade off, especially for guys like me with really short arms. I do wonder how the Jazz feel about how that game plan has worked out. And more importantly, will they use that same tactic this off season? How fun would it be in 30 days to be debating if Tony Battie or Andres Nocioni have anything left in their tanks after they sign contracts with the Jazz?

I'm actually a big advocate of surrounding rising stars with veterans. I just think you have to be careful about which veterans you are surrounding them with. I think this is what Oklahoma City got right just as much as they did with their draft picks. They surrounded their stars with great veterans that would only further the development. Hard working vets, like Earl Watson, Nenad Krstic, or Kurt Thomas who didn't need to get minutes or shots or stats were brought in. Guys like Wally Szczerbiak, Delonte West, and Chris Wilcox were shipped out. Character guys like Shaun Livingston and Etan Thomas came and spent some time with the team. But there were no egos. You know who epitomizes the idea of the hard working veteran who is glad to do his job, help the team win and go home? Its the only current Thunder player who also played for the Supersonics other than Kevin Durant: Nick Collison. Collison is the guy who does the little things. He's the +/- king. He helps the team win, even without doing anything of value in the boxscore. He has averaged just over 5 field goal attempts a game for his career. And now he is playing 20-25 minutes a night for a championship-type team. My opinion is that the Jazz need more Nick Collisons on the roster to help the Haywards, Burks and Favorses of the Jazz grow into winners. Someone who will play the game and act like professionals the right way, without giving any pretense of needing glory, rank or the ball.

Any Nick Collison type players available that you can think of?

I think there is one thing that the Jazz's off season targets will have in common: minimum contracts. I obviously don't know the Jazz's full gameplan for the next 3-5 seasons, but I do know that they appreciate having financial flexibility moving forward. We all know by now that the Jazz only have 4 players under any kind of contractual obligation past this next season: Favors, Hayward, Burks and Kanter. The Jazz are leaving themselves financial flexibility to be able to offer these four youngsters the contracts they will hopefully deserve, but it also means that they will be very judicious in any long term deals they give out. So if they do sign free agents, the contracts will most likely be shorter and cheaper to minimize the risk or the opportunity for a young gun to bolt. That is why I am so intrigued by these workouts the Jazz have and will have to look at draft prospects. Second round picks don't have guaranteed contracts just by being selected like 1st round picks do. But if the Jazz want to keep the player they select at #47, they could sign that player to a rookie minimum, around $500,000 for the year. And if you fill your last one or two roster spots with similar contracts for, let's say undrafted rookies, you can save some pennies. Obviously the Jazz can't field a very competitive team with a bunch of second round and undrafted talents, but it is a perfect place to find players 9-12 on your team.

Of the six guys the Jazz brought in for a workout on Saturday, I am most interested in Robbie Hummel. He would probably have to play the stretch 4 in the NBA and he's a bit undersized, but he could become a Ryan Anderson type basketball player. He's a good shooter for his size, but mostly he has a winning mentality and vibe. He's a basketball player that makes his team better. He's a winner. I just believe he will contribute in the NBA for someone if given the chance. In fact, I will make him my official prediction to the Jazz at 47.

Speaking of the 47th pick that we own, who would you say is the best NBA player to ever be picked at that spot? You can find the whole list of those players from the last 30 years here.

In my mind, the Jazz drafted 2 of the 3 best players on that list in Paul Millsap and Mo Williams. You can make a good case that Vernon Maxwell is the best player on that list, but Millsap has some things to prove in the remainder of his career. The Jazz will hope to select the third of 4 best number 47s ever next week. 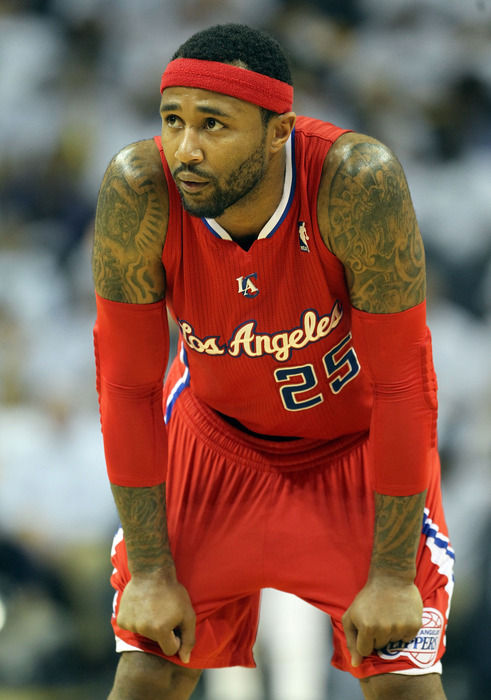 Photo courtesy of Presswire: Number 47 has been good to the Jazz in more ways than one.

Last week we had a spirited discussion on Al Jefferson and his good points and his weaknesses and trying to objectively put those in perspective. Everyone has some opinion on Al Jefferson and his role/future with the team. Lots of people love him, some would trade him from the team for nothing and many are somewhere in between. Most of the writers of this blog aren't big Al Jefferson the player fans and we write about him often and to be fair, we probably don't talk about his good points enough. But it's been asked once or twice why we don't talk about the weaknesses of other players on the team as often. Why does the majority of the criticism go towards, Devin Harris, Al Jefferson, Raja Bell, and Josh Howard? Why don't Jazz fans complain about Paul Millsap's shortcomings? He certainly has them. Every Jazz player has them. And on top of that, these questions aren't questions just for the staff of slcdunk. It's true of the Jazz fanbase, generally speaking. Jazz fans will defend Millsap or Favors, or Hayward, but many many Jazz fans are very critical of Al Jefferson. It's also not unique of Jazz fans. Every team's fanbase has a couple of players they like to roast and blame and most fans would rather see player x have more of player y's minutes. It's true of every team.

I've decided that there are three major reasons why Jazz fans turn on, or are more critical of a Jazz player.

1) The player gives off any indication or any inkling that they don't like playing for the Jazz or being in Utah.

2) The player doesn't appear to give a full effort, especially on the defensive end

3) The player gets paid more than he produces

Think about any Jazz player you haven't cared for and see if they meet some of these criteria. Carlos Boozer probably fit all three, which is why most Jazz fans were so glad to see him go. Raja Bell fits one and three now. Al Jefferson certainly wants to be here and you can't question his effort. You can question his ability to defend, but not his effort. But I would guess that most Jazz fans that would like to see Al go, have at least some distaste for his large hit to the salary cap.

The other thing I was considering is that Jazz fans love to see effort and for whatever reason effort is placed primarily on the defensive end. If you are a good defender, or if you are diving for loose balls it's a matter of effort and not skill. And then the opposite is true for offensive players. Offense is primarily a skill and takes less effort. I think we take this too far sometimes and often overly criticize our team or certain players for a lack of effort or a lack of passion, when it's really just a lack of skill and there isn't much that can be done about it. But I believe that offense and defense both take an equal measure of effort and skill, we just tend to put emphasis of skill and effort with one or the other. But Jazz fans, I believe, will always defend a guy like Derrick Favors and roast a guy like Devin Harris or Al Jefferson, because Favors plays defense and Jefferson and Harris are better at offense. Each player just has a different skill set, even if they all use the same effort.

Guys like Favors, Hayward, Burks, Kanter and Millsap are free from criticism because none of them meet any of the three criteria I mentioned. I imagine that if Millsap did an interview tomorrow and said, "I don't like Utah, I don't want to be a Jazz man forever", then the fanbase would turn on him overnight and he would be a large target for criticism.

And let's just hope that none of the fantastic four get the fanbase's derision due to being overpaid.