I am a diehard Utah Jazz fan, and have been since age four. Most pictures of me in elementary school (and middle school, and high school, and college, and probably law school too) feature at least one piece of Jazz apparel. I've been to more games than I can count, bought more jerseys than I can count, and basically derive my entire internet identity from my devotion to an obscure Jazz role player from the 90s. I've spent countless hours making, uh, let's call them unique Jazz highlight videos. I've followed the Jazz from Tucson, Arizona, and Washington, D.C. I've never left a game early, but I have left important family functions early to watch games. I've driven to Philadelphia and Phoenix to attend Jazz road games. Every time I watch a team win a championship, in any sport, my first thought is how great it will feel when the Jazz finally get to do that themselves. My life revolves around this team, perhaps much more than it should.

And I am a woman.

This fact hardly makes me unique. There are hundreds of dedicated female Jazz fans, on SLC Dunk, on Twitter, and filling the seats at EnergySolutions Arena every night. [Many of them, you probably know well: dianaallen, moni, and SurlyMae. Many others (@_alexisholt, @Shan_801, @Jazzbug20, @vegawriters, @fingersone, @JazzPatty, @jazzyvandalute, @lauremonoto, etc.) you should get to know well, if you don't already.] Unfortunately, certain local sports radio personalities don't seem to think we matter. Earlier today, Spencer Checkets and Scott Garrard both made comments dismissing the importance of female sports fans generally, including female Jazz fans.

It was an innocuous tweet, and an interesting question. (I'm not a parent yet, but my parents took a hands-off approach with me. Thankfully, I found the light of the Utah Jazz all on my own. Good kids will do that.)

But apparently, once the discussion began, it moved in a slightly different (and much more offensive) direction. Via @dianaallen: 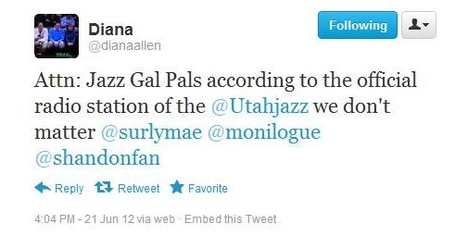 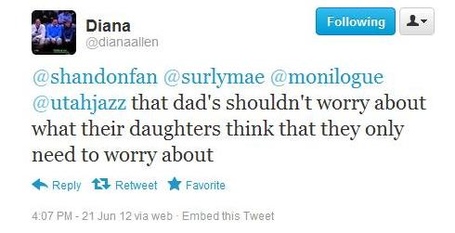 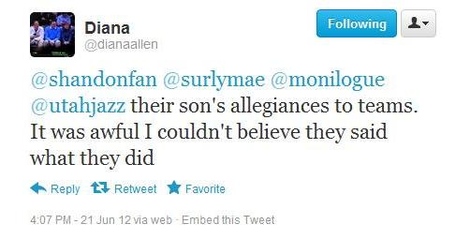 In response to the question, "Who said that?," Diana relayed that it was Spencer Checketts, with Scotty (Scott Garrard) calling in to agree, and Gordon Monson fighting against it.

(Note: Kudos to Gordon Monson for apparently defending female fans, but it makes you wonder: if Gordon Monson is the voice of reason, just how far off the reservation have you strayed?)

Look, I know female sports fans are in the minority. But that fact doesn't mean that those of use who are sports fans don't matter. It doesn't mean you get to talk down to us, or marginalize us, or claim we don't know anything or don't care about our teams.

Diana is one of the most well-respected fans and Jazz authorities out there. She has covered the Jazz for the Daily Herald and blogged about them for years both here and at UJ360. In fact, her coverage and dedication have been so impressive, Greg Miller personally invited her to sit courtside with him at a Jazz game this past season.

Moni has been following the Jazz religiously from an entirely different continent since the time of Stockton and Malone. Before the days of the internet and live streams, following any NBA team from abroad was next to impossible, but she did it. And now, she's our go-to for Jazz .gifs, memes, interview transcriptions, funny photos, offseason coverage, Mark Jackson-hating, and everything else that we don't get from the "mainstream" Jazz media. (If you aren't already visiting http://jazzfanatical.wordpress.com/ daily -- or hourly -- fix that, pronto.)

Surly only started following the Jazz a few years ago, but she's already become one of the most knowledge, passionate, and hilarious Jazz fans out there. Her enthusiasm for, and fierce pride in, our team is difficult to top. (Not to mention that she's hands down the best Jazz drunk tweeter.)

I could go on and on about my fellow female Jazz fans, many of whom have become great friends of mine even though we've only met a couple of times (if at all). And what's great is that, for the most part, we've been accepted into the community of Jazz fans as full and equal members. Very rarely does our gender even come up when we're engaged in discussions about the Jazz. And that's as it should be -- our thoughts are no less insightful, our contributions no less meaningful, our opinions no less valuable, and our fandom no less important simply because we are women.

The fine Jazz fans on SLC Dunk and Twitter have never made me feel "less than" because I'm a woman, and for that I sincerely thank you. It's one of the things I love most about this community -- it doesn't matter who you are, where you are, how old you are, or what gender you are: as long as you love the Jazz and have interesting things to say about them, you're welcome here.

I wish we could always say the same about "the official radio station of the Utah Jazz."