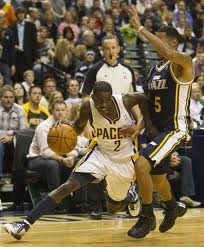 Guess who had their best game of the year against us? (hint: see picture above)

This past year we were blown away by point guards. Silly, D-League call-ups were burning us almost every night. With the only real excusable case being Jeremy Lin, we need to find a solution for our point guard defense. While good rotations and not over-helping can usually work as a good band aid to a poor defender at the point guard position (unless Al shows halfway on a screen while Devin doesn’t fight through a screen, Sap rotates to help at the same time Favors does while Hayward sags off his man in an effort to help as well), the real solution is to just have good man-to-man defense at every position. Why make a first aid station at the bottom of a cliff to patch up people that fall when you can put a fence at the top to keep them from falling?

Analogies aside, we’ll look at how bad we got burnt by point guards this year, ways we can stop them from killing us, and a lol cat after the jump. 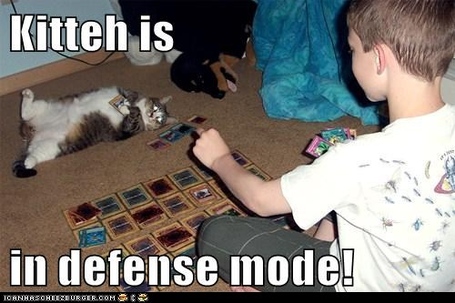 82games.com keeps track of scoring by position for each team as a whole. They also keep track of the same stats by position for the opponent. By simply finding the difference between these stats, they come up with our effective production at each position. I've included all three things on the table. To make things easy to read, I highlighted the things that are bad in red. I bet you can’t guess where most of the red is (insert sarcastic face here). 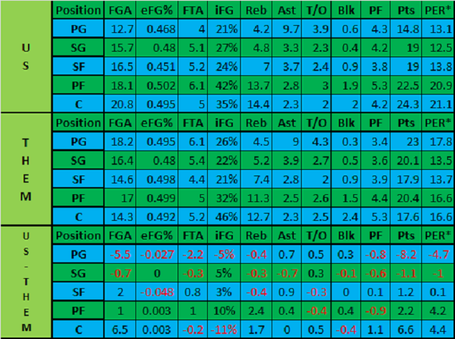 So obviously point guards were burning us. We let them shoot more, shoot better, shoot more inside, rebound better, foul less, score more, and just overall beat us to a pulp. At least at shooting guard we held our ground (though if some players wouldn’t have played at all, we might have had positive stats in the "us minus them" category). We were definitely doing well inside from this stats perspective. Now let’s see exactly what point guards were getting burned. I assembled the same stats as above, but for each of our point guards. Once again, the bad stuff is red. 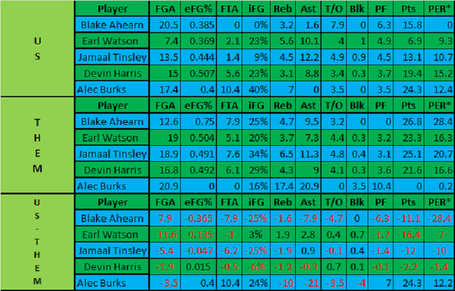 Whoa! Poor Blake Ahearn! The small sample size does not like him. That aside, there is a lot to dissect from that chart. The only player that did a good job of stopping the non-scoring stats was Earl, especially since he got quite a few of these himself (remember, this is a table of differences, not totals). He also did a good job at stopping dribble penetration according to the numbers. Everything else was sad and terrible for everyone, especially the PER difference for Tinsley. Alec looks ok from this view, but he has the same sample size problem that Ahearn has.

So, what needs to happen? Well, #1 we need our point guards to actually score, get to the line, not foul, get inside the paint, and shoot better. What it also means is that we need them to stop other point guards from doing the same. Since getting into the paint and stopping other point guards from getting there would fix all of these stats, let’s take a mathematical look at how this works. (warning, lots of math in the next 2 paragraphs; skip these two if you wish)

To make it easier to stop dribble penetration, playing further off of your man is a heck of a lot easier than closer. How far off can somebody play though while still being close enough to contest a jump shot? For this mathematical question we’ll say that contesting a jump shot would be equivalent to still being able block the shot if all is timed correctly. For simplicity’s sake, we’ll say that the two players jump the same height since one is usually caught slightly off guard for his jump while the shooter never jumps to his max height when shooting. This means we can just ignore jumping for the most part. This means the only two important numbers are #1 the release point of the shooter (we will assume this is at his head height with shoes on) and #2 the standing reach of the defender. Lastly, we need to know the release angle. 45 degrees seems to be a good angle and would generally fit what most people use as an angle.

To construct this mathematically using 2 points and the release angle, I used the equation y=ax^2+bx+c and its derivative y’=2ax+b. The points were (0, height of shooter), (23.75, 10), and for the derivative (0, 1). After solving the equation of the parabola for a and b, I graphed it and used the table function to find out where his standing reach would still be able to block the ball. This point would then be the maximum distance that he could play off of his shooter. Below is a simple picture in paint of exactly what I did with the labeled points. 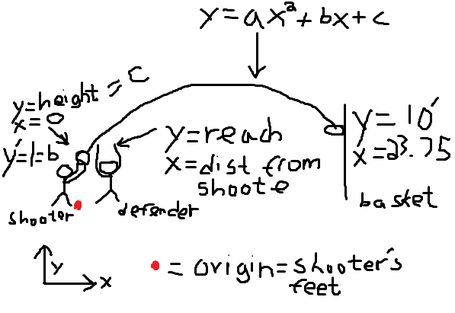 So, how much space can our players give an average opposing point guard? Well, here‘s the data.

Wholly wowsers Batman! Burks has the wingspan of an albatross! Because of that, he can play way off of tiny point guards. To make things even better for him, he has the speed of a point guard himself. He’s easily the fastest player on our team (sorry Devin, but you are getting older). Poor Earl and Tinsley have to play a LOT closer to their man than Burks. How much farther back can Burks guard? Well, about 26.09% farther back actually. Hayward can sag off his man almost as much as Burks coming in 1" closer than Alec can in most instances (mathematically speaking).

Granted there is a lot more to defense than just what I presented. There is a lot of timing, thought, speed, and jumping involved that I simply can’t involve in a calculation. However, the data goes to show in a rough sense that shooting guard sized players can do a lot better job at defending point guards so long as they possess the same speed and jumping ability (which is generally true if you compare the average draft statistics for point guards and shooting guards).

So what exactly am I trying to get at? Well, I’m hinting to what I wanted to see all year long but never really got the chance: Burks-Hayward backcourt. There are tons of questions looming over what this combination could do offensively (no 3-pt shooting, not enough playmaking in the half court, soggy cookies from over-dunking in the milk, and lots of turnovers) but the defensive implications are great. Sure, as stands, we could use our shooting guard (Burks or Hayward) to defend the opposing point guard. Heck, if we had Hayward at the 3, we could use either of them to guard the opposing point guard. The trouble is, what if the opposing shooting guard and point guard were killing us? We’d have to put Devin guarding a 3 which would not work at all.

The next question is, what would happen if opposing point guards had to defend Burks. Well, they would have to be within 1’ 8" of him like Earl, Devin, and Tinsley have to do when guarding tall shooting guards making it really easy for him to drive to the hoop. Guess what Burks likes to do? It’s not jump shooting for sure. I hope Ty gives it a try next year because it has potential. The struggles may exist, but we don’t know if they’ll outweigh the benefits of a tall back court. Ty, make it happen please!