Moneyball, Josh Howard, and the Future

Share All sharing options for: Moneyball, Josh Howard, and the Future

Note: This is a little reprieve from draft talk. But not completely. It's a round-about way of thinking about what kind of players ought to be placed around our Fantastic Four. Which, of course, is fairly pertinent to a #47 pick. You're looking at a guy who can hopefully fill a small role.

Last year, Locke called it "Moneyball" when the Jazz signed Josh Howard and Jamaal Tinsley. He said it was a continuation of the same philosophy that brought Raja Bell to the Jazz the year before.

The concept, of course, is pretty simple. It was based on three simple truths about the team:

And so the Jazz the Jazz went after some players with a very specific profile: a) older players, but not ancient b) players whose demand were diminished by recent strings of injuries and/or attitude issues, and c) players who legitimately played at a reasonably good later a few years earlier.

The Jazz went after these players because if they could recapture just a bit of their production, the Jazz would end up with a good player for cheap.

And they did this because it happens occasionally enough that everyone dreams of it happening for them.

However, I went a little crazy about this. Not just because I didn't like the signings (though I certainly didn't), but because Locke called them Moneyball moves. Moneyball has absolutely nothing to do with signing declining vets and hoping they have a good year.

More after the jump.

Moneyball in Baseball ... Understanding its Goals and Means

Moneyball was coined to summarize how Billy Beane built the Oakland A's in the early 2000's. The basics are this:

I hope the difference between Beane's strategy and the Raja/Josh/Jamaal signings is obvious.

Bean never went after cheap players with nothing but a hope that he magically played like he did five years ago. He went after players with well-established skill sets. Guys who he could count on to produce because the guy had been producing consistently well year after year. But because the baseball establishment happened to not realize how much the skills helped teams win, Beane could get them cheaper than they deserved.

Basically, he could watch the Yankees sign a guy for $6 million—a guy who seemed good at first glance—while he signed a guy for $1 million—a guy who Beane absolutely knew would help a team win more than that $6 million player. And I don't speak of "knew", as in a gut feeling. I mean "knew" as in a) so-and-so had a dependably high on base percentage, b) on base percentage is a statistically confirmed contributor to team wins, and c) the guy needed to produce exactly as he had established over the previous few years (not suddenly make some sort of huge leap).

This is the basics of true Moneyball: figure out what type of players are undervalued, and then build your team with them.

Why the A's never became a superpower

This is crucial to understanding anything of this Moneyball philosophy.

As these pitchers ended their rookie contracts, the A's refused to make any move to keep them (again, the owners are really cheap). And when they all left the A's, the team became mediocre.

At the same time, baseball began a philosophical shift. All those things the A's valued and everyone else ignored ... well the other teams stopped ignoring them. Those undervalued skills and undervalued players started becoming properly valued, and Oakland (because the owners are obscenely cheap) could not get them or retain them anymore.

Application for the Utah Jazz 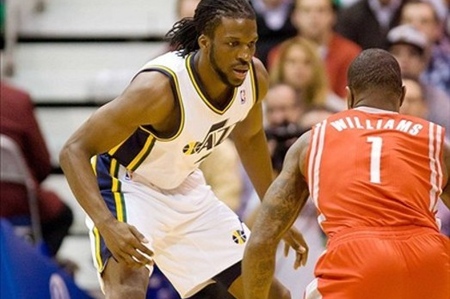 And so now we come back to basketball. These are the major lessons I learn from looking at the A's and Moneyball:

So there we have it. I'm going to move beyond Beane's Moneyball (since he was hampered by cheap owners), and assume you have a team that is actually interested in winning and keeping its stars. So, my definition:

If the Fantastic Four reach their potential, we're looking at $50-60 million to keep them with the team. Unless the team is willing to go crazy into luxury tax level (and they aren't), they will need to be very, very smart about how they fill out the roster. They will have to play Moneyball successfully.

And so, the ultimate scenario and question ...Let's pretend our Core Four are in their prime:

What are the Moneyball type of players you think can surround them effectively. What Moneyball skills could best help them? Remember we're not looking at just good role players (Nicholas Batum, for example. Because Nicholas Batum is very highly valued and will cost a lot). But we're looking for specifically undervalued types of players and skills ... enabling our team to get guys for less money than they are actually worth.

Three things I can think of are these:

Anyway. Those are my Moneyball ideas. What are yours?