Basketball Reference has this great 2012 NBA Draft Preview, which tells us the best players to go at each draft slot, as well as the expected value of that pick in terms of career win shares. Kevin O' Connor has the reputation of overachieving on 2nd round picks, and underachieving on 1st round picks, so I thought it would be interesting to look at the sum total of how he's drafted to see if it is greater or less than expected value.

Win Shares are a convenient way to put the total value of a player into one number: wins. It tries to add up all of the box score statistics, weigh them for pace, and then measure how many wins that player has approximately contributed. This, in many cases, is a terrible idea because it takes away all of the substance behind a player. Kosta Koufos has a 4.3 CWS number, whereas Kirk Snyder has a 4.5 CWS. To say that they are roughly equivalent players takes out all of the fun in basketball, but is still useful because of the amount of numbers we're generating. Plus, this is more of a cursory look at the topic, not a serious investigation, due to a number of issues.

Still, let's look at the table. The upcoming table shows every player the Jazz have drafted, his career number of Win Shares, and the number expected by the Basketball Reference formula.

In the end, the players have gotten 242.4 total Win Shares, while the Table says that we should be able to expect 448.5 Win Shares. Now is this wildly unfair? Yes, because the players he's drafted haven't finished their careers. Let's consider, then, the players who still have an ability to post more Win Shares:

I'm going to pause on predicting Hayward, Evans, Burks, and Kanter's WS, because, well, we have no idea what's going to happen with them. If they continue to improve, they can put up big WS numbers. We just don't know if they will.

So, from my completely unscientific guesses, those players can add about 190 WS to KOCs Win Share total. I suspect that's optimistic because, well, stuff happens. Look at how Memo fell off, for example. So many things can go wrong for a player.

Remember that KOC is currently sitting at 242.4 WS, so adding 190 to his total gets him to within 16 of his expected total of 448.5. I would expect the foursome of Hayward, Evans, Burks and Kanter to reach that easily.

What have we learned? That KOC, while not being a stellar drafter, is pretty average overall. Over a large number of drafts, and with some really unscientifc and sketchy estimates that can definitely be questioned, his WS total approximately equals what you would expect a GM to get in that time. Neat.

I told my dad that I would dunk on him one day. His response was "Son, I have 6 fouls and I know how to use them."

Which is a pretty awesome thing for Ty Corbin to say. It also happens to perfectly wrap up the Jazz' defensive approach at times: foul to prevent the easy bucket. And then sometimes foul other times too. 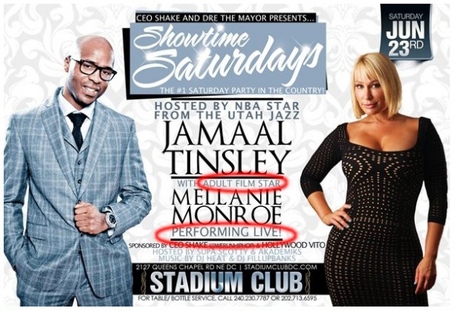 I don't even pretend to know what this would be like. Would people crowd to Jamaal Tinsley or Mellanie Monroe? It's hosted by Supa Scotty and Akademiks, are those people? Basically, I'm confused about the roles here. Also, is Tinsley really a big enough star to get top billing like this? Does Sundiata Gaines get this sort of thing happen to him? Has anyone actually gone to one of these? Did I just reveal that I'm actually not that cool of a person? Probably.

Each week in this #4 space, I've been extending a question to you, the readers, about some non-basketball Jazz question. Arena names, team slogans, and merchandise have been the topics of discussion.

This week, I speak to you about the Jazz intro song. For years, the Jazz came out to Sirius, by The Alan Parsons Project. Indeed, this still happened as recently as 2008:

Then, we changed around a lot. I know it had gotten some criticism from people for being the same as the Bulls, who probably, admittedly, did invent using that song. By the 2010 Playoffs, we were using this:

Which is okay, I guess.

This season, we did something weird. We seemed to play one song during "unimportant games":

And one during important games, First Of The Year - Equinox - by Skrillex (which, by the way, is a really weird choice, but IMO works surprisingly well, with the piano/keyboard intro).

I especially loved what we did above, because it was the first game of the year: put the starting lineup at center court, and spotlight them one at a time. It was unlike anything I'd seen before, and I thought ended up being a really cool effect. It may lose its fun after lots of repetition, but I hope we at least do it again for the first game next year.

But what song would you choose for next year? Keep the Skrillex? Go back to Sirius? Or use some other song? I'm really curious to see what you guys would suggest. And remember, the Jazz are reading.

There has been much talk about one Damian Lillard, he of Weber State. I like him a lot as a player, and do think he has tremendous scoring talent. I worry, though, about his point guard skills. The Jazz are famous for the pass-first point guard, and I don't think Lillard fits into that role. We have seen through having Devin Harris that the situation can cause some problems, including a stagnant offense. On the other hand, it would be difficult to give up a tremendous PG scorer, Russell Westbrook-lite type. The poll, then: